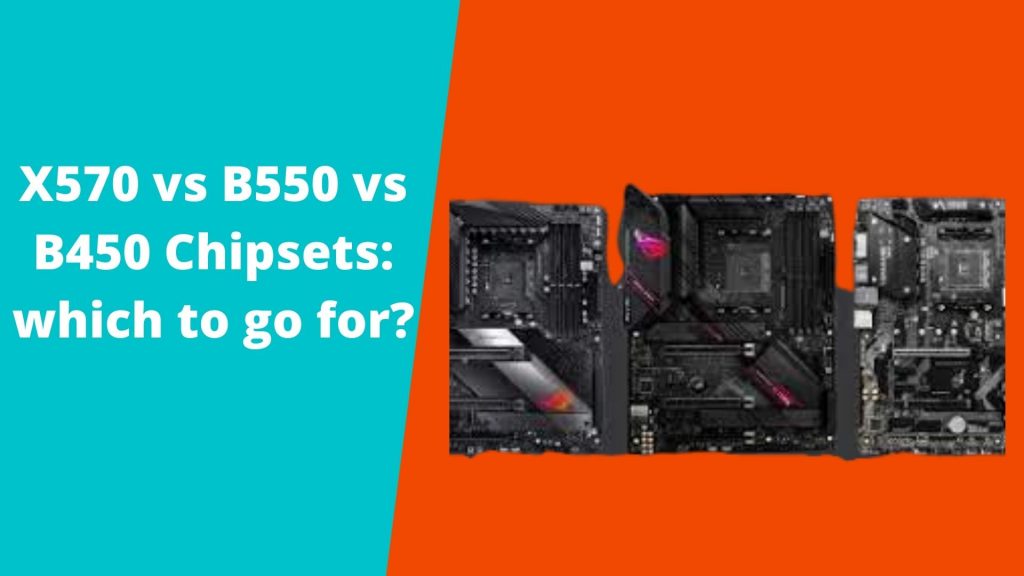 We all are aware of the fact that with each new arrival (especially AMD processors), we get to discern something new in terms of a motherboard chipset. Initially, people have two choices. Number one, to either upgrade their old motherboard (this is what we call BIOS flashing) or Number two, simply, get a new motherboard with a sequel to its predecessor. For example, B550 succeeds the B450 motherboard. But here’s the catch. You never know which processor will befit the best on which chipset. Many people have argued that X570 motherboards are best used for extreme overclocking.

On the contrary, the B550 motherboards have an issue with extreme overclocking and also are not backward compatible. These are the core values to keep in mind before buying any motherboard because you never know until you read the reviews or test the product yourself. That’s why, today, I will be penning down all the differences between X570 vs B550 vs B450 chipsets and which to root for at the end of the day. So, stay tight, and buckle up as the coming explanation will be no different than a roller coaster ride.

As far as supporting the processor is concerned, all of them (read: motherboards) would be able to do it perfectly. There’s a term known as BIOS flashing, and all of the motherboards are capable of flashing their BIOS. This is where people start being lethargic in terms of doing anything for their gaming PC. “Why to even buy a new motherboard when I can easily BIOS flash my older chipset.” Thousands of gamers have put forth this argument, and to be honest, there’s no clear resolution to it.

Many of the people would simply upgrade their previous generation motherboards because it’s feasible in terms of budgeting. With the advent of Zen 3 architecture, it’s best that you use the latest motherboards (X570 or B550 at the least) so you can harness the processor’s full power.

Markets pose the biggest threat to the integrity of the gaming world itself. While brand-conscious people will always root for expensive products, the people who are forced to use the older chipsets will know the real deal of using something ancient. Precisely speaking, there’s no end to it, and the marketing gimmicks will flourish unless people start standing up for their actual rights. Why would one spend $1000 on a motherboard just because it has a “GIGABYTE” name on it? This is where things start to get dirty, and you need to keep in mind that you always track your processor’s requirements. If buying a B550 motherboard is sufficient for it, then go for it. No need to get your hands dirty with X570. It would just be overkill.

This checking criterion is the most important one after the arrival of Zen 3 processors. There are some processor entries that will work like a charm on even a B450 motherboard but will lack some efficiency. Hence, a need for a decisive brain. Calculate how much performance you can juice out of your older generation chipset, and will it even make a difference? At times, people have a zero percent increase in the FPS even after they shift from B550 to X570 because it’s not a big jump.

If you are a current user of the B450 chipset and looking forward to having answers to whether you should upgrade to B550 or even to X570, then this session is just for you. First thing first, B450 is an older chipset which means that it comes with restrictions. To top it off, the chipset is already dying out in terms of availability. You can’t expect ancient things to survive this long, so yeah, the chipset’s death is inevitable. However, for the plus points, let me mention that the B450 is one of the finest chipsets to date.

For what it’s worth, the B450 chipset really doesn’t come with PCIe 4.0 support. Having that said, do read our PCIe 4.0 article because it’s a mandatory requirement in an ever-evolving world of technology. Don’t expect the new arrivals to be extremely backward in terms of support. Sooner or later, you would be in a dire need to upgrade, and that’s where B550 might help you out. Not to mention, currently, the B550 motherboard is Zen3-proof, which means you can really slot in any Zen 3 processors without having a fear of them malfunctioning.

For those, who want to live up with their time immemorial B450 chipset, then sure go ahead. The BIOS flashing is possible, but don’t expect wonders. You really will be crippling your processor’s performance. Not only this, but the majority of your components will be downclocked or downgraded to run smoothly with the boundaries proposed by the B450 chipset itself.

What are the advantages of having a B550 chipset over a B450 chipset?

I will be focusing on the X570 chipset here and will compare it against the B550 chipset. First things first, the X570 chipset is best for extreme overclocking, which means you can really juice out maximum performance from your components. Not to mention, X570 is reliable and future proof in terms of upgrading. It goes without saying because even older generation chipsets are compatible with the latest entries through BIOS flashing. It’s worth mentioning that the X570 chipset has a lot of PCIe 4.0 ports, which definitely indicates the expandability of the chipset itself. Now, you can experience faster data transfer rates with the help of dominant PCIe 4.0 slots on the X570 motherboards.

To top it off, all the M.2 SSDs will have a good time functioning on X570 chipsets because of the PCIe 4.0. For what it’s worth, the X570 chipset is itself known for expanding horizons in terms of pitching in value-added features for the user.

For what it’s worth, the X570 motherboard comes with a plethora of needed features like WIFI, Bluetooth, I/O shield, and fan headers. Although it’s true that you get hold of the same features in the B550 chipset as well, X570 goes a notch further in terms of overall support. For example, WIFI 6, Bluetooth 5.1 (advanced), 2.5G LAN, and USB 3.2 Gen2/Type-C.

As far as the B550 chipset is concerned, it does slip in all the required features but lacks skyrocketed performance. For example, the majority of the USB ports are outdated (for Gen 1). If you are into AMD CrossFire and Nvidia SLI, you don’t need to worry because both the chipsets extensively support these features; nevertheless, of the lineage difference between them. This is why I’m head over heels for these motherboards. AMD for eternity!

But, it’s also true that these technologies will die out soon. The people who invented these gems of features are long gone, and there’s no one who can propel them forward. The demise is inevitable, but it shan’t concern you at the moment because the support for multi-GPU is literally declining. The newer cards are more focused on single-core performance, and so are the new games. You really can’t achieve perfection while using two GPUs on high-end games. It is what it is, and you need to accept it.

What are the advantages of having an X570 chipset over a B550 chipset?

I believe this brings us to a close. I hope the above-mentioned points were comprehensible in every possible way. If you have any queries, do let us know in the comment session. And for the final deal, I would always recommend my readers to follow their hearts or simply take a leap of faith and buy the X570 motherboard. These are more user-friendly and are upgradable.