What is DDR5 RAM – Everything You Need to Know 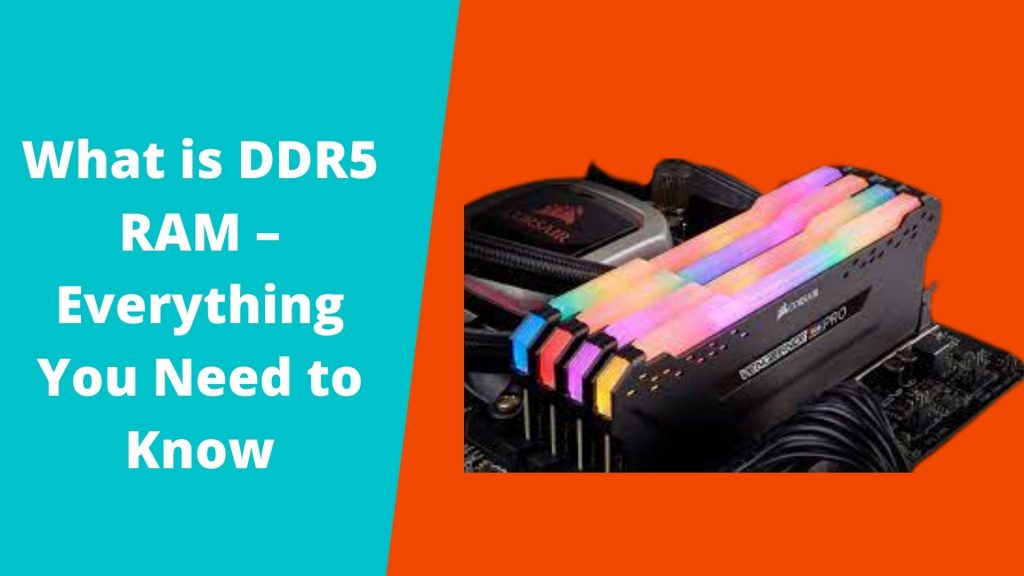 RAM is one of the few components in the PC industry that does not go through major changes every year. We have GPUs, CPUs, motherboards, and power supplies always coming out with better and newer models, as well. However, with RAMs, things are a lot different. With that said, years after DDR4 was made mainstream, we are finally heading into a new era with DDR5 as it has arrived.

DDR5 support is added into Intel’s new 12th generation processor and AMD’s Zen 4 chips that are going to be launching this year. However, at the moment, the Z690 Intel motherboards that are available give you a choice between DDR4 or DDR5, so if you do have an older memory, you certainly can upgrade if you want.

But what is DDR5 RAM? How fast is it? What do I need to run it? These are some of the common questions that are available and you will be surprised to know that it is not at all complicated and we are here to help you get the right answer. So, let’s not waste time and get started.

Let’s get started with putting the basics where they should be. So, what is DDR5, to begin with? Well, it is the next evolution in the PC memory. The newer version is mainly focused on having an increase density and bandwidth of the RAM but at the same time, lowering the power consumption of the memory kits.

But wait, there is more.

How Much DDR5 RAM Will My PC Support?

When you are looking at DDR4, the largest consumer modules that you can buy will max out at 32GB. However, DDR5 can quadruple that technology; this means that a typical mainstream PC with four DDR4 DIMM slots will max out at 128GB.

But, if you are building a cutting edge system with all the tech possible in the world, you can even go with 512GB with just 4 slots and yes, this is DDR5. However, if you want to stop pulling all the punches and build a PC that has 8 RAM slots in the motherboard, then you can expect to go as high as 1TB and yes, that is as ridiculous as it sounds.

Okay, this is something that most people don’t know but when you are talking about needing that much RAM, it does not matter. Especially if you are an average consumer who is just looking to have some good time, playing their favorite games and running their basic tasks. For gaming and even video editing/rendering, you are more than okay with having anywhere from 16 to 32GB of RAM.

Related Article: Best DDR5 Motherboards for Next Gen Gaming in 2022

However, not everyone is going to use their PC the same way, and therefore, you might not need to have 1TB or 512GB RAM in your computer, you might run into a person who does… well, for purposes such as scientific calculation, computational tasks, and more.

The point here is that DDR5 capacities can go as high but you don’t have to go just for the sake of that.

How Much of a Bandwidth Boost Should I Expect?

According to the RAM manufacturer Micron, there is a 36% increase in the bandwidth when you compare DDR5 and DDR5 at the same data transfer rate. The company even tested a DDR5-4800 module and it offered 87 percent increase in the performance against a similar DDR4-3200 module, which is impressive, and to be honest, bonkers.

There is no denying that DDR5 RAM kits will be bringing a lot of improvements. However, the same cannot be said about the overall latency. Apparently, according to Corsair, the single-access latency is not changing at all, whereas Column Access (CAS) latency is slightly worse. Corsair further commented how the overall latency of a flagship RAM kit will be the same as a DDR4 module, which honestly is not a bad thing.

What About Overclocked DDR4 RAM Kits?

Sure, you can just go to your closest computer store and get a DDR4-5333 RAM but one must always remember that those RAM kits are technically beyond the official limits for the memory. The official limit for DDR4 is 3200 MHz. However, RAM makers reach the higher data rates by overclocking the RAM kits from the factory.

DDR5, however, starts from 4800 MHz and will be going as high as 12800 MHz as well. With this out of the way, you must also remember Micron’s testing which shows that even at the same data rate, DDR5 offers 37 percent more bandwidth than DDR4. Which already is an impressive achievement.

Will I Pay More?

Price is one of the things that a lot of people are actually concerned about whenever they are in the market. Well, as with any new technology, you are expected to pay more and same is the case with RAM kits, as well. For starters, Samsung has stated that consumers should expect DDR5 to cost at least 30 percent more at introduction, however, this is just for the chips.

If you are to go on various online retailers, you can compare the prices and in most of the cases, you are looking at a higher price for DDR5 than you would pay for the DDR4. However, it is also important to know that as DDR5 is going to go mainstream, you can expect the price to get lower and lower.

This is another question that has been roaming around the internet. You are looking at newer technology that is going to offer higher capacity and higher bandwidth as well. This means that the RAM kits should theoretically run hotter. However, the added heat is not just going to be because of the chips running hotter .For starters, with DDR5, voltage regulation for the RAM will be happening on the module. This was different in DDR4 where the voltage for the RAM was located on the motherboard.

This means that while it would make motherboards be lesser complex and will allow RAM makers more control over the memory kits and the ability to optimize the power delivery. This will come at a cost, however, because due to the voltage regulation being on the memory itself, there will be more heat generated.

However, there is not much to worry about as most of the RAM makers like Corsair, G.Skill and more will incorporate their own designs in order to ensure that the RAMs run cool and at their optimal performance, as well.

Understanding ECC on a DDR5 RAM

Another change that is coming to DDR5 as opposed to the older generation is how ECC (error correction control) works. This feature is responsible for detecting multi-bit errors and correcting single-bit errors. However, this time around, this technology works differently.

To make it simpler, with traditional ECC memory, the error detection and control is performed at all levels. This means that the starting from RAM to the CPU, all the data is checked and ensured that there is no error. However, with DDR5, ECC is integrated into each actual RAM chip, but once it leaves the chip, it starts a journey towards the CPU and there is no ECC performed, meaning that the errors that do come along the way will not be handled.

But why the sudden change? Well, it is mainly being done because one cannot really quadruple the density of the chip without adding more layers of safety. ECC was something that was mainly found in servers and workstations because it was used in situations that were critical or important to a point that even a small error could have caused massive issues. However, with DDR5, the on-die ECC is something that had to be implemented so the RAM is actually capable of higher speeds and higher density.

The result is that consumers are not going to get full ECC RAM support. However, commercial CPUs and RAMs will still bring support for full ECC.

Can I Still Use Newer CPUs with Older DDR4?

This might come as a surprise to some but Intel’s 12th generation chips actually come with support for both DDR4 and DDR5 along with lower power variants. Sure, Intel did bring the 12th generation CPUs with DDR5, but considering how the DDR5 technology is going to suffer from higher prices and lower availability, there are motherboards out there that do support DDR4 as well.

In case you are wondering, this is not the first time that has happened. Back when DDR4 came out, the motherboards of that time supported both DDR3 and DDR4. Sure, you would have to invest in a different motherboard altogether, but the option for there.

Is DDR5 Going to Offer Any Future Proofing?

Future proofing really is not something that is common, to be honest. However, if you are wondering whether DDR5 is going to offer any future proofing or not, there is no real answer to that. If you want to know further, just look at the memory transitions of the previous generations, the price premium was never really worth it for those who are looking for better overall performances.

That was mainly because the newer RAM normally started at very conservative speeds and timings, and older RAMs managed to benefit from years of being made faster and faster.

Things have started to change with DDR5 mainly because it is going to offer better bandwidth right out of the box even when you compare it right away to the fastest DDR4 RAM kits available in the market. However, it is important to keep in mind that even with faster memory bandwidth, you might not get better overall performance aside from certain applications like integrated GPU performance but that is a different topic altogether.

Okay, this is the glaring question for a lot of us. Should I really upgrade? Well, this depends. I am still running the PC I built back when Intel’s 8th generation came out and I am happy with it in terms of the performance. I can comfortably game at 4K and that is all that matters to me.

However, as someone who is building a new system, the smartest thing to do would be to go for the latest hardware if budget is not an issue for you. The reason why I believe DDR5 is not for those who are looking to upgrade just the RAM is simple; you cannot really run DDR5 on older hardware, so if you want to change your RAM, you will have to buy a new motherboard, a processor, and possibly a cooler as well, the cost of all these combined will not be cheap.

There are a lot of factors involved in me saying that you should not be upgrading to DDR5 RAM just now. Aside from the fact that it is a newer technology and the prices are comparatively higher than what they would be after a few months. Another glaring issue is that the world is going through a chip shortage and we must keep in mind that about how that could hike up the prices as well.

Additionally, unless DDR5 proves to be really powerful in games and the 12th generation Intel processors and 6th generation AMD processors can actually benefit from faster speeds, there is not a lot of reasons for one to simply change the entire platform for the sake of changing RAMs.

It does look promising and I cannot wait for the new memory to become standard and fully mature but for early adaption, I’d advise the users to stay away.