Upcoming VR Headsets for PC, Playstation, and Xbox in 2023 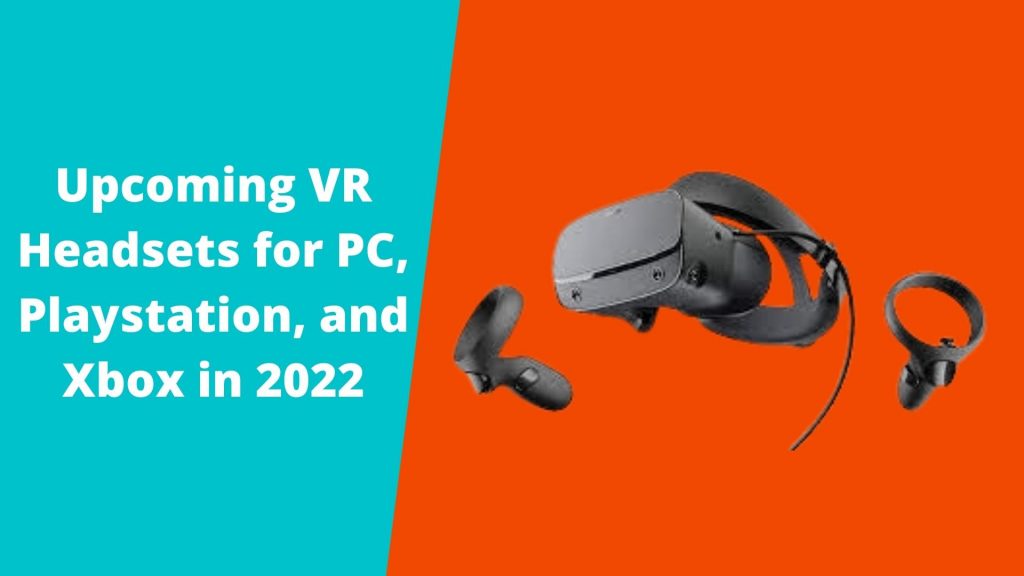 Virtual Reality (VR) is becoming more and more common and affordable, as time passes. With such amazing advancements in the computer technology world, that has given us such powerful processors, graphics cards, etc. The devices that we use, whether it’s our smartphone, laptop, or a desktop PC, they have all become powerful. That power is necessary when it comes to VR headsets because the computer not only has to run the game, but it also has to keep track of the sensors.

With advancements made to the VR headsets, now VR headsets come with the latest technology and the features that come with it. The latest VR headsets feature better resolution to provide you with a more immersive VR experience.

Here we will be going through some of the new VR headsets coming out.

Although HTC has struggled to remain relevant in smartphones, HTC sure is hanging on in virtual reality. As Oculus Quest has seen huge success, HTC is planning for the future with their Vive (Project Proton) concept. HTC showed off their Project Proton VR headset along with their Cosmos VR headset, but HTC’s Proton is not ready for its prime time yet. These VR headsets can change the game if they do launch.

Now, the company has a couple of concepts for their Project Proton. One of them is an all-in-one model, and the other one is a two-in-one model, which requires an external device like a computer or a phone. Their renders do look much slimmer than the current-gen headsets, but comparing them with the non-smart glasses is indeed a bit of a stretch.

Probably for the inside-out tracking, the all-in-one VR headset features a pair of cameras. However, that is lesser than like the Oculus Quest, but HTC may believe that the technology will improve by the time Proton comes out. There is no band across the top of the head, and it uses a modified halo-type head strap. This strap does not attach quite as high on the headset because it is counter-balanced by the processing hardware on the back.

Proton concept two-in-one version looks similar from the front, but it has a simpler strap. There is a cable that emerges from one of the supports where they would wrap around the head. Since it is a single cable, it is probably a USB Type-C cable that connects to the PC for both power and video. The headset features the same dual-camera setup, but it lacks the integrated speakers that the all-in-one version has.

There is no information provided by HTC about the display tech, internals, or pricing of these headsets.

HP officially announced their HP Reverb G2 VR headset, which is a follow up to their last year’s surprise hit Reverb VR headset. The original Reverb that launched last year provided the users with the highest resolution available on any headset in the consumer price range at the time of its launch.

The HP Reverb G2 is also a tethered VR headset, like the original Reverb VR headset. The G2 emphasizes enterprise clients, while it also maintains its precise use in the consumer market for those who want (or need) the power to drive more robust experiences than the mobile standalone.

HP Reverb G2 VR headset is a result of a collaboration between HP, Microsoft, and Valve. It also maintains the 2160 x 2160 resolution per-eye, which focuses on visual optimization in the new LCD panels that will be mura-free, according to HP. It will have a 114° field of view.

The HP Reverb G2 also features the Valve Index’s industry-leading spatial audio speakers, as part of their collaboration with Valve. The speakers sit 10mm off the ear, unlike earbuds or over-ear headphones, spatializing audio to deepen the user immersion.

To bring you the ultimate VR experience, Microsoft has been collaborating with HP and Valve. Microsoft has seen a recent uptick in competition with Sony.

Sony has already put themselves ahead with their PSVR. Half-Life: Alyx broke ground with its revolutionary incorporation of VR technology, which means that Valve is indeed a valuable ally in VR development. However, Microsoft has not made any formal announcements regarding the release of its VR headset, just like Sony. But, we can talk about the exciting features that it could potentially have.

Firstly, HP has claimed that it will provide a more comfortable, immersive, and compatible experience than the previous generation and also vows to set a new standard of VR technology.

The fans are speculating that this VR headset could be very close to HP’s successful Reverb headset because there are no official specifications revealed yet. The HP’s Reverb headset features 2160 x 2160 resolution per eye.

Some gamers do think that the Next-Gen VR Headset of the HP’s Reverb headset will be aimed towards the professional players than the enthusiasts. Mainly because their best-selling headset to date, the Index, features state-of-the-art motion tracking technology, and it is priced for professional gamers.

The Xbox VR headset is also one of the VR headsets coming soon, which gives us something to look forward to.

Oculus is hard at work on their next installment of VR headsets. However, Facebook’s upcoming VR headset, the Oculus Quest 2, is probably delayed to 2022 or later.

Facebook has not stopped testing the massively popular Oculus Quest’s potential predecessors, even after the delay. What’s interesting is that some of the testing models are reported to be lighter, smaller, and quicker image refresh rate to prove a more realistic and immersive VR experience.

Facebook is also experimenting by removing the fabric on the sides of the new Oculus Quest 2 Virtual Reality headset and replacing it with plastic, which does make it look more like their popular Oculus Rift S VR headset. There has been talking about replacing the current model’s Velcro head strap with something elastic to make it easier for the users to put it on and off.

As mentioned earlier, the delays will probably push the release date to 2022 or even further. However, Oculus is taking advantage of this unexpected downtime and are developing an AR headset as well.

CNET has reported that Apple is planning to release its new Virtual Reality headset (VR) and Augmented Reality headset (AR) capable headset in 2020. The tech giant is hoping to get the same levels of excitement that was last seen when Apple released its original iPhone with this new immersive product.

Bloomberg reported earlier this year that Apple held secret meetings with AR parts suppliers at the Consumer Electronics Show (CES) 2018 in Las Vegas. Previously, it was believed that Apple might be planning to reveal AR glasses later this year. We got to see some exciting products from the other manufacturers such as the Oculus Go, which gave hope that AR could become mainstream this year in the same way that the iPhone transformed people’s perceptions of smartphones when it was released in the year 2006.

Apple is expanding beyond their iPhones; the project T288 will be the first headset manufactured by a major consumer electronics company to support both AR and VR. But, Apple will have fierce competition from HTC and Oculus.

Apple’s new project that is codenamed T288 will be featuring double the resolution of today’s most advanced headsets as it will be equipped with 8K displays per eye. It is rumoured that Apple’s T288 headset will be a standalone product, just like Google’s Daydream View or Samsung’s Gear VR. The cameras will be built into the headset to detect the surrounding areas, according to The Verge. This Apple T288 headset will connect with a box containing the Apple processor, while the other hardware connects via 60GHz wireless ‘WiGig’ technology. This new Apple processor’s power is described as exceeding anything available in today’s market by CNET.

A patent by Sony for a new motion controller design hints at the PSVR 2. The newly published license is for a controller device that is shaped similar to a Wii controller, which has finger-tracking sensors that can determine which user is playing and also the distance between the controllers themselves. Also, the CEO of VR developer Ndreams agrees that Sony’s VR technology is quite dated now. If VR is going to continue beyond a year or two, they will need to update their hardware.

Sony is cooking up something to step up its VR headset game. However, O’Luanaigh predicts that Sony’s next VR headset will probably not be released around the time PlayStation 5 is released. The PSVR 2 headset will likely be released as a mid-gen upgrade. But, Sony has not made any confirmation about the PSVR 2’s release date so far. But, we can talk about the exciting features the headset will have in the meantime.

Sony’s second-generation PSVR headset has quite a few rumors going around for it. It will give you the freedom of mobility that will only enhance your gaming experience since the headset will strap around your head. Also, cameras will abound on the next generation PSVR, rear-view cameras, and cameras on the controller, which will allow for a more immersive AR experience. Also, these cameras will allow you to bring the game into your living room, as they will track your motion from all 360 degrees.

What are the minimum requirements for PC compatible VR headsets?

The content for the VR headsets like the Index, Rift, Vive, and Windows is getting better and better since their respective launches. Now, there is more reason to finally jump into the Virtual Reality world, especially because the prices of these VR headsets have gone lower. Those gamers who want to buy a VR headset have a significant question, that is: will my PC be able to handle it? Here is how to find out.

Keep in mind that VR gaming is much more resource-intensive than monitor gaming. That is because the render resolution is much higher than 1080p displays that are used by most of the PC users today. Also, the VR games must be rendered in 3D and anywhere from 80 to 144 FPS, which depends on the headset.

Are all the first-person new games playable with VR headsets?

Those days are gone when the libraries used to be limited and repetitive experiences. Since virtual reality is becoming more mainstream now, because of this, the gamers now get a wide range of VR games to choose from, and whether you like the high-octane shooter games or the slow-and-steady puzzle games, you will be able to find a world to get lost in. Nvidia Ansel provides a third party VR experience in most of the Nvidia Game Ready titles like Assassin’s Creed, Mirror’s Edge Catalyst, and Far Cry series, etc.

There is a wide range of first-person new games that are playable with VR headsets such as Half-life: Alyx, Superhot VR, Beat Saber, No Man’s Sky, etc.