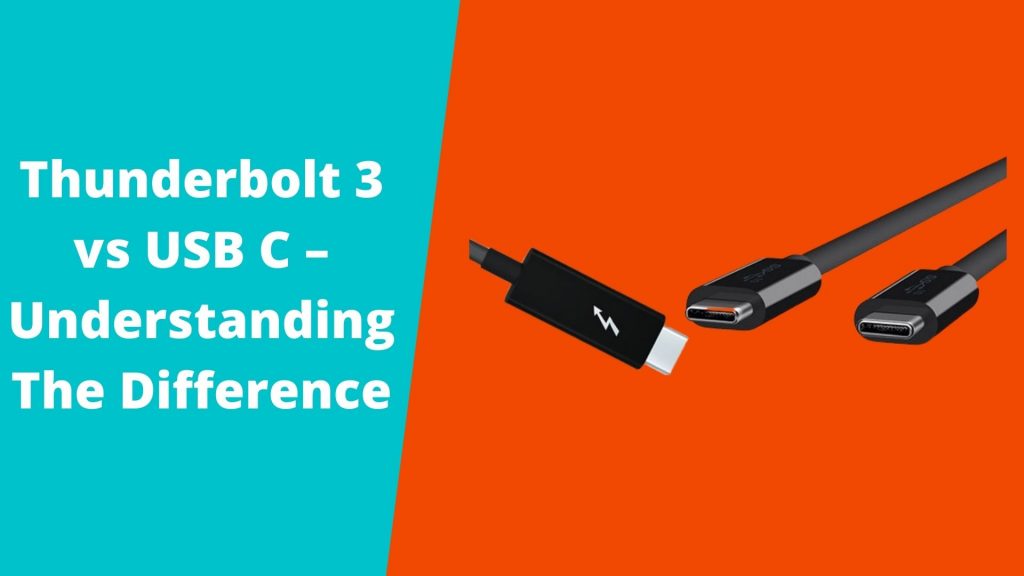 There is no denying that the world of tech has changed a lot over the past couple of years and all for the right reasons, to be honest. Everything about our smartphones and other chargeable devices just keep getting better and better and in the middle of all of this, the USB standards have improved, as well.

The latest port known as USB Type C or USB C took the world by storm when it was first announced. Sure it took some time for companies to finally adopt it but it is on its way to becoming a universal standard of USB.

Whether you are looking to charge a mobile device or just connect a peripheral to your computer, the chances of you finding a USB C port are a lot higher. However, what if I tell you that aside from USB C port, there is another port that looks exactly like it? Yes, I am indeed talking about the famed Thunderbolt 3 port which surprised all of us.

Now, normally, when it comes to telling the difference between a USB port and some other port, the process is rather easy because of how different both ports look. This is not the case when you are discussing the USB Type C port and Thunderbolt 3 port because in terms of looks, they are both identical and this is where the confusion arises.

If you are someone who has been wondering about Thunderbolt 3 vs USB C, then you are at the right place as we are about to dissect and find out what differences are there, in the first place.

Before we go any further, let’s try and understand USB C first. It is an industry standard connector that is used for transmitting both data and power on a single cable. The USB C connector does look similar to the micro-USB connector at first glance, however, when you look closer, you notice that the connector is in oval shape and is slightly thicker as well. The best thing about this connector, however, is the fact that it can be flipped.

Yes, the USB C connector works exactly like Apple’s Lightning port in terms of connection as you never really have to figure out which side is the correct one. Whether you are plugging it upside down or the opposite, as long as it is lined up, you are good to go.

For those who don’t know, the USB C connector was created by USB Implementers Forum (USB-IF) This is a group of companies responsible for developing, certifying, and bringing forward the USB standard over the years. The group comprises over 700 companies in the membership including the likes of Apple, HP, Dell, Microsoft, as well as Samsung. This is one of the reason why most of the modern devices from these manufacturers as well as some other manufacturers ship with USB C connectors. Hard drives, smartphones, as well as smart home devices are among few devices that have these connectors either for data transmission, power, or both.

At this point, it is safe to say that the USB C is slowly becoming a single connector that will be used everywhere. When rightly created, this port is capable of transmitting data at speeds up to 20Gbps and delivers up to 100 watts of power that you can use to charge your devices. In several cases, it is also capable of transmitting DisplayPort audio and video signals, allowing you to connect your devices to external monitors, as well.

However, it is important to understand that not every USB C port will be capable of doing so. For instance, a USB hard drive cannot output a signal as it will only use the Type C port for power and data transmission. Similarly, a Galaxy S20 Ultra with the same port will be using the port for data transmission as well charging the device. This means that you are getting your hands on a single port but it does have various uses and implementations.

Is Thunderbolt 3 the Same?

If we are talking about looks, then yes, the Thunderbolt 3 port is the same as USB C port. Since the connector is the same from every perspective. As a matter of fact, in several of the cases, they do everything a USB Type C port can do, however, they can do it at a much faster rate. Why is it so? Well, Thunderbolt 3 is a superset of USB C, which means that you can plug a USB-C only device into a Thunderbolt 3 port on the computer and it will work just fine.

However, there is more good news about Thunderbolt 3. Not only does it allow you to transfer data from one device to another faster than a standard USB C. It does bring some exclusive features as well that allow you to connect expansion docks as well as external monitors. A USB Type C port with support for Thunderbolt 3 means that a single cable is all you need to actually use a lot of power and transfer a lot of data at the same time to and from a computer.

Now as far as adoption is concerned, some companies decided to start using specific ports a lot faster than other companies. With Apple being one of the first companies that started using Thunderbolt 3 for their desktops and laptops. Video-output capabilities are of course varying by the system but there are iMacs that are capable of supporting dual 6K displays connected via Thunderbolt 3 cables.

Apple aside, more and more Windows-based computers as well as peripherals are now shipping with Thunderbolt 3 support. You can easily find the support for these ports on latest ultraportable laptops as well as ultrabooks. Not just that, expansion drives and docks are also supporting this port.

Like I have mentioned before, Thunderbolt 3 ports on a computer are backwards compatible with USB C devices. Which means that if you do have some peripherals that support Thunderbolt 3 port and some that support only USB C, they should be able to work together just fine, however, there is going to be the case of slower speeds.

Now that you know the differences when we are discussing Thunderbolt 3 vs USB C, one would think that it is easy to tell them apart, sadly, that is not the case. Sure, Thunderbolt 3 is a lot more capable than the one that does not have support for it, but telling the difference can be a bit more complicated.

For starters, the Apple MacBook Pro variants can go as high as four Thunderbolt 3 ports but not a single one of the has a label or a marking on them. The same is the case with USB C ports on some other devices without Thunderbolt 3 support.

In such cases, being able to tell which port you are looking at can only be possible through looking at the product description or documentation that has been supplied by the manufacturer of that device that you have.

Additionally, some devices with Thunderbolt 3 support actually have a thunderbolt logo next to the port, allowing you to have an easier understanding.

Then you have devices in the market that come equipped with both USB-C and Thunderbolt 3 ports and in those cases, the only way to tell the difference is by looking at the thunderbolt logo that is next to the port.

Moving forward, USB C ports that do not have the support for Thunderbolt 3 capabilities could have a label like USB SuperSpeed SS on them along with a number that indicates the peak speed of that port.

Regardless of the way you look at it, the USB C/Thunderbolt 3 labeling still remains to be inconsistent even on the most powerful and modern computers available in the market. Therefore, the best way to tell whether the USB C has Thunderbolt 3 support or not is just by checking the documentation or the product image.

Thunderbolt 3 vs USB C – Which One Should I Use?

After knowing that Thunderbolt 3 is clearly superior, a lot of people still wonder if they should be using USB C after the fact that the former is a lot faster. However, things are a bit different in reality. The thing is that unless you have a specific use case for the Thunderbolt 3 port, it makes no sense for anyone to use it specifically.

I mean, what is the point of using Thunderbolt 3 port if you do not have a single device that supports it. With that said, you also need to know that both connectors are compatible with each other so you can always just connect them and take full advantage.