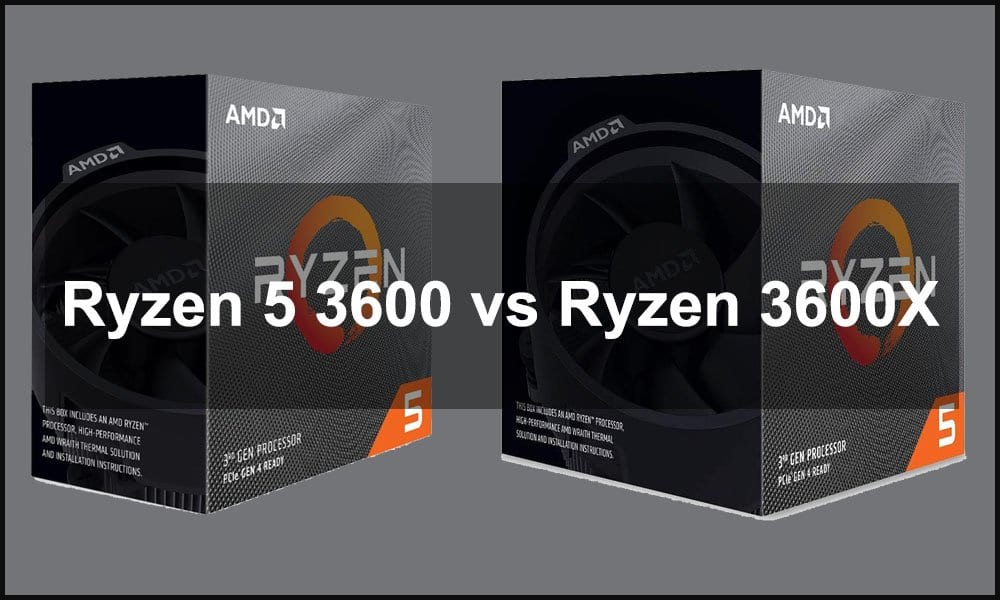 If you have been in the market to build a good gaming PC, it is safe to say that choosing the right processor has always been one of the most important things for you. As it should be. Not going with a good processor can cause you more issues than you might know. Now, one of the most common processors in the market that are being used for gaming are the Ryzen 5 3600 or the Ryzen 5 3600X AMD.

These processors are selling like hotcakes, and one look at Amazon and you will realize how popular they have become. So, what seems to be the problem? Well, the problem is that most of the time, people don’t know where to get started as far as the differences between these chips are concerned.

Now, even though they are very similar and belong to the same socket, you will find them competing every time you are trying to make a decision. We are going to make things easier for you by telling you the differences between the Ryzen 5 3600 and the Ryzen 5 3600X.

The purpose here is to cover all the basics so you do not find yourself buying something that simply is not what you were looking for.

We should start with getting obvious out of the way by discussing the specifications of each of the processors that we are looking at. That way, we are at least going to be sure about what you are getting into. Once we have those out of the way, there is not much to stress over as every other factor is going to be more or less the same.

Now, after examining the specs, it is safe to say that both CPUs are a lot similar than one might think. Both of the CPUs only have a 200Mhz difference between the base clock and the boost clock with the Ryzen 5 3600X being faster.

In addition to that, you also see that the Ryzen 5 3600X has a higher TDP (Thermal Design Power) of 95W. But, according to a lot of test results that are available all over the internet, you would find out that a simple stress test that is designed to put both CPUs under the same load will result in the Ryzen 3 3600 consuming only 4% less power as compared to the Ryzen 3 3600X.

This means that the Ryzen 5 3600 would draw 140-watts compared to the 146-watts of the Ryzen 5 3600X. Needless to say, things are not looking good for the Ryzen 5 3600X, and even though the price difference is small at just $50, there is more to be uncovered than what we know.

Right out of the gate, I can tell you that both these CPUs are going to be good for productivity tasks as well but most people have been buying them for the sake of gaming. After all, getting 6 cores and 12 threads at such attractive prices is something that catches even our attention.

So, how do they perform in the gaming section? Well, we looked at numerous comparisons, and thanks to HardwareUnboxed, we finally managed to see what the difference between these CPUs is. For reference, the GPU used to test the games was an RTX 2080 Ti and the resolution was set to 1080p as that is the most common setting on which most people be gaming and this also eliminated any bottleneck, to begin with.

The results are honestly surprising, and you can check some benchmarks of the more popular games below.

The difference is in front of you and I will not even tell you to look closely because of how minor this difference is, to begin with. Granted, the higher clock speeds do give the Ryzen 5 3600X some advantage, but this is such a small advantage that you are barely going to notice that.

If you are strictly buying either of these processors for the sake of gaming, you should just close your eyes and go for the Ryzen 5 3600 and save that money to buy yourself a game from Steam or something else because spending extra money is not worth it.

But What About Productivity?

Don’t believe us? Look at the table below.

Yes, I understand that the scores are better for the Ryzen 5 3600X, but it is also important to note that the difference that is being shown here is minor at best and you will not be able to break any speed records with such a minor difference.

The difference is so small that in almost all the cases, you would not even notice the difference and that is why the Ryzen 5 3600 makes up for a compelling choice here rather than spending the extra money.

Thermals or the generated heat in CPUs are subjective to a lot of factors that can increase or decrease them. Therefore, if you are comparing two CPUs, it is important to test them under the same setting or else you will be getting varying results and that is not useful to the comparison.

To compare the CPUs, we decided to use the same configuration and stock coolers that shipped with both coolers. When monitoring, the Ryzen 5 3600 managed to reach 81 degrees Celsius in our testing, and the Ryzen 5 3600X topped at 78. Now, the reason why this difference is there is because the latter ships with a better cooler, as well.

You can swap the coolers and see the results improving on the cheaper version. This means that if equipped with the same cooler, the performance will become almost equal. The point of this comparison to make sense of the premium you are paying, and after this comparison, it has started to seem like that the Ryzen 5 3600X costs more because of how it ships with a better cooler.

Now, as far as you are looking at the overclocking potential of both CPUs, it is important to understand that the biggest argument that goes in the favor of the Ryzen 5 3600X is that it is going to be better at overclocking. Why? Because it is a specially binned version of the 3600, which should give it better performance in overclocking.

While the official statement does make sense, but professional overclockers from all over the world have concluded after several tests that both the Ryzen 5 3600X and Ryzen 5 3600 simply cannot go beyond the maximum overclocking of 4.3GHz. This means that if you are spending money on the Ryzen 5 3600X just for the sake of better overclocking performance, you are going to be left disappointed as it simply does not achieve more.

So How are These Processors Different from One and the Other

I have been going over the results that we managed to get our hands on for both processors. Right out of the gate, the $50 premium of the Ryzen 5 3600X sounded a little superficial because you cannot make a lot of improvements at such a price. Therefore, after further testing both CPUs, here are some points that make the Ryzen 5 3600 a more compelling option.

The reason why I wrote these points separate from the conclusion is that these are going to help you have a better understanding. Based on these points alone, the Ryzen 5 3600 ends up being a sensible choice. If you are on a budget, save that $50 and spend that on a beefier CPU cooler and you will be set.

Honestly, after testing both CPUs, the conclusion is a lot simpler for a lot of people. If you are in the market looking for a new mid-range gaming processor that offers not only great performance but also great value for money then getting the Ryzen 5 3600 over the 3600X makes every bit of sense.

Additionally, you will also see the Ryzen 5 3600 going for sale frequently as compared to the older brother, so might be getting a great deal in the market.

In case you are wondering why the 3600X exists in the first place, we are as confused as you are. It could exist simply as jargon that can trick customers into paying a higher price for more or less the same performance. The $50 premium that you are paying can be spent on a different component or a game from your favorite platform.

The performance difference is minimum, to say the least, but if you want your Ryzen 5 3600 to perform just as good as the elder brother, the one thing that you can do is spend that $50 on a decent air cooler, and overclock the CPU just a bit and you will be getting the same performance across the board.

We hope this test clears any confusion in your mind about both processors, because while we had them too; proper testing was to reveal what is going on.