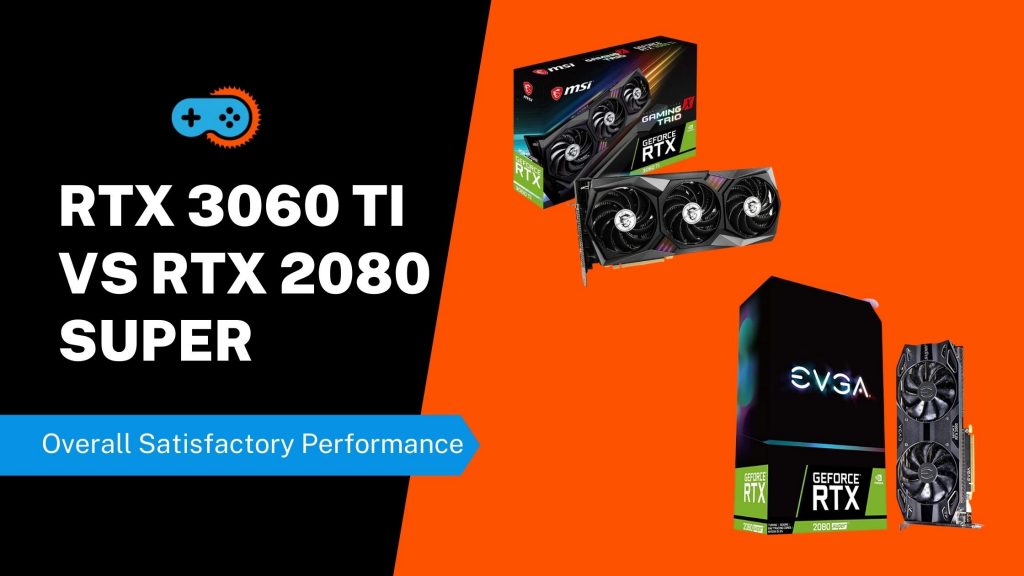 It’s natural to believe that the fight between RTX 3060 Ti vs RTX 2080 Super is predominantly biased. How could one compare a new lineage card (3000 series) with that of its predecessor? Well, at times, you really need to compare two cards when the new one costs you way lower than the one in the previous lineage and performs 5-6% faster. I know right, it’s astonishing!

From here onwards, I’m going to dissect the article into two portions. The initial one will be about RTX 2080 Super and the latter for RTX 3060 Ti. Then, while concluding, I’ll be comparing the two products and present a final verdict regarding the GPU’s overall satisfactory performance to that of its rival.

Like a blazing star, RTX 2080 Super has cornered RTX 2060 and RTX 2070 Super in a plethora of ways. For now, the non-super variants are just out of the question because comparing them equals the sheer headassery of comparing Intel Core i3 to Intel Core i9. No, I’m not trying to be condescending, but it’s true.

RTX 2080 Super follows the footsteps of RTX 2080, but in a more fashionable way. It’s also true that the performance of RTX 2080 Ti is a little higher than that of RTX 2080 Super; however, the 2080S is just a wonderful graphics card when it comes to 4k gaming, extreme overclocking, and flawless rendering.

Before moving on towards the performance analysis, let me share this information that the RTX 2080 Super will marginally differ in terms of performance, overclocking, and different features depending on the variant chosen. For instance, for you, the MSI version works like a charm when compared to the Gigabyte variant. Not to mention, the core concept of CUDA cores and Tensor cores remains the same. What makes the variants different is their attribute sharing and complex mathematical catering with the CPU.

When you have Turing-architecture embedded on a 12nm die size, what do you expect? The Best part about the GPU is that it consists of 13.6 billion transistors coupled with 3072 CUDA cores. When these cores run in conjunction with the CPU, wonders happen. I’m not just talking about RTX 2080 Super, but any sort of card out there.

The GPU offers a base frequency of 1650 MHz, which can be boosted to 1815 MHz. For overclocking, what you can do is go a little further, but again be aware that it can impair or devoid your GPU from its warranty. However, it’s not a big deal.

This section of the article might bamboozle you at first because we are not specifically targeting games but giving an overlay of how generated reflections, lighting, and Gravity works on a particle system. The RTX 2080 Super was able to run 6% faster than RTX 3060 Ti, with a slightly better reflective index on games.

It’s also worth mentioning that the GPU was able to cross a 14% margin on an overclocked profile. Basically, you can expect around 160-250 FPS on the overclocked GPU. It doesn’t stop here; the GPU is also, on average, 137% faster than its counterparts.

What sort of games can you run the RTX 2080 Super?

To be honest, with this GPU, you can expect games like Battlefield V, Control, JX3, Metro Exodus, and Shadow of the Tomb Raider to run at a constant 60 FPS on 1440p. However, the generated FPS are subject to change, depending on the model of CPU attached. It’s no doubt that the RTX 2080 Super has the potential of running games at a constant 60 FPS, but what matters the most is the decent pair up of a CPU.

You can also expect the GPU to run all the latest triple-A titles. Well, for the 4k settings, you need to keep in mind that you also will be in dire need of a suitable IPS or TN panel monitor. Without a withstanding monitor, you won’t be able to render images at 4k.

The RTX 2080 Super costs you above $800, but the RTX 3060 Ti is short of $300, costing you around in the range of $400-$500. How is it so? Although the GPU is recently released and sort of brings in the Ti modularity yet it’s inexpensive. Here’s the deal, the GPU sets a benchmark for entry-level GPUs. Basically, you can assume that the next-generation games will be taking in RTX 3060 Ti as an entry GPU that is cheap, functional, and able to run games at 4k.

The RTX 3060 Ti is based on the same Ampere Architecture as that of RTX 3080. Surprisingly, on the Watch Dogs Legion and Assassin’s Creed Valhalla, the ray-tracing option literally morphed the in-game world into something mystical and breathtaking. It’s also true that you need other equally competitive components to make this happen.

The 8GB card is sort of enough to power on 4k versions of the game. The GDDR6 memory aids in manipulating the overall performance of the GPU. Apart from this, the 39 Ampere Streaming Multiprocessors and 4864 CUDA cores are a sight that’s magnificent and worthy of praise. To be honest, such a number of CUDA cores coupled with Tensor cores give the GPU its AI functionality. Not to mention, the same number of CUDA cores also aid in manipulating complex mathematical and graphical equations on rendering and gaming.

When it comes to design and ports, they sort of had a semblance to that of RTX 20-series lineage. Although a multitude of new shape-shifting was also implemented to make the RTX-30 series stand out.

First thing first, the card was placed on the 16th percentile out of 652 functional GPUs-2 percentages behind the RTX 2080 Super. On top of that, the average FPS scoring stayed between the range of 181-216 FPS. Moreover, the overclocked significance was much lower than what we expected. Here, RTX 2080 Super won the spot by 11 percentage points. The only place where the RTX 3060 Ti crusaded was on Value and shipment. It won from a 62 percent margin, indicating that the people are sort of going haywire when such a resonating and affordable is available.

I believe you can run any triple-A title to date. Basically, you can expect the card to skyrocket the overall performance of the games. All you have to do is set the right settings into place. For instance, you can expect Red Dead Redemption 2, Cyberpunk 2077 to stay at a constant 60 FPS on 1440p settings. However, on 4k, the card might stagger and only give you around 30FPS. It’s also worth mentioning that the perceived FPS is subject to change depending on the available components in your PC. Do not forget that the monitor also plays a vital role in determining the overall performance of the games.

Keeping this detailed comparison in mind, I would suggest that RTX 3060 Ti is best in every aspect, as on average, the card produced 7-8 extra FPS when compared to RTX 2080 Super. Imagine getting hold of RTX 3060 Ti at half the price of RTX 2080 Super. The only problem with the RTX 3060 Ti is that its base and boost frequency is lowered, but I guess the extra number of CUDA cores make up for it.