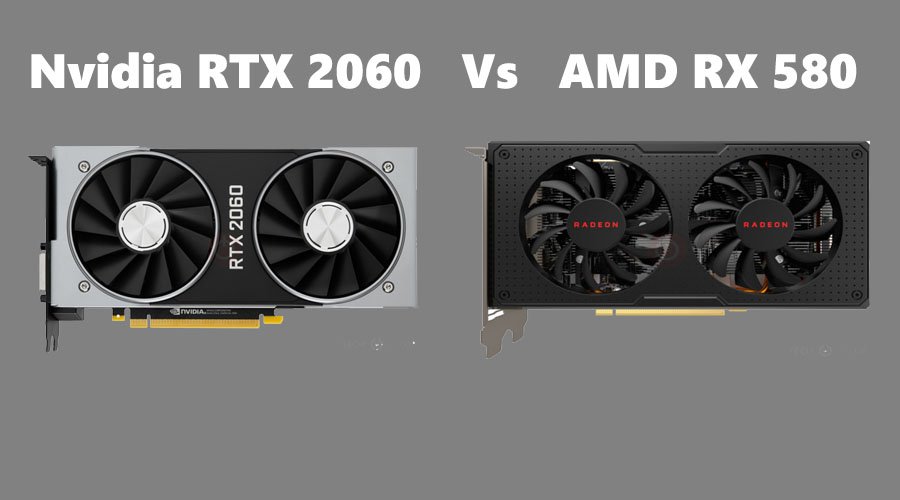 It’s a war between two legacy companies. Not a literal one, but it can be said so keeping the recent cross-arguments between the card-holders. It’s clear that the companies only care about expanding their dominance and it’s a see-through motive. Many gamers have been unleashing their dogmatic behavior just to degrade the opposition.

It should be crystal clear that the sole purpose of releasing the cards is to spread positivity and enhanced performance whilst rendering and gaming. These benchmark results focus on the two flagship models: Nvidia RTX 2060 vs AMD RX 580.

Well, when considering the rivalry between RTX 2060 vs RX 580, it’s apparent that Nvidia is taking the head start because of the newly incepted technology, known as Ray Tracing Technology. The opponent card is still withstanding with downgraded BIOS and ports, leaving behind inconsistent trails to perfection. Regardless, these cards were tested on a panoply of systems to record the performance data. It’s worth stating that AMD RX 580 is still a strong competitor, sometimes even beating RTX models.

There are slight variations in the process of manufacturing. Nvidia took their cards a step forward, inducing a completely new technology known as RTX. Whereas, RX 580 is still using Polaris architecture. RTX 2060 comes with 6GB VRAM, whereas RX 580 has two variants: 4 Gb and 8 GB. The complications sink in when these cards are put to action. The GPUs are made to process complex mathematical and geometrical calculations. Every model is earned with their referring and connecting speeds. It’s like how many embedded processors are working concurrently.

Nvidia makes use of CUDA cores which is predominantly proprietary and is only applicable on Nvidia cards. On the other hand, AMD makes use of open-source language to program their cards. It’s called OpenCL. These two-pole part processors have their dedicated speeds and acknowledgment tools. Based on performance and how the data is manipulated, the benchmarks will help you explain which card to root for at the end of the day.

Nvidia RTX 2060 6Gb makes use of Turing architecture. This profound architecture features AI systems that enhance graphics and provide real-time ray tracing technology. The idea behind incepting the new systemic approach was to cater to a future-proof system. As you must be aware of the fact that many new games that are coming into the market crave high-end systems. It’s worth mentioning that Nvidia RTX 2060 has remained out-of-budget users because of the price tag it comes with. It costs around $900, which is quite reasonable but also expensive at the same time.

RTX 2060 gives you the room to overclock the base frequency to the turbo frequency, resulting in boosted performance. After taking on-spree tests of the card, it can easily be said that RTX 2060 is the card of your dream. Although the VRAM might be less than the rival card, even those 6GBs speak volumes.

The card has 1920 CUDA cores and 336GB/s of GDDR6 memory, resulting in a better performance ratio to AMD RX 580. This specific card sets apart from RTX 2070, 2080, and 2080 Ti in terms of price tags. They are heavily expensive and can have a disastrous toll on your pocket. Considering that you want to experience RTX, then 2060 is what you should aim for.

Surprisingly, RTX also features Turing NVENC that is efficient and superior to CPU encoding algorithms. This results in flawless streaming, benefiting Streamers and YouTubers alike. Notwithstanding, RTX 2060 is capable of providing 100+ FPS on games like CS: GO and DOTA 2. That’s a small number, believe me. The card was tested on almost all recent AAA titles, and it’s worth mentioning that on 1080P it surpassed the mediocre refresh rate, resulting in 60+ FPS generation without flickering and tearing.

Moreover, the effective speed noted was around +48% which means that the GPU loads faster than most of the existing GPU models. For speed rank, it took the 34th spot out of 639. On software like lighting and MRender and Gravity. It gave around 66 to 90 % boost which is exceptionally high. Not to mention, you also get around an extra 65% boost if overclocked. This is only possible if you root for RTX Nvidia 2060.

AMD is known for providing budget-friendly cards, and RX 580 is one of them. Surprisingly, AMD RX 580 is cheaper than GTX 1060 and still outperforms it. It’s because AMD manufactures and designs cards that are as par the modern requirement. The Polaris architecture which AMD Rx 580 uses performs neck-to-neck with GTX 1060. It’s quite an oddity to compare RX 580 with Nvidia RTX 2060, regardless people did it to find out the major differences between the two products.

The overclocking mode which entails turbo frequency helps in gaming and rendering purposes. AMD contains GCN 4.0 card, which is the sole reason that the card outperforms many flagship products in the market. When you compare the gaming performance of RX 580, it’s run-of-the-mill in a sense that it was perfectly doing okay in previous-generation games, but as the gaming industry is advancing, the card has minor chances to even have a relaxing FPS generation anymore.

The data suggests that, on 1080p, it gave around 62 FPs to 70 FPS on Final Fantasy XV, Apex Legends, and shadow of the tomb raider which is quite fascinating. But, the same consistency to remain in the future is just a fallacy.

Games like Black ops 4, Fallout 4, and battle V game around 70+ FPS generation of 1440P, which is impressive. Well, this specific card is best for rendering if not gaming. So, if you are into software like Blender and Adobe, then using RX 580 could be your best shot.

AMD Rx 580 stands on the 57th percentile of all the cards in the market. It’s quite reasonable to be on the lower tier because the card was released in 2017. There was the constant generation of FPS on most of the AAA titles in 2018 and 2019. The effective speed calculated stayed on the 100th percentile (lower than Nvidia RTX which was 148%). It’s because the card uses old architecture.

Surprisingly, the Value and sentiment session was more skewed towards RX 580, than to RTX 2060. It’s because people are in love with this budget-friendly RX 580 card.

Which card to root for?

It always depends on your taste buds. If you are an AMD fan and want to continue with the series then sure go ahead with it, but if you are looking forward to rendering at all high time speed with proper processing units, then Nvidia RTX 2060 is your shot. Believe me, the RTX series is phenomenal and worth looking at if you are submerging yourself in the latest gaming titles.

You will be able to fulfill all your desires by simply having the card in the first place. Imagine playing RTX Minecraft with shaders. It’s just realistic and mind-blowing.

It’s undisputable to even question the reliability of Nvidia RTX 2060. Just go ahead with it. You will be loving every inch of it.

In terms of rendering, OpenCL otherwise if you are looking for gaming intense sessions, then CUDA all the way long.

These games were tested on a plethora of systems, especially on the core i7 9th generation. The results vary from system to system. So, in short, the benchmark results are based on average findings.

RTX 2060 is more powerful than RX 580 because of the new technology of ray tracing. If you want to experience real-time pixelated graphics, then Nvidia is just for you.

Why are we comparing video cards of different generations and price points? The rx 500 series is a year and a half older than the rtx 2000 series while the rx 5000 series is less than 1 year older than it. The 5700 xt is a more fair comparison of price and age. Or at a lower price point but more equal footing the 5600 xt.

Apologies. Well, this whole site is based on the core concept of fulfilling the needs of our old and new readers. People still search for the term “Nvidia RTX 2060 vs AMD RX 580”, and that’s why there’s a dedicated article about such a specific keyword on our site. I mean, no one is forced to go through the article, unless they want to. You can simply gloss over it 🙂

Edit 1: yes, i agree with you. The performance difference between the GPUs is humungous, but at times, RX 580 can easily knock off cards like 1060, and 1070 without any issues. But again, to each to their own.