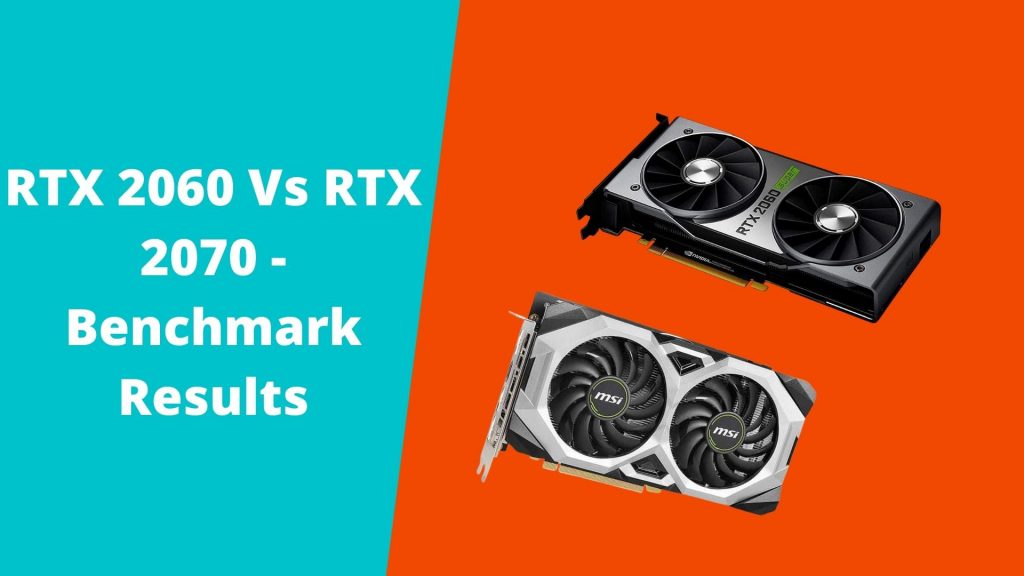 Nvidia’s revolutionizing the concept of GPUs by taking the development a notch further. The advent of the RTX series has created opportunities for gamers, developers, and renderers alike. Since Nvidia has brought into role-play the Ray-Tracing technology, the use of yellow-light projectiles to render real-time graphics is at an all-time high. What piques our interest is how can such a smidgen of change cause chaos in the markets. For now, we will be directing ourselves to the core concept of the article, where we will discuss two legendary RTX titles.

RTX 2060 precedes RTX 2070 in terms of performance charts, but it might turn out to be another way round in terms of release dates. RTX 2070 Super was released in 2018, where RTX 2060 came into existence in the early 2019’s. The apparent gap is minimal, but it does speak volumes. When you are considering the rivalry between RTX 2060 and RTX 2070, what you have to seek inside is nothing but durability, robustness, and functionality. There’s always a difference or two you stumble upon while investigating; hence, this is the case between RTX 2070 and RTX 2060.

What are the apparent differences between RTX 2070 and RTX 2060?

There’s nothing hidden about the implanted features of both the cards. The Nvidia 20-series has taken a toll on most of the AMD cards, and it’s humongous. When inciting competition between the two known cards from the same category, then it becomes quite hard to come to a definite conclusion. Well, RTX 2060 and 2070 is a watered-down version of the TU106 with multiple cores unlocked. Both the cards use “Turing architecture”, leaving little to no space for discernable differences. But don’t you fret. We have brought you an insight into the systematic properties of both the cards.

The only difference you get is of the performance because of the variable inception of CUDA cores. RTX 2060 uses around 1920 CUDA cores, 240 Tensor Cores, and 30 RT cores. Whereas, 2070 makes use of 2304 CUDA cores, 288 Tensor Cores, and 36 RT cores. If you have the basic knowledge of the functionality of processors in GPUs, then the difference is enormous. These CUDA cores help in processing all the complex mathematical and graphical calculations in no time. If the core density is less, you get the desired feedback from the GPU in more time. Here, the paramount differential equation formed is all about getting those CUDA cores in hand.

Having that said, it’s crystal-clear that RTX 2070 has the upper hand when compared to RTX 2060, regardless of the release dates; they don’t define the performance of the GPU.

RTX 2060 invites budget-friendly gamers to have a sneak peek into the realm of the RTX series more observantly since it costs around $350. It’s worth adding that the prices are plummeting down because of the SUPER variant making its appearance in the market lately. Well, RTX 2060 enables enthusiasts to juice out potential mounting features of the card. Regardless of it being an entry-level card, it serves extravagantly in terms of aesthetics, design, and overclocking. When you compare the RTX 2060 with 1080ti or GTX 1060 6GB, the performance benchmark is humungous. We know the GTX series has blessed us with diversity. Still, due to marginal differences in the price tags (GTX 1060 costs around $254), RTX 2060 has proudly taken a toll on its predecessors for today’s required standards.

It is statistically proven that in RTX 2060 graphics cards, you get a boost of 2-3% of FPS generation. The findings are only evident when you compare the thresholds with GTX 1070/1060. But what about RTX 2070? It’s for sure, RTX 2070 has superseded RTX 2060 in so many ways. We’ll discuss this in the later sections of the article. For now, we’ll stick with ourselves with 2060, and its drop-dead gorgeous features.

Additionally, the use of Turing architecture helps the card enhance the AI inlet of the card. The architecture produces a plethora of significantly noticeable changes in gaming and rendering. Also, GDDR6 memory plays a vital role in simultaneous processes to take place without crashing your CPU. Not to mention, the use of NVENC helps in efficient CPU encoding and alleviates the base performance of the card by descent percentages.

Moreover, users reported gaining 100+ EFps in almost all of the recent AAA titles. Nvidia ensures that you play on 4k settings without causing any stutters and freezing. Even the confidence levels generated from the card were around 95%, which means that the findings were accurate with a low error margin. It’s also worth mentioning that most of the games for benchmarking were tested on similar system rigs to eliminate all possible biases and faults.

RTX 2060 took the rank position of 34th from 639 active cards, which makes it in the top 50 cards. As far as the FPS generation of the card is concerned, the card produced 245 EFps on CSGO, 96 EFps on GTA V, 117 EFps on PUBG. The recorded data is subject to change with the system requirements you have. Not to mention, the results were benchmarked on a plethora of decent gaming rigs, and the average was calculated. When you are comparing RTX 2060 with RTX 2070, the card failed to register as many FPS as RTX 2070 did. Most of the time, RTX 2070 was on the lead with 90% confidence levels.

The only place where RTX 2060 conquered 2070 was in price tags. Although, the performance charts of both the cards doesn’t greatly vary, RTX 2060 costs way lower than its rival. The difference is around 250$ depending on the variant chosen. If you think marginal differences don’t matter for you, and what matters most is the budget, then RTX 2060 it is.

The latest card in the RTX series is 2080 Unfortunately, not everyone can piece together pennies to buy the behemoth RTX 2080. At least, 2070 falls within the mid-upper layer for budget users. Well, RTX 2070 will cost you around $600, which is significantly higher than RTX 2060. Why is it so? The reason for RTX 2070 being pricier than 2060, is nothing but enhanced performance. The results are apparent when RTX 2070 is overclocked to its extreme levels. You get to behold around a 20% boost in all the clock speeds; thus, making it superior to RTX 2060.

It’s worth mentioning that AMD RX 5700 XT which costs around $400, is nowhere equivalent to RTX 2070. Nvidia is at it again, making top-notch quality products for enthusiast gamers. It was recorded that on 1440p, RTX 2070 proportionally played better than most of the active cards. On games like Anthem, Shadow of the Tomb Raider, Final Fantasy XV, Gears of War 5, Need for speed: Heat, the card lodged in variable frame rate per second in the range of 63 to 69. Well, titles like Assassins Creed Odyssey and Origins, the game produced around 60+ FPS which was quite a thing to notice. On older titles like Forza Horizon 4, the FPS hovered in the mid 60’s range.

Surprisingly, RTX 2070 makes use of NVENC, which makes the CPU encoding faster, and alleviates rendering processes by two folds. It was also recorded, on RTX Minecraft, the card comparatively performed well in projecting yellow-light objects because of the increased CUDA cores density. Statistically speaking, on different systems, RTX 2070 performed 6% more than RTX 2060.

The average benchmark for RTX 2070 is 106%, which is significantly larger than the RTX 2060. Well, the card took the 15th position from 639 active cards, making it stay in the top 15 best cards at the moment. Even the effective speed calculated was estimated to be 25% larger than RTX 2060. It’s nearly a quarter more. For gamers, every percentage matters. It’s no doubt that RTX 2070 is superseding most of the flagship cards. Not to mention, on games like CSGO, GTA 5, Overwatch, Fortnite, the recorded EFps were 262, 114, 143, 158 respectively. The findings were again with 95% confidence levels. Here, the analogy between RTX 2060 Vs RTX 2070 was paramount. The FPS generation was significantly higher (around 17%) when compared to RTX 2060. Even the average score of the card stood at 126%. It merely means that the card is outperforming (exceeding beyond 100% range) to satiate the gaming enthusiasts.

Taking rendering into consideration, RTX 2070 was around 12% better than RTX 2060 in terms of reflection, parallax, and splatting. In blender software, the cycles produced by RTX 2070 were humongous and worth noticing. The card skyrocketed most of the processes; thus, bringing down the time required to render an image.

After reading the analogy between 2060 and 2070, you must have educated yourself regarding the hierarchy model. There’s not much difference to see between these two rival cards (expected to reach up to 30%), but since you are here, it does mean every single FPS matters to you. If you are looking to forward to having phenomenal and breathtaking gaming performance, then RTX 2070 might be your shot. It’s the only card that you can rely on for the years to come. It’s 2-3 years proof, which means you will not be upgrading to up-coming series soon. Well, it’s a good thing, to be honest. On the contrary, if you want to save a few bucks for yourself, then RTX 2060 is your resort as it’s cheaper and gives around the same performance.

No doubt, RTX 2070 leads the way. But you know what, the performance charts narrow down when most of the latest cards are put into comparison (RTX 2060, GTX 1080Ti, etc.). The performance boost is significant and discernable, but the price tags, they simply skyrocket. Although RTX 2060 is 30% lowered in terms of FPS generation, the difference in price between the two cards is around $250, which is again so huge.

Well, yes, sort of it is. When you put this card against RTX 2080Ti or SUPER, the RTX 2070 looks like a kid. Nvidia is playing marketing tactics, and you don’t have to give yourself in. It’s true that by using RTX 2070, you can save yourself from the struggle of upgrading for at least 2-3 years.

Not really. The card is a high mid-end GPU where you can play games at 1440P without any stutters or freezes.