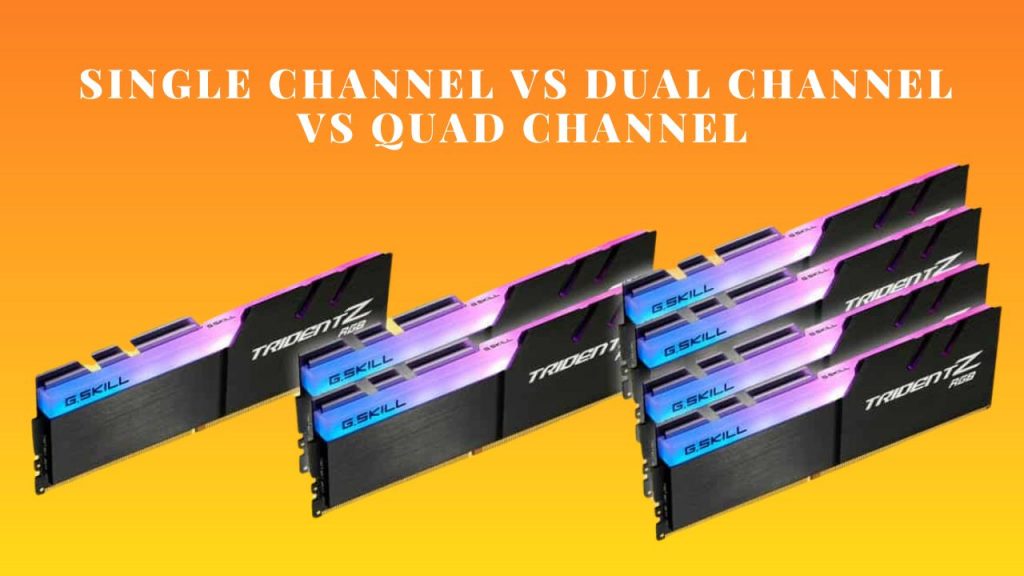 If you are a beginner at building a PC, these terms might confuse you; if not, you might wonder which one is better for you. First, let us start with a brief explanation of these three channels then we will get into which one is better.

A RAM arrangement with only one RAM stick is called single-channel RAM. You can insert only one ram in a Single Channel Ram slot. Multi-channel Memory always supports single-channel memory, which is why it is so familiar yet popular.

A RAM arrangement with two RAM sticks is called dual-channel memory. With Dual Channel RAM, you can speed up data transfers between the CPU and memory of your computer by using two RAM channels. Dual-channel RAM allows two RAM sticks to interact concurrently on independent channels, considerably speeding up computer operation and program execution.

A RAM arrangement with four RAM sticks is called quad-channel RAM. Quad-channel RAM can offer performance gain as there will be 4 RAM slots in your motherboard.

Which One Is Better?

Now, let’s discuss the most crucial information you should be aware of before purchasing any RAM. It would help to determine how many channels your motherboard or computer system supports before purchasing your RAM.
Checking the manual or visiting the manufacturer’s website are the simplest ways to learn how many channels your motherboard or system supports. However, suppose you don’t have the manual or are unsure about the model of your system or motherboard. In that case, you can typically figure it out by looking at the labels on the motherboard or by examining the memory slots’ color coding.

Let’s now discuss a memory kit. A memory kit is a collection of separate RAM sticks that have been verified to function perfectly in the number of channel operations it is rated for.
Therefore, let’s discuss a quad-channel kit. A Quad Channel Kit could be reduced to a tripe channel kit by removing one stick or a dual-channel kit by removing two sticks; as all sticks are validated to work with each other, there would not be an issue.
Usually, you could take a Qual-Channel Kit and put all four sticks in a Dual-Channel motherboard, which might function in Dual-Channel with full performance. However, we advise against doing so.
Purchase a Dual-Channel kit if you want to run in Dual-Channel, and a Quad-Channel kit if you’re going to run in Quad-Channel. Don’t buy two Dual-Channel Kits since they might work, but they might cause stability problems and in result they would not be able to perform their best.

Which one to buy?