How Much Does RAM Affect Gaming? 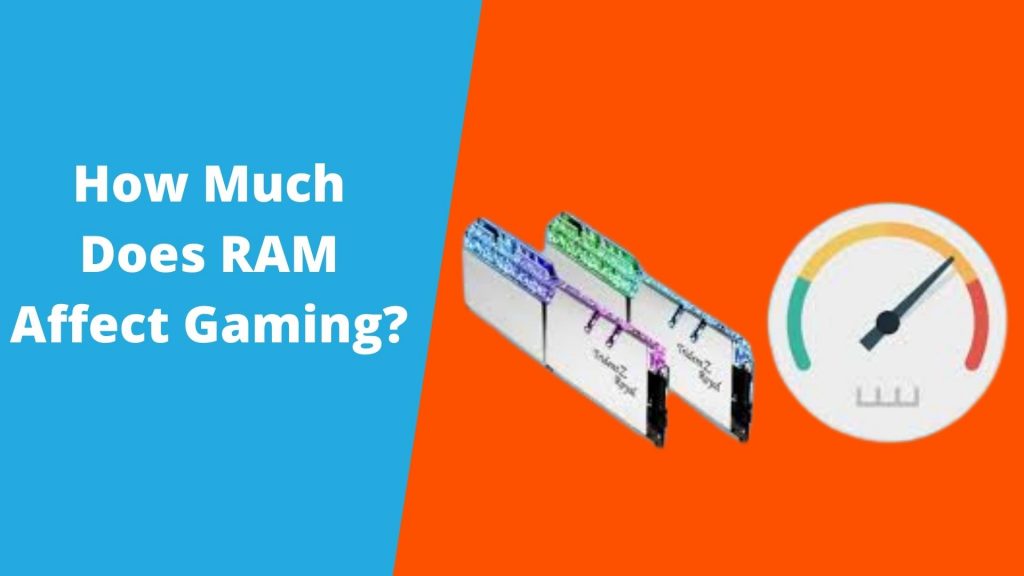 RAM plays a very useful role in any computer’s performance. You also have the advantage that you can easily replace and upgrade it, and it does not cost you that much. It is a component inside any computer without which the computer cannot run. Below we will discuss the role of RAM in any computer that is used for gaming. We will try to find out How Much Does RAM Affect Gaming?

When it comes to the effect of RAM on gaming, it is a stranger and frustrating beast. More or less RAM within any system affects its performance and increases or decreases its performance within the gaming experience. Therefore, increasing or decreasing the RAM in gaming has a huge impact.

So, the only and easiest way to get the best performance is to increase the RAM inside your PC. You have to make sure that even with the maximum amount of RAM you get, you reach a point where if more RAM is added, it becomes unused and has no effect on performance.

Factors that Dictate the Performance of Games

When installing RAM inside any PC, two factors dictate how high this limit is and how it can fluctuate.

In today’s modern gaming landscape, between 8gp and 16GB, RAM is usually more than enough to make most games run smoothly. The modern age is going on, and with the games becoming more in demand by 2022. As many developers as there are increasing the performance using more and more RAM. Therefore, considering all these factors, the minimum recommended RAM amount found in gaming PCs will continue to increase.

So 16 GB of RAM is still a sweet spot for a great gaming experience that can be agreed upon. There is no denying that you will never get out of RAM when you are experimenting with gaming, which is proof of the future. So within this time, 8 GB RAM is still considered an excellent RAM and a viable alternative of high budget. When it comes to 8 GB RAM, you can often get into trouble while playing various heavy games.

When it comes to RAM alone, many standards have been added, which formally indicate that simply adding RAM to it does not increase the game’s performance. However, in this case, many people think of asking some impersonal questions. And their question may be whether or not the maximum RAM can increase the FPS, and the question may not be correct.

There are different types of games globally, and each type of game requires a certain amount of RAM and memory. No matter how many games there are, some require a lot of memory, while others may not. RAM’s role is not only to play the game but also depends a lot on the settings you like to play your game. There are two types of factors involved in playing a game based on settings.

If you like to play a game on high settings, which is your favorite, you will need more RAM. But if you play the same game on low settings, it is possible that you do not need more RAM, and the possible RAM you have inside it gives you the best performance. So, in the end, it will be said that if you increase the RAM, it will definitely increase your gaming performance and also increase the FPS.

Does Faster RAM is Equal to More FPS?

It’s just like adding more RAM within certain limits increases your FPS, just as speeding up can increase your performance in some cases. So you also get to see different types of RAM. It includes lower clock speeds and higher clock speeds.

Consequently, if you are thoughtful of buying a RAM with higher clock speeds, it may be a bit more expensive for you. But the answer is something like this: if you are thinking of installing faster and more RAM, it may be equivalent to more FPS.

What’s the difference Does More RAM Make in Gaming?

It has been mentioned again that when you upgrade RAM 4 GB to 16 GB, running a game that uses a maximum of 8GB RAM has a small but significant effect. After doing this upgrade system, you can get the best benefits of different types. Thus, a game that runs on an 8gp ram will be very useful in providing excellent and brilliant performance.

As well as getting the best performance, you can also see the extra FPS inside it, which in turn gives you a slightly better performance as it reduces the load on your PC. On the other hand, if you upgrade your 8GB RAM to 16GB while the game you want to run also runs on 8GB, the difference will be noticed with the naked eye.

Furthermore, if you prefer RAM for gaming, then you must prefer CPU or GPU to get the powerful and best performance. When you are gaming, what game are you playing, and what software are you using for it? It can’t be ignored.

Improvements depend on the software you are using and the RAM capacity, and the previous RAM speed. When it comes to their clock speeds, this means it can take some action in seconds so that RAM can handle data faster. However, when I talk about it, the performance difference is not noticeable or will hardly be obvious.

So, in the end, it will be said that whenever it comes to RAM, RAM provides the best performance in gaming, and GPU plays a very important role.

The Most Important Factors for FPS in Gaming

You get to see the RAM inside a motherboard and a VRAM, which can be said to be the best way to show the video in the best quality. You are given the ability to store graphics data within a fast format of this VRAM flash memory. Just as the RAM installed in a regular system plays an important role in running heavy games, VRAM is also helpful.

Consequently, even if you see a slight increase in VRAM capability, your performance while playing heavy games can be significantly improved. Let’s talk more about VRAM, especially since it plays an important role in high-resolution displays like QHD and UHD. VRAM and RAM work together to provide the best performance. This VRAM memory is ideally 6GB and 8GB inside the GPU of any motherboard.

Hence, it will be very important to increase your performance, but you will not have to think about how fast this GPU or better. So along with RAM, you can never ignore the GPU.

Therefore, it can be said that RAM has a profound effect on performance within gaming. However, the extent to which we can influence it can vary from game to game and scenario to scenario. But you also need to make sure that your motherboard and GPU can support it if you are using more RAM. Performance varies, but if you use more RAM and play the game at higher settings, it also helps you provide amazing performance. It also helps you get FPS if you use more RAM and play the game on higher settings. How Much Does RAM Affect Gaming? In the end, the answer is that it is much more effective.