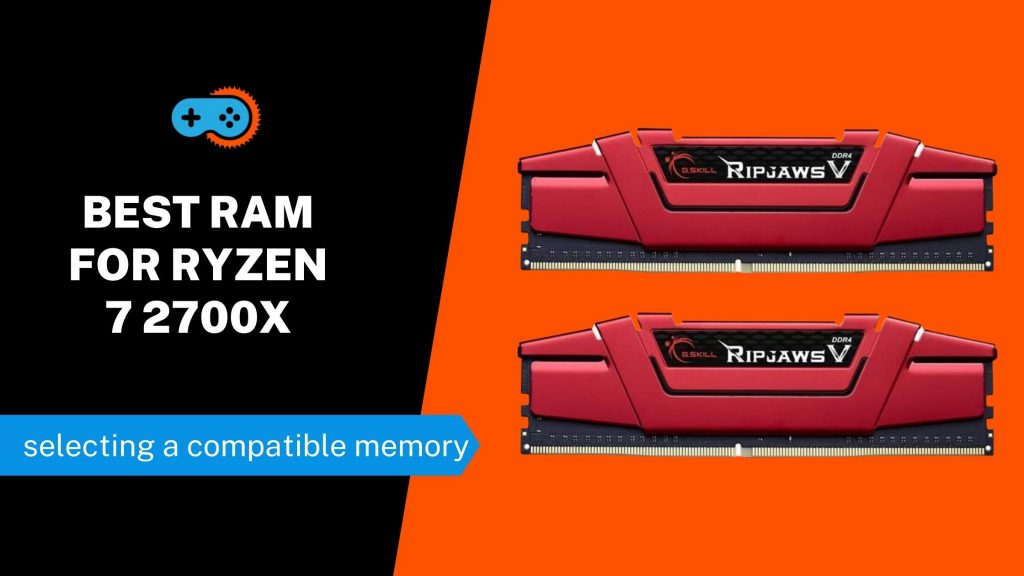 Do not cheap out on RAMs, or be sloppy when selecting a compatible memory for your Ryzen 2700x. Before we proceed, let me acknowledge a couple of intricacies. We all know how setting up an optimal, and decent working setup can take years if you are not well-versed in the respective research field. It’s also worth noting that random access memory plays a pivotal role in optimizing your system. Let me give you an example! When solving this RAM puzzle, let’s consider a box. Say, you are going to a picnic with a box in your hands, in which all the refreshments and mouth-watering stuff lie. Here, the real question arises, how much can you carry? It all depends on the width and height and volume of the box. Similarly, when you are playing AAA titles, you need to get hands-on the best RAM for Ryzen 7 2700x (the targeted processor). You will be able to store a voluminous amount of data temporarily.

Consequently, the system’s performance will skyrocket, as there will be more storage for the processor to use as a buffer. On the contrary, when a person cheap out on RAM, it merely indicates that his/her processor will be having room problems (read: storage). It becomes a compulsion to get hold of a decent functional memory to sustain all your willful desires and yearnings.

It’s time to enumerate all the possible RAM modules for your Ryzen processor. Without further ado, let’s begin the product review of the Best RAMs for Ryzen 7 2700x.

I guess there’s no need to explain why G. SKILL is taking the lead in terms of producing high-quality RAM modules, especially for AMD. Well, the G. SKILL Flare X series has a frequency base clock of 3200MHz, and low latency of 14ms. That’s truly incredible! Imagine having a fantastic memory module at a reasonable price. Not to mention, the Flare X series is compatible with the majority of the AMD processors, so in short, in the future, if you are looking forward to upgrading, the G. SKILL Flare X series can come in handy. For the capacity, you must hold 2x 8GB modules (run them on dual channel) for peak performance. It’s worth mentioning that these RAMs are handsomely laid out, with no LEDs (yeah, it’s mediocre). Let me remind you; looks aren’t everything; the module’s capabilities matter the most!

How can we forget Corsair? The name has been circulating in the market for years. If you ask me about the quality of Corsair RAMs, I would say it’s out-of-this-world. The only thing which repels away potential customers is the price tag. Usually, Corsair charges you comparatively higher than other brands. Regardless, you can trade off money for performance, if overclocking is your aim. For the specifications, Corsair Vengeance RGB pro offers an exceptional quality silicon body, a clock speed of 2933MHz, low latency, and syncing RGB LEDs. Not to mention, the RAM inculcates heatsinks that dissipate heat; thus, lowering the temperature.

Brands usually pick up a name, which, preferably, connotes their motives and intentions. For instance, Kingston HyperX Fury products are generally pleasant and performative. To be honest, it’s a versatile Ram at a reasonable price but lacks today’s clock speed standards. It comes with a maximum boosted clock speed of 2666 MHz and a base frequency of 2400MHz. Other than this, you get to hold up to 64GB of RAM in a single module (which is outstanding). Not to mention, it’s a must RAM for those people who are looking forward to having home-based gaming setups. It’s worth noting that the module has no dedicated LEDs or RGB, so yeah, the RAM lacks aesthetics.

It’s time to celebrate the appearance of Corsair Vengeance LPX, which falls in the higher hierarchy of the Vengeance series. Vengeance LPX is the ticket to heaven, precisely speaking. It’s available with a clock speed of 3200MHz. Surprisingly, you can still push the limits and go up to as much as 4000MHz-truly breath-taking. For benchmarks, many users reported that the RAM outperformed many of the rivals, hence climbing the ladder to success.

On top of that, the heatsink makes sure the heat is radiated out of the RAM slots at ease. Not to mention, the module lacks proper RGB lightning, but it’s still a go-to RAM module if you prefer performance more than anything. Additionally, the module offers low CAS latency and compatibility with a surfeit of motherboards.

Yes, It’s the second time that G. SKILL is making its appearance on the list of Best Ram for Ryzen 7 2700x. It’s completely understandable because many other brands (Except, Corsair), are unable to provide top-notch and reasonable performance charts. For the features, you get hold of 16GB module RAM at a decent cost of under $100, memory base clock speed of 2133MHz, boost clock speed of 4000MHz, and the capabilities of overclocking to the maximum possible potential of the module. Not to mention, you can choose between five different head spreader colors: Red, Black, Silver, grey, and blue. Since the module makes sure that performance stays at the top, with all the possible aesthetics, you better give it a shot. Indeed, a fair deal!

It’s the last product in our list of Best Ram for Ryzen 7 2700x, and that too taken by the G. SKILL, fair enough! For the TridentZ variant, it’s all about getting aesthetics and mesmerizing dancing colors in your case. It’s an excellent option for your Ryzen 2700x since it offers a base clock memory of 2400MHz, which can go all the way up to 4600MHz. That’s quite fascinating, isn’t it? On top of that, you get to choose between RGB profiles. Simply use third-party software or BIOS to tweak the patterns and modes as per your will. Other than that, the module offers a lower CAS latency timing, which is generally praised among gaming enthusiasts. It’s between 14 and 16ms. That’s a good shot. All in all, it’s a decent RAM that can power your AMD Ryzen 7 2700x quite easily.

There’s not much to comment on RAM modules, because they are tiny cute little boxes. But yeah, there’s a thing you need to engrave. It’s a crosslinking performance. It does not matter much, but for a gamer who strives hard only to juice out, every last drop of performance from the component will argue about it. The concept might be intimidating, but in reality, it’s nothing but how an X RAM performs on your computer as compared to someone else’s. For this, you can check up on past anecdotes of people and then cross-compare it with the performance produced on your computer.

For recommendation, I would say you can go for the G. SKILL Flare X series since they are the best you can get hold of in 2021. Otherwise, Corsair Vengeance RGB Pro can come in handy if the price factor isn’t an issue.

I hope the guide must have cleared your doubts, but if something is bugging you or missed out, do let us know in the comments. We’ll be much obliged to help you out!


What should you look at in RAM?

When cherry-picking RAM, you need to consider these crucial determining factors!

In general, Ryzen processors support RAM up to 2933MHz, so you can easily achieve this fixed value. But what about overclocking? Yes, for AMD processors, the targeted overclocked frequency is set at 3200MHz. So, as long as you remain within the threshold prescribed by the manufacturers, you are in safe hands.

To be on the safe side, what you can do is look into the QVL of your motherboard to get more details about what sort of RAM it can house in. There’s this big list of RAMS that an X motherboard can sit in depending on the brand. Don’t worry, if your RAM is not listed on the QVL. The list only shows the tested modules, so in short, the version of the RAM you have wasn’t tested on the motherboard. That’s all! No need to fret about it.

Additionally, when considering the AMD Ryzen 7 2700X processor’s optimal CAS latency, it’s said to be CL-14. If you can get your hands on a memory module of 3200MHz, and a CL-14, then well and good.

There’s no concrete answer to it. You can slot in 128GB or whatever the amount you want to. It all depends on what you are working on. For example, people who are into rendering, coding, and gaming simultaneously need more RAM than the people who are just gaming.

Yes, it does. You can slot in an overclocked RAM of 4000MHz, and it will still work flawlessly. Don’t worry about it; play it cool. But do remember, your motherboard should be capable enough to let the overclocked modules function efficiently.

Yes, why not? To be honest, there’s a zero correlation between the base frequency of a RAM, and the processor. The Ryzen 7 2700x can easily run on the afore-mentioned frequency, so don’t worry 🙂