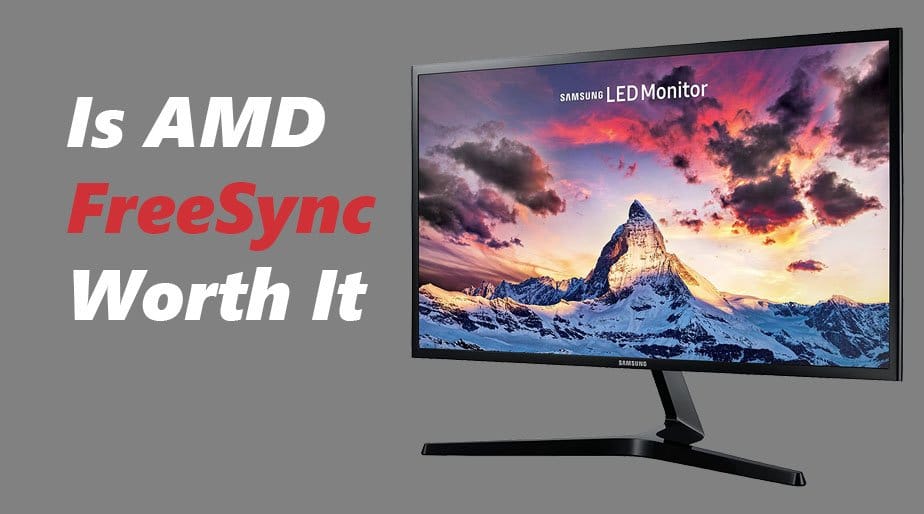 If you are new to the world of gaming, you may never have heard of any terms such as Freesync, G-Sync, tearing, and screen stuttering. To give you a clear picture of ‘Is Freesync worth it?’, we need to find the answers to the above-mentioned terms first.

Freesync, in essence, allows the refresh rate of the monitor of your PC to be in sync with the computer’s GPU and the rate at which it’s producing the frames. It will lead to smoother gameplay as there will be no lag or lead in the production of frames and their subsequent visualization on the PC monitor.

Let us now look into the phenomenon’s that make having Freesync a necessity.

When you ask the question ‘Is Freesync worth it?’, you need to look at the problem that causes monitors of your PC to behave differently under different circumstances. The tearing of the screen can be attributed to the torn images produced on your monitor screens when the monitor cannot handle the speed at which the GPU is sending the frames the monitor’s way. These images produced by the GPU do not corroborate with the refresh frequency of the monitor. Hence the monitor cannot adequately display such images, and tearing occurs.

V-Sync and a Possible Solution to Tearing

A feature in V-Sync was primarily designed to curb the problem of tearing on screens. It was achieved by the capping of the GPU frame rate at a level compatible with that of the monitor’s refresh rate frequency. For example, if your monitor works at a frequency of 75 Hz, meaning its refresh rate is 75 times a second, and the GPU can produce images at a rate of 100FPS, then the V-Sync feature will limit the GPU’s performance and its frame production to 75FPS. It means that your GPU’s performance is limited and cannot cross the threshold rate assigned to, which should fundamentally solve the problem of tearing. The answer to this simple question is no, as we look at it in the next section.

As we discussed, the problem of screen tearing may be resolved if the GPU’s frame rate is adjusted to that of the monitor’s refresh rate. What happens when the GPU performance or the frame rate drops below the monitor’s refresh rate? There are certain instances during gaming, and gaming people will be familiar with that fact, where the gameplay gets demanding, and the GPU performance drops significantly.

Now the GPU may be producing frame rates well below the capability of the monitor; let’s say 40FPS, while the monitor can easily support up to 60FPS; a delay on the screen regarding the images produced by the GPU will be experienced. Now with V-sync on and the GPU frame production per second well below the monitor’s capacity, the monitor will be displaying things at a faster rate than they are produced. It will essentially lead to the lagging of the images, which appear as stuttering on the screen.

What is AMD’s Freesync?

Now that we have discussed the need for the monitor and your GPU to be in sync during operation, let’s look at the feature that makes it possible. The FreeSync technology purported by AMD is the latest in an attempt to solve the problems of stuttering and screen tearing when using high-performance GPUs. AMD is not the first company to introduce this solution, as its competitor NVIDIA, has its own version of syncing the two PC components via G-Sync. FreeSync, as discussed before, allows the monitor to be in sync with your GPU and displays the same frames per second as the GPU produces. The FreeSync compatible monitor will be able to display images without any lag or lead.

What are the requirements for using FreeSync?

The catch point with using FreeSync to resolve the problems of screen tearing and stuttering is that it will require an AMD graphics card. An integrated APU may also work that comes from AMD along with all the latest budget graphics cards or the more expensive ones such as the Radeon VII. If you are unsure which is compatible, check out the spec sheet for the graphics card.

To use FreeSync, you will probably need a VESA Adaptive-Sync compatible monitor as well. AMD started support for the FreeSync technology back in 2015 by launching its software suite. The primary purpose of the suite was to develop two-way communications enabling the AMD GPU to interact with the off-the-shelf scaler boards that were available on some Adaptive-Sync monitors.

The spec named DisplayPort 1.2a, which was introduced in 2014, provided variable refresh rates capabilities while support for HDMI 2.1 was later added on in 2017. AMD has assured its users that manufacturers have to comply with some serious regulations to be branded with the FreeSync moniker and to get the certification. AMD FreeSync can work over both HDMI and Displayport, depending on the type of monitor, a feature that is absent in G-Sync monitors.

Some FreeSync monitors also allow backlight strobing, which allows the users to increase on-screen clarity. FreeSync monitors achieve this feat by having a proprietary technology that enables motion blurring. Although a cheaper alternative to its rival G-Sync, it provides a host of other features that enhances the gameplay and experience of users assessing the graphical prowess of the AMD chips. These features include support for 4K resolutions, High Definition Resolution, and high refresh rates.

Enabling FreeSync on Your System

To enable FreeSync on your system, you need to install the updated AMD Catalyst drivers and make sure your monitor is FreeSync compatible. After installing the software, check your APU model from the list or select auto-detect if you’re not sure about the model. You don’t need to install any other drivers apart from this software as the drivers come included in this.

Restart your system after the software package installation and open the Radeon Settings tab by right-clicking on your home screen. After the pop-up menu opens, select display from the options and then toggle on the option ‘Radeon Freesync.’ The monitor you have with your system will govern if you need to enable the FreeSync settings at your monitor end as well.

During CES 2020, AMD introduced a new solution that carries on the groundwork being laid by FreeSync. Monitors that run on this specification must ensure a refresh rate of 120 HZ at the minimum on 1920 x 1080 resolutions. The monitors also should be able to support LFC (Low Framerate Compensation), which allows the refreshing of frames on the screen when the GPU output falls way below that of the display’s lowest frequency.

The FreeSync 2 HDR is the rebranded version of AMD’s top-tier FreeSync services. It translates to the top-of-the-line services provided by AMD to its users who can afford these at a premium rate. The rebranded took place at the CES 2020 event, where the company built upon its mid-tier services and re-enhanced them to include premium services such as the FreeSync 2 HDR. These premium monitors must be able to support HDR gaming based on HDR visuals.

These pro panels are sought to support low latency in dual ranges such as High Definition and Standard Definition modes. AMD also insists that the monitors must pass a stringent test that relates to the accuracy of luminance and extensive color gamut tests. These meticulous regulations regarding the luminance certification must be met for AMD to award a monitor the title of FreeSYnc 2 HDR.

An HDR 400 certification can only be achieved if the luminance certification is obtained, which produces 400 nits of brightness as guaranteed output. The future beckons for FreeSync premium monitors, and they’re the perfect choice for gamers who have one eye on future technologies. The only catch with such premium products is that they work only with HDR functionality and may not work besides those specifications.

The Tradeoff Between G-Sync and FreeSync

While asking yourself the question ‘is FreeSYnc worth it?’, it is essential to draw up a list of advantages and disadvantages the feature has over its nearest competitor. As elucidated before, the FreeSync is a feature developed by AMD; meanwhile, the G-Sync was developed by NVIDIA. Both companies share a line share of market pull, especially when it comes to captivating the minds of high-end graphic users. The FreeSync developed by AMD is a slightly cheaper version of the G-Sync, and people on a budget can considerably save some bucks by opting for FreeSync.

The main reason for the distinction between the two products’ prices is due to the nature of each product. AMD’s FreeSync is a software tweak on the existing adaptive sync standards; meanwhile, NVIDIA’s G-Sync provides a hardware solution. It increases the cost of the latter, while AMD’s technology can be used readily and on a budget. NVIDIA’s G-Sync relies on a module that is used in the monitors supporting the feature. The cost of this extra module is, however, borne by the end consumer and hence increases the price of NVIDIA’s technology.

Resultantly, the market is flushed with monitors that run on the FreeSync technology instead of the G-Sync moniker.

FreeSync is easier to use and implement and less expensive to set up as well. Comparing the prices of both setups reveal a considerable difference of around 150 USD, taking the basic G-Sync monitor and an excellent FreeSync monitor. It makes the FreeSync variants, a top seller in the market.

Just like any other item in the market or a tech product, FreeSync has some flaws as well. The highly competitive nature of the gaming world and the rivalry between the two giants, AMD and NVIDIA, make each company’s product incompatible with the other company’s. Hence, the FreeSync feature, which is an AMD trademark, can only be used with compatible graphics cards, i.e., AMD graphics cards. In this situation, the opposite is also applicable as NVIDIA graphics card users will not be able to run monitors that run on FreeSync and will have to break the bank for G-Sync capable monitors.

The other drawback of possessing a FreeSync monitor compared to a G-Sync one is that the former usually is less consistent. It means that the G-Sync variety adheres to a more stringent criterion than the FreeSync monitors resulting in an inconsistent and sometimes even unsatisfying experience. The reason this happens is due to the lax regulations on the FreeSync monitors as opposed to G-Sync, which ensures tighter controls to be sold as G-Sync compatible.

To answer the question at hand, ‘Is AMD FreeSync worth it?’, we can simply say yes. Why? Because FreeSync provides the syncing of your GPU and monitor’s refresh interval at a very affordable cost. The user only needs to do some added research to find out what frequencies they would like to be included in the range they want the FreeSync feature to work.

If you have an AMD GPU, then the FeeSync monitor would be worth it without any shadow of a doubt. If you possess an NVIDIA card, it is better to opt for a G-Sync monitor. Moreover, you will have to be a little astute to buy a FreeSync monitor that caters to your requirements.