How to Underclock GPU – Understanding the Complexities 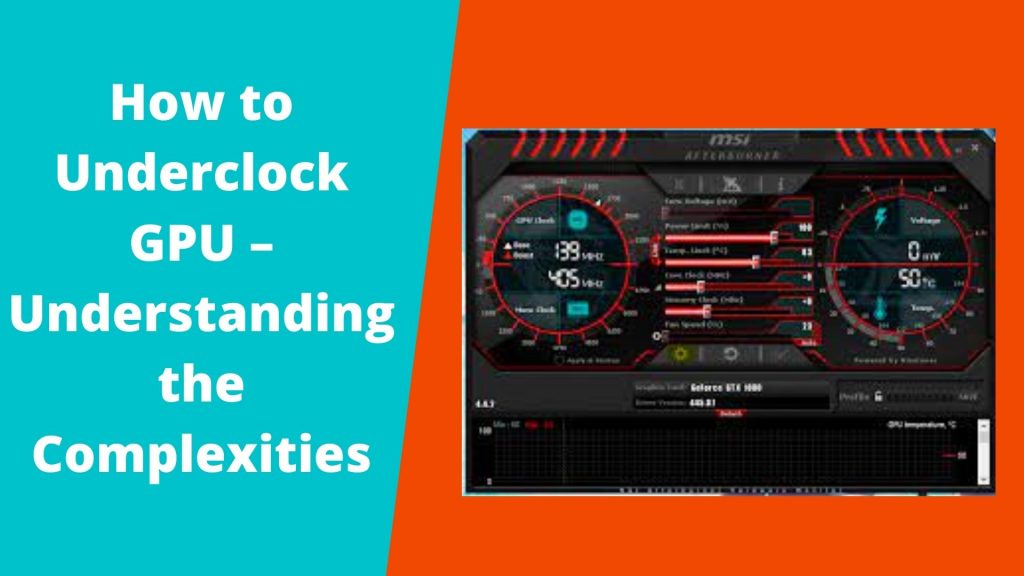 Have you ever found yourself in a situation where your GPU is not running properly because of the thermals or some other reasons that you cannot seem to explain? This happens a lot more commonly than one might imagine and to be honest, something as simple as underclocking can help you. When it comes to underclocking people are generally worried about it as there can be some risks associated with it, and the more you know about the process, the better it is.

Understanding underclocking is fairly easy, it is the opposite of overclocking with an aim towards achieving different results.

The results are going to vary depending on the issues you are having with your GPU. In some cases, it can be incredibly helpful, while in other cases, it can end up being a waste of time. For instance; you can underclock to reduce the generated heat, prolong the life of your GPU, increase the power efficiency of the GPU, and decrease the power consumption overall.

How to Underclock GPU Effectively and Safely

Since we are underclocking here, we will be running some routine tests and benchmarks that we do when we overclock a component. The main difference here is that you do not have to be as careful because there is not going to be a spike in the power consumption that can kill your GPU.

Preparing your system before underclocking is very important. This involves all the games and other benchmarking apps that you are going to use in order to achieve the results you want. It can be confusing but I have a list of apps/games you should download and you are good to go.

In addition to Furmark, I would also suggest that you are using a number of intensive games that can push the GPU to limits. The games that I normally use to run benchmarks are listed below for your convenience.

I am not saying that you have to go ahead and test out each of these games but you can install a few just so you have more ways of getting a baseline.

Establishing a baseline is the first step in any underclocking or overclocking process. This can be done through a very simple 15-minute run of Furmark. The purpose here is simple, you just need to check for the temperatures, base, and boost clock of your GPU to see what you are getting.

Why do you need that? Well, if you are about to underclock your GPU, you need to be sure that you are getting results that are better than what you were getting prior to the test. Once you have established the baseline, I would highly suggest that you write down the scores for a better understanding so we can move forward and get the testing process start.

If you are a gamer, I would highly suggest that aside from using Furmark, use a number of games that you regularly play and establish a baseline, too. We not only want to see how big the difference is but we also want to look for any anomalies after you are done underclocking. Considering how Furmark puts an unrealistic load on your GPU, it is better to throw in a few games in the mix, as well. Most games do have their own built-in benchmarks, so you can always use those and get the results you need.

Now that we are done establishing a baseline, the next step is to actually start underclocking the GPU. This one is not complicated at all but still, let’s have a look. You can start by opening MSI Afterburner and you will see a number of options there.

Look for the Core Clock slider and start taking the slider towards the left. I would suggest that you do it within the increments of 10 MHz and then see just how far you want to go. Like I have said previously, underclocking your GPU will not have a negative impact on the health of the GPU but it will surely have an impact on the performance.

Once you have the Core Clock set to the desired value, I would suggest that you hit apply to save your settings. There is some testing involved in the process but we are going to get to that later.

Once the Core Clock is handled, we are now going to move to the Memory Clock. It is worth noting that when you are handling a memory clock, you do not have to underclock or overclock it with smaller increments as the impact here is not as much, to begin with.

Still, start by moving the slider towards the left and I would say that you choose around 40 MHz of increments until you reach the frequency that you think is right for you.

Once you are done, simply hit Apply and move on to the next step.

The underclocking process is over for now so we are going back to the drawing board and seeing what can be fixed and what cannot be. Since we took the baseline using Furmark, I would suggest that you launch the app again and run it on the same settings as you did before.

Let the rest run for 15 minutes or so and make sure that you are noting down the power consumption, temperatures, and other scores. The goal here is to be sure that the result that you are getting is different from the score you got when you tested with stock configuration.

If you think that the score is good enough and the difference is there for you, this underclock can be saved. However, since Furmark is just a benchmarking tool, I would suggest that you run a number of games and test them as well. The purpose here is to see that the games are not behaving erratically because of the lowered clock and memory speeds. If they are working fine, compare the score with the scores you got in the 2nd step and see if the difference is significant enough for you.

Normally, you do not have to run back and make the tweaks again but in case your underclocking does not yield the results you thought you would get, you can go back to the previous step, make further tweaks, and then come back to this and repeat the process.

You have to save the underclock after you are done finding the right settings. This makes it easier in case you want to do more tinkering without losing the actual settings. Open MSI Afterburner and look for a small Window icon on the top right, click on that. This will ensure that the settings are applied every time you boot your computer. Alternatively, you can hit the save button as well and that should save your settings.

Is Underclocking the Same as Undervolting?

When you are surfing the internet trying to find guides to underclocking, you might run into a turn called “undervolting” as well. The term is used for CPUs, as well as GPUs, and RAM kits and a lot of people confuse it with underclocking. However, it is inherently different, even though it works in a similar way.

Undervolting simply is a process through which voltage to your processor, GPU, or RAM is decreased. In theory, it reduces the amount of current that your components require and sometimes, it is done to improve the power efficiency. However, severe undervolting can result in system crashes and other performance issues such as reduced performance.

I do understand that the term underclocking seems like something that would work really well because let’s be honest, you are getting the chance to run your GPU with lower temperatures, better efficiency, and could even result in a longer lifespan. However, the other side of underclocking is something that is not talked a lot about all the time and for the simplest reason that people do not pay much attention.

Sure, you can save your GPU from a failure by underclocking it but you have to ask yourself “do I really need to do that?” In my decades of experience with computer hardware of all sorts, I never really had to underclock a GPU because it was running into issues. I do remember the time when my GTX 1080 started generating more heat than it normally would and all I did was reapply the thermal paste and the GPU was off to the races.

Much like overclocking, underclocking is a process of trial and error; this means that you might need to revisit MSI Afterburner, Furmark, and other games that you are using for benchmarking again and again until you find the perfect spot. That is why, for a lot of people, there is little to no point in underclocking the GPU unless, of course, you are running into some issues that can only be solved by lowering the memory and core clocks.

For those wondering, underclocking is completely safe for your GPU. However, before you go ahead and do underclock your GPU, be sure that you have followed the guide properly.

You do not necessarily have to underclock your GPU because if your GPU is running just fine then there is no need to go ahead and lower the core clock or memory clock. You can, however, undervolt your GPU for better efficiency.