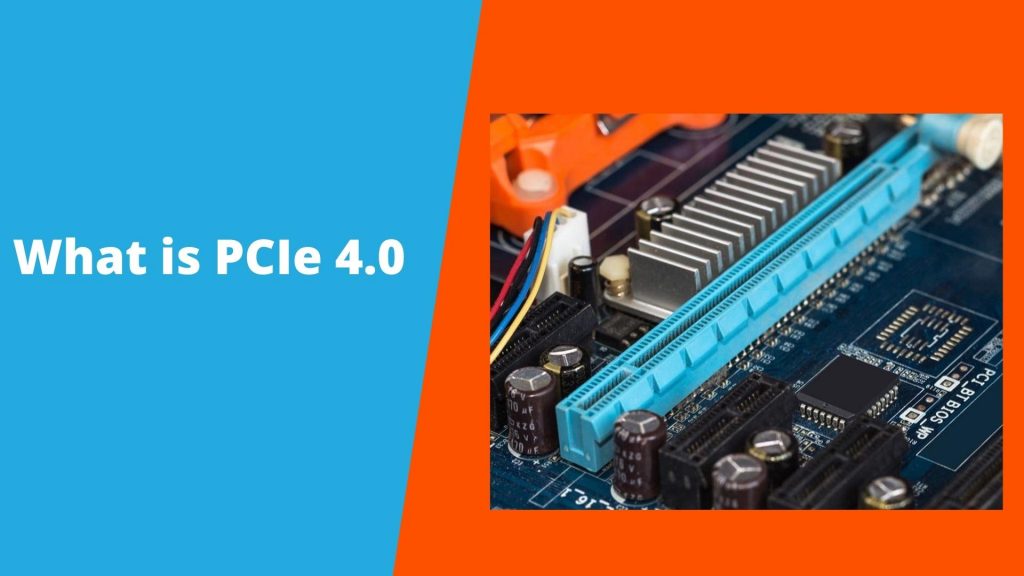 The acronym PCIe stands for peripheral component Interconnect Express and is a must for every motherboard. In particular, each motherboard has different types of PCIe slots, and it varies greatly depending on the lineage. For example, the previous generation motherboard housed PCIe 3.0 x 16 and PCIe 3.0 x 8 slots, but today it’s all about having PCIe 4.0 and, in particular, PCIe 5.0 in the near future. If you are asking, what is PCIe 4.0, or in general, its core function, then stay tuned. I’ll explain everything.

What is PCI-Express and its core function?

In retrospect, the PCI express is used for connecting additional GPUs, LAN ports, or NVMe SSDs.  Basically, these ports are there to expand on your components, be it a GPU or any type of hardware. It’s worth mentioning that this is only possible with the help of expansion cards, which are known as add-ons. You can find them from any hardware store.

For figures, the PCIe 2.0 and 3.0 were first released in 2007 and 2010, respectively, and now it’s the era of PCIe 4.0 and possibly 5.0. You also need to be aware of the fact that each PCIe port varies in length. For example, the smaller ones can be used to expand on hard drives, or NVMe SSDs, whereas the longer ones (probably x16) are used for slotting in additional GPUs. The configuration is as follows:

I surmise that with each incrementing value in the PCIe lineage, you get to experience double the bandwidth. And as far as PCIe 4.0 is concerned, it’s twice as fast as PCIe 3.0. For comparison, PCIe 4.0 has a 16GT/s data rate compared to the data rate of 8GT/s on PCIe 3.0. Not to mention, with the 16-lane slot configuration, the speed can shoot up to 32GB/s on PCIe 4.0. So yeah, that’s remarkable. However, do bear in mind that it can also touch 64Gb/s if it’s bidirectional. For specifics, it’s nothing but the ability of the lane to converse subsequently TO and FRO. It’s worth mentioning that the motherboard is the main decisive element since the PCIe slots are integrated on MOBOs. So, like in the X570 motherboard, you get to bask in under the influence of PCIe 4.0, Whereas the older lineages make use of PCIe 3.0 and 2.0 (Not recommended in 2022).

Let me stress enough that the PCIe 4.0 is not restricted to Intel motherboards. You get the same slots on AMD Ryzen motherboards as well, so yeah, if you are a fan of AMD, you are covered. Don’t worry!

The concept of Backward and Forward compatibility (PCIe 4.0 and 3.0)

It’s a hot debate these days that you might not be able to run Ampere GPUs just because your motherboard has a supporting PCIe module of 3.0. Let me make this as crystal clear as possible that both the PCIe 3.0 and 4.0 are backward and forward compatible. In general, each lineage is. Basically, if your GPU has PCIe 4.0, you can use the GPU on PCIe 3.0. Yes, you read it correctly. Let me give you an example. The AMD RX 5700XT GPU and other latest variants support PCIe 4.0. But surprisingly, they were all functional on PCIe 3.0. This upholds the notion of backward and forward compatibility of PCIe for all configurations.

Do you know what’s surprising? The Nvidia’s latest RTX 30-series GPU was able to run flawlessly on a CPU (Intel i9-10900K) that lacks the support of PCIe 4.0. I believe these examples are enough to put you at ease.

It’s also worth adding that you can apply the same concept of any type of hardware. For example, Hard disks, SSDs, NVMe SSDs, or any internal component that relies on PCIe, in general. But do bear in mind that the cross-compatibility needs to be addressed properly. You really can’t use the x16 lanes SSD on an x4 lanes slot. Although, the inverse is possible.

Well, everything is just not about the performance ratio. You have to look at the bigger picture, and that is where your decisions slip in. Let me assure you that you won’t be experiencing any sort of performance degradation even if you slot a PCIe 4.0 card on the 3.0 expansion slot. There are examples on YouTube where people tested the performance; nevertheless, they were equal. For example, RTX 3070 and RTX 2080 Ti have a similar performance on the PCIe 3.0. This was only possible because of the GPU’s architecture and kudos to Nvidia for doing it.

Not to mention, everything is related to the input and output power. For example, if you are planning to play the most CPU/GPU demanding games, then the maximum required bandwidth might exceed the expectations of your PCIe 3.0. There’s 8K, and you might not be able to sustain a decent refresh rate with that PCIe 3.0. As I mentioned, a lot of factors affect the picture as a whole, and not a single element.

PCIe 4.0 SSD and GPU- How to take advantage of them?

It’s a very crucial aspect to keep in mind that you may experience diverse bottleneck issues on using the PCIe 4.0 component with the previous generation PCIe slot. For example, SSD bottleneck if you are using it on PCIe 3.0, whereas it is expected to run on PCIe 4.0. The same goes for GPUs as well! I believe we are moving toward further technological revolution because PCIe 4.0 and the coming PCIe 5.0 are more reliant on speed and bandwidth ratio. You need a high data transfer rate for a seamless gaming experience or any sort of professional work. The same applies to SSDs and GPUs. And to be honest, both the SSD and GPU are correlated. How? Well, the SSD provides your GPU with the data, and the GPU renders it. Let’s say you are playing a high-end game with that GPU, and the SSD is loading the data constantly into the RAM. Now imagine using the PCIe 4.0 GPU on the PCIe 4.0 slot, but not the SSD. That’s where you will experience adverse bottlenecks. So, if you are looking forward to exploiting the full potential of either of the components, you really need to use the right slots!

You don’t have to look for these as standalone slots. They come with your motherboard. All you have to do is make sure that the GPU or the SSD you are looking forward to has the right compatibility with the PCIe slot on the motherboard. Apart from this, you can buy the AMD B550 or 570 motherboards in order to use the PCIe 4.0. For the intel, Z490 motherboards are the best choice, but the only issue is that the 10th generation Intel processors lack PCIe 4.0 support.

It’s worth adding that there are a gazillion of choices waiting for you, especially when Intel Core 10th generation processors are concerned.  But do remember that AMD is way better than Intel in every way, especially when it comes to using the PCIe 4.0 extension with your GPUs. I would definitely recommend you to have an eye on AMD’s PCIe 4.0 because the motherboards are highly compatible and work like a charm.

Should you upgrade to PCIe 4.0?

I have mentioned before as well that the PCIe 4.0 is as twice as fast compared to the PCIe 3.0. For today’s standards, you do need the required speed to have a seamless gaming experience. But again, it doesn’t matter if you don’t have the budget at the moment. You can use the PCIe 3.0, and it’s completely okay.

It’s also worth mentioning that if you are only using the expansion slots, then there is no need to upgrade at all since you have been given the right bandwidth and speed already. And believe me, they are enough unless you are into developing games or an animator. Apart from this, you better question your motives because, at the end of the day, it’s you who will be using the PCI XYZ version and not me. So, the questions could be: Is your current PCIe express card ample enough to sustain the best gaming experience? Do the applications in your system need the required boost algorithm? Well, there can be hundreds of questions, and you need to ponder over them in the best possible manner; otherwise, blunders await you.