What is Backlight Bleed, and How to Fix it on Your LED LCD? 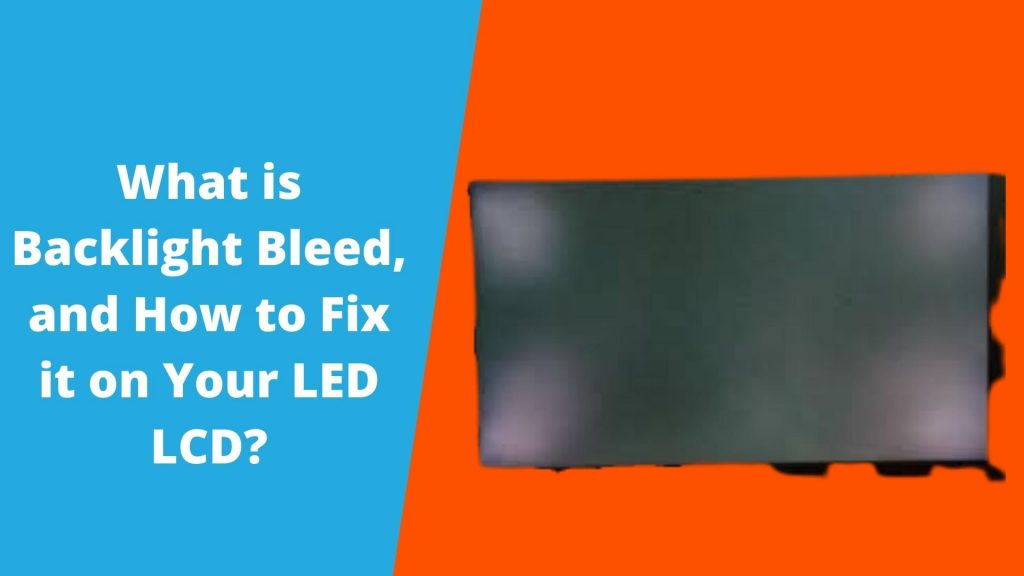 The two terms “backlight” and “bleed” entail endless visual problems on your LCD. Well, it happens because of the light leaking at the edges/corners of the LCD. It’s natural to experience backlight bleeding. The modern displays use a new technique of “Flash lightning,” which gives rise to the issue of light leakage. If you have ever come across annoying white patches of light on your screen, it’s the leakage that you are supposed to tend to.

Most of the modern displays have LEDs at their back. When the LEDs bounce back, the chances of having a concentrated white patch on the screen are minimal, but it becomes apparent at times. The color projection somehow worsens the situation. It’s also worth mentioning that the LCDs make use of the light blockage process, where the parts of the LCD are deliberately closeted to display the perfect image. Since the whole process is intricate, you might not be able to comprehend it properly.

In short, the LCD and sensors at the rear end are unable to block the light properly; thus, resulting in backlight bleeding. These days you can find bezel LCDs that try their level best to minimize the ensuing problem. Take note that you can’t fix the problem completely. It will stay with you forever, but yeah, there are ways to minimize it, and we’ll be discussing it.

How to fix the backlight bleeding?

Below-mentioned is a couple of things you can look into to solve the problem, otherwise RMA. That’s the best available option right now.

Without any further ado, let’s begin!

The most common workaround to get rid of blacklight bleeding is to unscrew the frame. Tight frames somehow produce a warped display. Use a portable screwdriver to lose all the bolts. Do remember that any overly exerted force can damage the LED. So, ensure that you take safety precautions before proceeding to fix the problem.

Another possible cause could be the non-flattened surface of the LED. It could be because of the accumulated dust and grease. For this, you need to get a microfiber cloth. Grab it and start rubbing the cloth against the bleeding area in a circular motion. Make sure the force exertion remains minimal. LED is prone to vandalism, and you don’t need to kill it because you involuntarily chocked it. Let the solution settle in for a couple of days. Even after a few days, you don’t see any visible changes, then you might need to repeat the process.

Backlight bleed could be because of the unhinged frame inside the LED. It happens when the display frame is displaced; hence, failing to block any extra light. What you can do is lose the bolts again. After the unscrew the bolts, try twisting the frame inside so it positions again. Keep repeating the process until the bleeding disappears. If not, then you may need to check the next workaround.

You may not notice, but the bleeding might have, to an extent, disappeared. What you can do is keep taking snapshots after each mentioned step to check for the differences. There’s another route to diagnose the bleeding problem. Keep reading the article, and you’ll know.

Well, the test enables you to spot all the white patches of light on the screen. If you are asking how to do the test, then use the given black screen below to diagnose the problem yourself. Unfortunately, if this doesn’t solve the issue, then there’s another workaround you may need to use for proper diagnostics.

At times, you most probably fail to do anything with the IPS backlight bleed. It’s not a professional workaround, but you can still savor your last moments with the LCD. What you have to do is decrease the brightness levels on the LCD. The procedure decreases the amount of light falling on the un-restricted parts of the screen; thus, reducing the backlight bleeding. Well, this is the ideal solution you can get hold of if everything fails.

What are the couple of other problems you might face in the IPS panel LCD?

How to avoid backlight bleeding in the future?

The issue is permanent as long as the system uses active backlight techniques for picture projection. The only way to avoid the problem is to invest a handsome amount in OLED displays that use organic sandwiching (cathode and anode) for display. It’s a reasonable option because OLEDs do not house such problems. It’s also true that OLEDs are expensive. You would need to save a lot of money before proceeding to the checkout.

There’s another way to solve the problem, and it’s the use of techniques in action for putting the backlight in minimal mode.

The findings might change your mind about buying LCDs in the future, but it’s not a big deal. Bleeding is a predominant problem in most LCDs and isn’t noticeable at all until you are light-sensitive. Getting CRTs and OLEDs might not be a feasible option because of the quality and price tag.

You can rely on the steps mentioned earlier to fix the problem. Not to mention, you can take pre-measures before buying the LCD. Get it appropriately diagnosed before spending any money on it; this will save you from the hassle of fixing the bleeding yourself.

Hopefully, the guide must have fixed your problem!

What questions do users ask?

Not really. You can try fixing the problem using the techniques provided by the experts. Although at times you might fail to address a probable solution, it’s worth trying.

You can identify the bleeding via bright spots on the screen. It happens due to the lost restriction of light at specific parts of the screen. If you trace any evidence for clouding (wide patches of white light), then yes, backlight bleeding is there.

A little backlight bleeding is normal at 100% brightness. You can’t change technology! This is how it works, so maybe live with it.