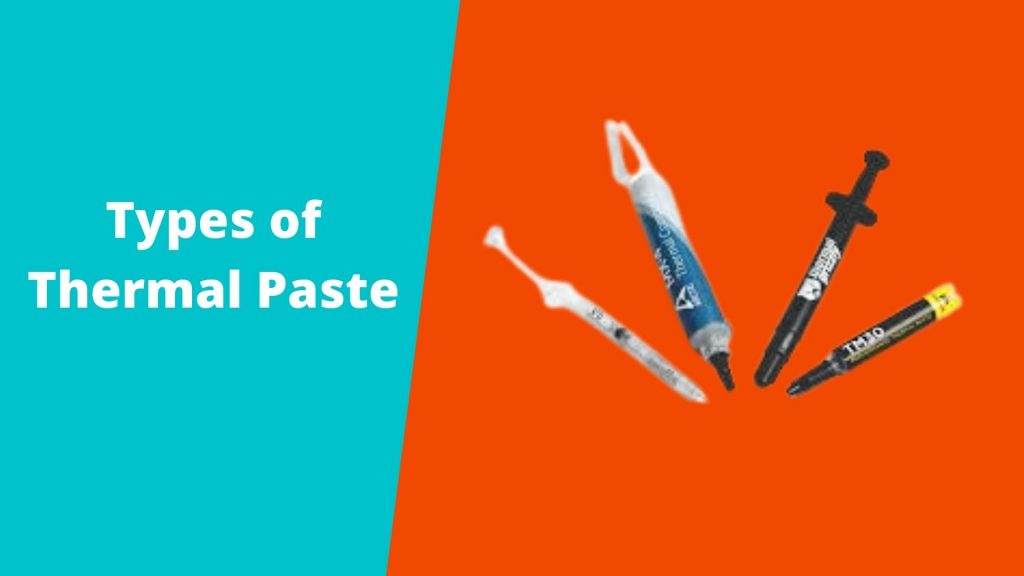 Being a gaming enthusiast means that your majority of the time is spent slacking off on your wonderful gaming PC. But this can hamper your PC’s ability to function properly if the temperatures are exceeding a given threshold. This is when you should allot a time slot for a thermal grease repasting session. If not, then what are you waiting for? Well, to make everything crystal clear, I want to mention something pivotal. I have already discussed in-depth “How to remove the thermal paste” and “re-apply a new one,” so check them out if you are new to this; otherwise, simply go ahead.

Today, I will be talking about the different types of thermal compound/grease (whatever you want to say) available for the users. Do remember that each of them differs greatly in terms of composition and application, so yeah. You need to be very careful when selecting a thermal paste because it all boils down to the successful application, and if not, your PC is doomed.

Before I begin talking about the types of thermal pastes available for the users, I can’t stress enough the need for the thermal compound. It’s a necessity to keep the temperatures at bay. Anyways, It’s time for the introduction to the different varieties of thermal paste.

First things first, the thermal paste comprises these important sub-features: viscosity, resistance, conductivity, and longevity. These are the main core principles that make up for a thermal paste. Generally speaking, the thermal pastes are categorized on the basis of their conductivity. In short, you’ll come across these terms “conductive” and “non conductive.” Basically, conductive pastes are metal-based (using metal liquid in the paste) and ceramic-based, whereas the non-conductive one is Carbon-based.

It’s worth penning down that you need to handle the conductive pastes with extreme care because they can literally cause sparks and short circuits on your motherboard if spilled. So, it’s always recommended to apply the conductive paste away from the electrically charged areas. But at the same time, the metal-based pastes have a longer lifespan., whereas ceramic and carbon-based compounds evaporate sooner.

Not negating the valuableness of non-conductive paste, metal-based thermal compounds are prompt in terms of dissipating heat. They are efficient and can easily bring down temperatures within a few minutes. Also, no, these are not the types but the classification of conductive and non-conductive pastes. I’ll be talking about the types of thermal paste in the next session of the article.

First things first, these metal-based compounds are loaded with fine metal particles. These include Aluminum, copper, gold, and silver. But the real question arises, why would you use metals in a thermal paste. The reason is quite straightforward than we could have ever imagined. Well, consoles and high-end PCs are subject to temperature anomalies due to the high requirements of today’s games. This is why metal-based thermal compounds are known for having fine metal particles that can dissipate the chipset’s heat.

Well, at the same time, this also has a disadvantage. Metals are electrically charged (electrical conductivity) and reciprocate whenever they get a chance. So, if you accidentally drop the metal-based compound on transistors or anything that has a high electric density, then your PC is gone for good. Soon, the charges will be conducted, and your PC will malfunction; this is why always handle metal-based compounds with care.

As the name suggests, carbon compounds are electrically dormant (non-conductive), ensuring that your PC will remain safe even after the spillages. What else does one want? Apart from this, the carbon-based paste has carbon fibers that give the paste its viscosity and non-conductivity. Not to mention, for the starters, Carbon-based pastes are recommended because of little to no experience in application. So, if you are new to thermal repasting sessions, I would highly recommend you use carbon-based pastes.

Silicone-based pastes lie somewhat between the metal and carbon-based pastes. To be honest, silicone-based thermal pastes are applied on custom-built PCs and are really not worth it. The reasons are quite simple. Number one, silicone is not a pure metal, which means it’s a metalloid (it has characteristics of both metals and nonmetals). This makes the silicone-based pastes a little conflicting in terms of thermal conductivity. Not to mention, the chances of silicone-based thermal pastes causing sparks and short circuits are somewhat probabilistic. You never know when the metallic nature of the paste manifests. But yeah, for the majority of the time, they are electrically dormant. What’s worth mentioning is the fact that these silicon-based pastes extensively make use of the oxide layer which means that the thermal conductivity will be purely based on the nature of the oxide (Aluminum Oxide, Zinc Oxide, etc.) used.

I believe this is all! If you have any queries related to the type of paste, do let us know in the comments.