Is G-SYNC Worth it in 2023 -Dismantling a popular belief 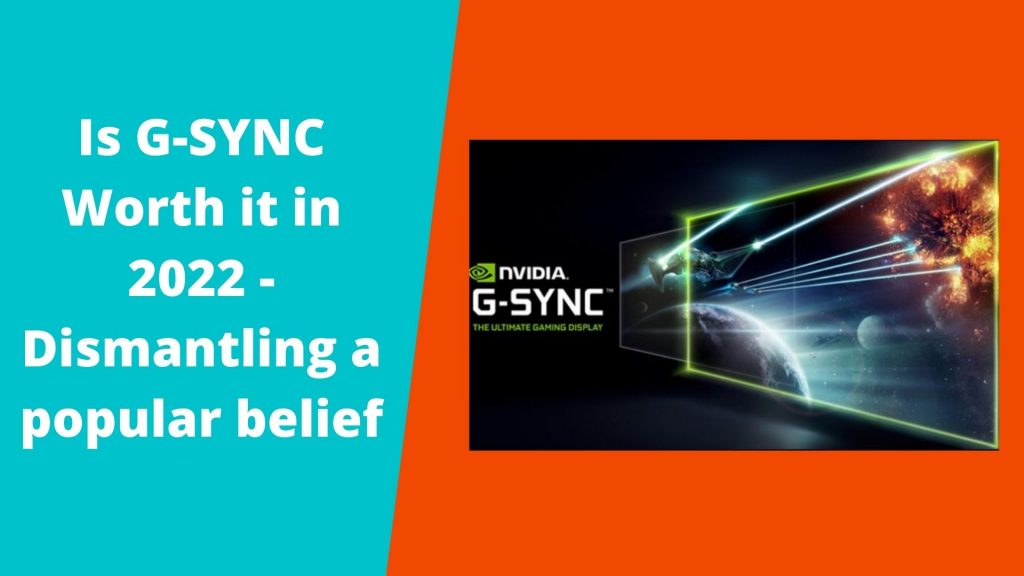 You must have come across the term “G-Sync” many times if you are a gamer. It correlates to one of the properties of a monitor, especially monitors that have 144+ refresh rates. Indeed, you’ll only stumble upon this feature if your monitor is beyond mundane technology. It has to be the latest with all the escalated features. G-Sync is only available with Nvidia Cards. For instance, if you are an AMD fanboy, then you possibly can’t turn on the G-sync feature but have to revert to FreeSync of AMD.

In this article, we will be answering the most popular question, “is g sync worth it?” So, without any delay, let’s begin!

What’s the concept behind the use of G-sync?

Before understanding what exactly is G-sync, you need to educate yourself on V-sync. I’ll save you from the hassle of searching online. Vertical synchronization is a process that helps in aligning the refresh rate of the monitor with the GPU. The feature is mostly available in games, where you can sync all the extra FPS with the maximum potential generation of the monitor. If there are extra FPS on the screen, they will be put down to reduce stutters, freezing, and tearing.

The concept of G-sync entails the same foresight. But there’s a difference between the two. V-sync makes use of a double-buffer solution to lock the frame rate at half the monitor’s refresh rate, thus increasing the latency. On the contrary, G-sync adjusts the refresh rate with the framerate at the same time, eliminating latency.

The use of V-sync is probable on refresh rates of 60-70 Hz because the change in latency/input lag is minuscule. But when you approach monitors that use refresh rates in the range 144-240 Hz, that’s where V-sync creates horrendous problems (high latency, input lags, forceful locking down of frame rates). That’s the reason why Nvidia proposed G-sync technology.

The best possible solution was to bring in G-sync, which uses adaptive synching technology. The Adaptive sync keeps the refresh rate in sync with the inevitable framerate fluctuations. Surprisingly, the outcome didn’t have any locked away FPS. Everything was smooth and tear-free-no wonder why G-Sync monitors are taking a toll on traditional monitors. But there’s a controversy that subsides most of the advantages of having a G-sync monitor.

What’s the backlash with the G-sync monitors?

For the most part, G-sync monitors are hell-bent on selling themselves away at a low cost. They are costly and usually take a toll on your budget, unlike FreeSync (another adaptive synching technology). Nvidia’s G-sync is indeed a hardware-based solution, which means that the technology relies on the GPU rather than the software itself. It allows the monitor to use VRR (variable refresh rate). Consequently, to implement such chipsets in the monitor, manufactures have to cram to produce high-end gaming monitors.

Although, when comparing a traditional monitor with the G-synch monitor, you might not come across any distinguishable features. They both look alike, but since one has G-sync enabled, it will relatively be expensive, maybe twice or thrice. Who knows!

Some G-sync monitors to look into:

G-sync does not work with AMD GPU

Most of the backlash comes from here. If you have an AMD GPU and plan to use the G-sync technology with your monitor, then I’m sorry to say it’s not possible. You can only put G-sync to use if you have the Nvidia card with you.

Surprisingly, AMD’s FreeSync is more open to customization. Since it’s an open-source software-based solution, you can rely on FreeSync monitors to do the job. They are cheaper and compatible with the G-sync system as well.

In short, you can have the same high-end experience with the FreeSync monitors at a subsidized cost, as what you get on G-sync monitors.

What solution did Nvidia come up with to tackle the backlash?

People started boycotting G-sync because of the price tags and a need to upgrade from AMD to Nvidia just for the sake of using it. Nvidia had to come with a solution that possibly fixed a lot of problems. In January 2019, Nvidia made a public announcement that it would release a driver update that would make any Nvidia’s GPU compatible with the FreeSync technology. In short, now you have the option to use Nvidia cards with the AMD FreeSync monitors, without spending hundreds of dollars on G-Sync monitors.

When are you in a dire need for G-sync technology?

The process of diagnostics is somewhat intimidating. At times, you don’t know when exactly to replace your monitor. The steps are simple, and all you have to do is follow them.

Final words- Is NVIDIA G-Sync Worth It?

There’s no concrete answer to it. It entirely depends on the user. I can’t force you to choose your poison, because both the options (Yes and No) have their effects. For example, if you can have a seamless gaming environment with whatever monitor you have, what’s the rush to buy another! The same rules apply to the contrary option. If you are unable to handle frame rates perfectly, then yes, you need to change it.

Not many GPUs, especially Nvidia’s, can handle the G-sync option. For instance, if you consider the GTX-10 series, possibly GTX 970, you might not be able to run the G-sync option on the monitor. Since these monitors are humongous, they need a powerful card to render the graphics at a variable refresh rate. Surprisingly, the notion was brought into consideration, and now in 2021, you somewhat can render graphics at a variable refresh rate. But again, it’s not that powerful. Don’t expect a miracle to happen. There are pros and cons for using G-sync, especially on low-end GPUs.

If you have the budget for upgrading your card, you better go ahead with the plan; otherwise, stick with whatever you have if V-sync is doing its job perfectly.

Last but not least, if you are an AMD fanboy, you might consider having FreeSync more than the G-sync, which is a rational decision. No arguments!

I would say no, it’s not. Gimmicks are lies, and G-sync is nowhere lying. The feature solves most of the input lag, stuttering, and freezing in games. So, yes, you can completely put your trust in G-sync and buy the monitor already.

Yes, it is. What happens is, at times, your GPU is unable to render properly at 1080p 144Hz. G-sync enables you to smooth out the gameplay and have the best experience while playing.

FreeSync is more reliable and considerate. It’s also cheap, not to mention. The recent findings are more leaning towards FreeSync usage than then G-sync itself. So, if you have an AMD card or the FreeSync monitor, you can channel the GPU/Monitor towards FreeSync technology.