HDMI vs DisplayPort vs DVI vs VGA: What’s best for Gaming? 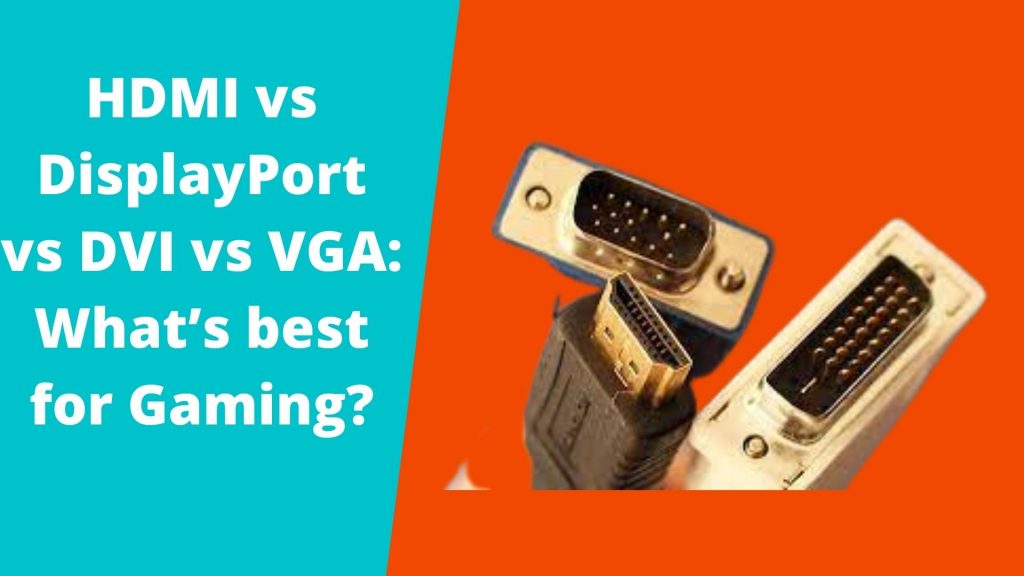 This will be a huge deal in terms of rendered graphics, so I would suggest you not skim through any portion of the article as you might skip some potential information. Well, as far as televisions are concerned, you can somehow get across them with the help of HDMI, which is sufficient to power your television. Whereas, when you have a monitor, either for Xbox, PS4, PS5, or PC, then you have a couple of options to select from. Usually, they are HDMI, DisplayPort, DVI, and the old-generation VGA.

To be honest, each of the connectors has its flaws. In general, there’s nothing like a perfect connector; hence we will be going to dissect the article in 4 discrete portions for each connector. Not to mention, we will entirely be focusing on HDMI vs DisplayPort vs DVI vs VGA, so yeah. You won’t stumble across any extra superfluous information.

Before I catapult this into a completely different direction, I would like to mention something about HDMI switches. Well, since you will be using the HDMI for display connection (if you want to), you can look into the usage of an HDMI switch if you are planning to connect multiple output devices. This way, you will be able to save a decent amount of money on buying discrete HDMI cables.

What is the minor and apparent difference between HDMI, DisplayPort, DVI and VGA?

The first thing people come to these connectors is the mode of transfer. Except, VGA every other connector makes use of Digital signal transfer which makes the overall quality of the picture candy to the eyes. In layman’s terms, the resolution of 1920×1080 (60 Hz) will be the same on HDMI, DisplayPort, and DVI, whereas it might greatly differ on VGA.

To make things easier for you, here’s the table you can look into:

Truth to be spoken, HDMI is the widely used connector in today’s gaming world, and it’s only because of its wonderful digital implementation. You must have seen them behind televisions and set-top boxes. To top it off, now they are also visible behind monitors. The real question is why HDMI is preferred over any other connector apart from DisplayPort. Well, I would say it’s because of the unwavering digital strength of the connector. Not to mention, HDMI can also carry uncompressed video and audio, ultimately leading to faster travel of data.

It’s worth mentioning, you can probably connect the HDMI connector on PCs, and consoles alike. This makes the cable an all-rounder in terms of connectivity, audio, and video. Apart from this, many gamers are using HDMI cables for playing games at 4k. So, in short, if you are a person who is completely into morphing their gaming experience into something extraordinary, then HDMI is a way to go. But here’s the thing. Recently, the manufacturers released HDMI 2.0, basically a newer version of what we had in the previous years. This new HDMI 2.0 is more efficient and signal-friendly.

There are a few things you need to bear in mind about the conversation set. If you are looking forward to converting the HDMI signals to DVI, then I would highly discourage you from doing so. That way, you will be losing major chunks of data due to loss in transmission.

As I mentioned, the HDMI cables have been revisited by many manufactures for major improvements. For example, as far as HDMI 1.4 is concerned, it has a bandwidth of 10.2 Gbps/s whereas HDMI can touch 18 Gbps/s. In 2022, HDMI 2.0 is what people are going for, so yeah, it’s rather best for you to look higher up the lineage to get the best gaming experience. Also, the reason for revising the HDMI to 2.0, is nothing but the increasing demand for 4k gaming. In short, HDMI 2.0 is specially designed for 4k gaming.

Last but not least, you also need to look out for variable HDMI connector sizes. Basically, you can grab hold of HDMI Type-A, Type-B, and Type-C. So before buying any sort of cable, it’s highly recommended to check your monitor port.

If you are into new GPUs like RTX 3060, or 3090, then I would recommend you to have a look at DisplayPort connectors because they are the epitome of perfection when it comes to rendering on such GPUs. For what it is worth, DisplayPort connectors are usually preferred for monitors with a native refresh rate of 144hz. This skyrockets the overall quality of the picture and gives you a chance to connect multiple monitors to a single GPU.

It’s sad to witness the demise of HDMI 2.0 because it had zero chances against DisplayPort 1.3 and 1.4. Like HDMI cable, the DisplayPort also received two significant revisions, mainly 1.3 and 1.4, and is far way better than any connector to date.

For figures, you can easily achieve 4k (1830 x 2160) resolution at 60hz without any issues. Not to mention, DisplayPort 1.3 and 1.4 have a relatively larger data transfer rate of 25.92 Gbits/sec. This is just breathtaking in my honest opinion.

Last but not least, DisplayPort is the perfect choice if you are a streamer or a gamer who’s into experiencing flawlessness. You can also increase the overall quality of the image with the help of AMD FreeSync or Nvidia G-Sync if used in conjunction with the DisplayPort.

It’s all fun and games when your only concern is the type of connector, but what if the connector itself is sub-divided into three categories. That’s where the problem arises. Well, DVI has three types of connectors, and each serves differently. For example, the DVI-A (analogue signal) only makes use of Analog signaling, whereas DVI-D (digital signal), and DVI-I (Integrated Analog and digital signal) make use of both Analog and digital sampling. But here’s the deal. DVI is a dual-link version that makes use of both Analog and digital, whereas DVI-D is only single.

For the DVI-A, it’s very rare to use it these days because of how disturbing the analogue signals are in the first place. It’s no better than the VGA, perhaps. It’s worth mentioning that there’s a significant and noteworthy difference between single-link and dual-link cables in terms of bandwidth. The single-link DVI cable can carry up to 3.96 Gbit/s and stagnates at 1920 x 1200 resolution. For the Dual-link it’s 7.92 Gbit/s and tops at 2560 x 1600 resolution. Not to mention, DVI-D can output 144hz at 1080p, and that’s the max it can reach.

Last but not least, it is true that the DVI is still used, but its demise is just around the corner; hence, get yourself settle with HDMI or DisplayPort as they have a bright future ahead.

To be honest, VGA exists from time immemorial. It’s the legacy cable, and people really do not resort to it, unless they have no choice. Since it has all the outdated hardware, you really can’t enjoy quality pictures; thus, the reason for shunning the cable in the first place. Well, if you are a CRT user (which is highly unlikely), then you can go for it as it’s best used with CRT monitors. Not to mention, the term VGA stands for Video graphics array and technically outputs decently at 1920 x 1080. The only issue is the downgraded color quality and picture.


What other things to keep in mind before finalizing the connector?

Apart from the type of connectors, there’s one more thing you need to be careful of. It’s the type of USB port. At times, without even preparing for it sufficiently, people en route themselves to the market and buy off retarded connectors. To be honest, that’s quite a chump attitude, and it has to be changed. When you have a USB type-A, why would you buy a USB Type-C connector? It doesn’t make sense, right? When your GPU can only power on DVI, why buy HDMI or DisplayPort connectors? So be wary of this as it will only end up causing you trouble.

It’s also worth mentioning that it’s always advised to rather go for HDMI or DisplayPort if your GPU can afford to run it. Otherwise, DVI will work all fine. But never ever go for VGA as it’s stupidity. I hope the article was viable enough to make you decisive. If you have any sort of queries, do let us know in the comment session.