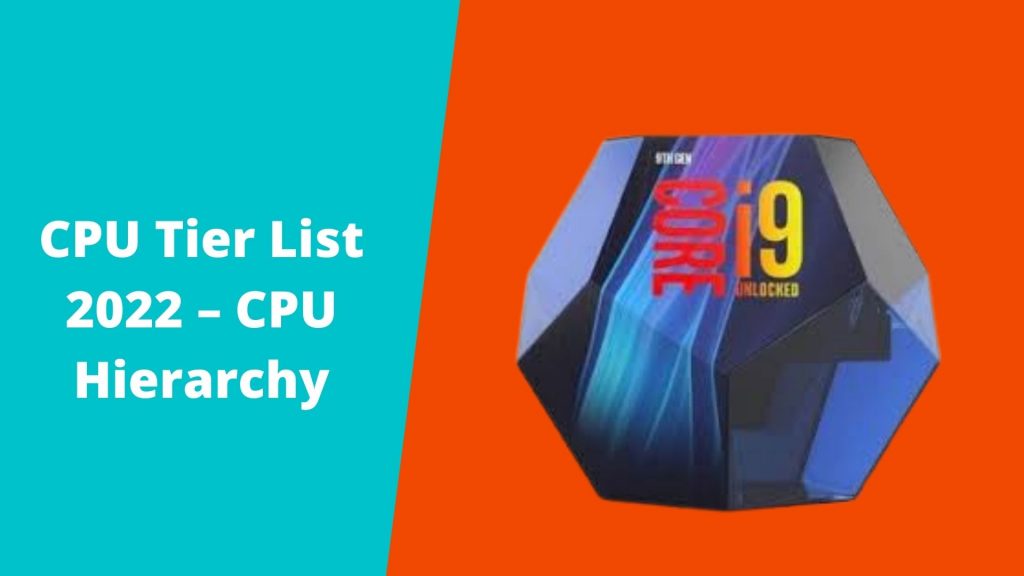 Intel and AMD both are giving each other a good competition time by releasing powerful gaming and workstation processors every year. Here you need to know that there is a difference between gaming and workstation processors, and they can’t be used in replacement of each other in a fair competition. You might know that the CPU is the major and necessary component of every gaming PC, and we can’t and shouldn’t compromise on it. In this CPU hierarchy, we have divided the top known processors according to their price and performance, and I’m sure you will find this CPU tier list helpful while buying or searching for a guide to a new processor.

Knowing the requirements helps in buying process of computer hardware very easily, but if you don’t, then it may be difficult and confusing. Also, you have to check a couple of factors in the processor, as not every CPU performs the same in games and other heavy applications. There was a simple time when I saw there is hyper-threading in core i3 and core i7 only but now the grounds are changed and even I get confused at pointing out the number of core threads of a desktop processor.

In this cpu tier list, you will find the performance of processors in the same category identical, but their specifications may vary. These CPU hierarchy charts are neither specific to gaming nor the multi-threaded applications, but we’ve made an overall list for every kind of user as the majority of the users are requesting a CPU tier list 2021.

On top of the list, we got some potent computer processors that offer exceptional performance in server related work. There I would like to mention that AMD Threadripper processors perform well in multi-threaded applications while the Intel processes are suitable for raw gaming performance. These processors have advantages over those mentioned in other tiers, but you might need to give them more power with the performance. The primary use of these processors is in the servers as they can’t give you maximum performance in games and consider this before buying.

Some dedicated people have reviewed the AMD Threaripper processors, and you need to know that these processors can easily beat the Intel i9 9900k in multi-threading performance. Rendering 3D models and video editing can be easily done with these gaming beasts but consider getting something typically made. Some of the models in this list got more than twenty cores, and we all know this amount of power is not required for gaming machines. Those users who have to do work other than gaming and need high performance can consider these processors.

The entries on this intel CPU tier list are some high-end models of the Intel Core i9 series and, yes, the high-end CPUs. I was thinking of including the i9 9900k too in this list, but because these processors are powerful enough compared to that eight cores and sixteen threads processor, I skipped it for the next tier. The least cores and threads in this tier are eight and twelve, while the most are thirty-two and sixty-four so we can imagine these beasts’ performance. You have to note that these processors work on sockets for the workstations, not the normal ones (LGA 1151).

The next processors on our list are the high-end gaming choices, which enthusiasts consider for their builds. This list includes some mainstream processors and some flagship models, and we’ve combined all of them there. If you’re looking for gaming performance, consider any processor from this list according to your budget and gaming needs. Along with gaming, you can also use these processors for some side work, including streaming and 3D rendering. The sockets used by these processors are the most common ones in the market, including the LGA 1151 and AM4.

All these processors’ performance is no budget high enough, and pairing them with any good graphics card can give you excellent frame rates. The core count of these processors starts from four and eight, and it goes up to sixteen and thirty-two cores and threads, respectively. You need to know about these processors if you consider gaming and stream, the best choice you can get is from AMD as they perform well in multi-threading while for pure gaming, Intel has the game. You may notice in this tier that Ryzen and Intel i7 processors offer the same cores and clock speeds, but their performance might differ.

As we already know that Intel cut off the Hyperthreading from some of their mainstream, and you will see this in the i9 9900k and some other CPUs. For AMD processors from the AMD CPU tier list, you will see simultaneous Multi-Threading, which is the same as Intel Hyper-Threading technology. We don’t have to worry about the Hyperthreading cut off because Intel has increased the physical cores so that they will handle the applications very well. The clock speed of these processors is reasonable, and with any aftermarket cooler, you can easily hit a 5 GHz figure with this.

The least number of cores in these processors are four and eight, while the highest number is six and twelve cores and threads. We don’t consider i5 9400f or Ryzen 2600 like processors for this tier because they are a bit weak compared to the entries from the first generation of Ryzen 7 processors. Intel Core i7 4th generation processors and Ryzen 7 first gen are comparable in some ways as they offer almost the same performance. But the thing that makes them different from each other is that the fourth generation is a bit old these days.

Also, we need to know that Ryzen uses the DDR4 memory while the 4th generation of Intel uses the DDR3 memory. That makes a massive difference in these processors, and it may limit the future upgrade options for you. So take care of these few things before buying any processor for your upcoming mid-range build. The TDP of these processors is not much high, and there you will get an advantage of a bundled CPU cooler with the Ryzen processors, which is good as far as you don’t overclock these processors.

The budget range of processors includes some entries from the Intel Core i3, i5, and Ryzen 3 and Ryzen 5 processors. These processes are okay as long as you don’t prefer high resolutions and in-game settings, but make sure that you are using some graphics card that matches these processors’ performance and doesn’t bottleneck them. Usually, these processors come with two cores and two threads, while the higher number of cores you can see in this tier are six, which are useful in any budget gaming processor. The TDP of these processors is not too high, and the Intel stock cooler can easily handle them.

The clock speed of these processors is not too high, but some support is overclocking, and you can hit reasonable clock rates with them. The budget gaming processors don’t support side applications like streaming and gaming, as they can barely run games these days. You have to compromise on a few things like resolutions and settings in the latest titles, but if you prefer to play Esport games, only these processors are useful. The sockets we need for these processors are very common, and they can be efficiently run on the LGA 1151 socket.

I want to mention these processors don’t expect something more than average with these processors.  The high-end models in this tier list are great enough, and they can be used for modern games and applications. Some of the processors in this list also don’t support boost clocks.

Every processor in the market has its specific use, and we can’t use a gaming processor for server type work and a server processor for gaming. We’ve made a CPU hierarchy where all of the processors are categorized so that users will easily get the best options for them if they know their requirements. These lists include the best value flagship and mainstream processors, including the Ryzen 7 2700x and the Intel Core i9 9900k, which offers the best overclocking potential and power in games. Check out the processors on this list, select the best one according to your budget, and get it for your upcoming build.

The computer processors are getting more and more powerful with time, and their number of cores and threads is increasing with every new processor coming. The best flagship processor we can get for gaming in 2023 is the i9 10900k and the i9 9900k, and from AMD, it’s Ryzen 7 3700x, and Ryzen 7 3800x and both of them offer the best performance for their price.

The best value processor is the one that offers the performance we need for the price we are paying. We can’t use gaming processors for professional work and vice versa, so we have to look at a couple of things, including the number of cores and threads and much more. So always check the detailed specifications of the processor before buying it for your gaming rig.