GPU Fans Not Spinning? Here’s How to Fix the Root Causes! 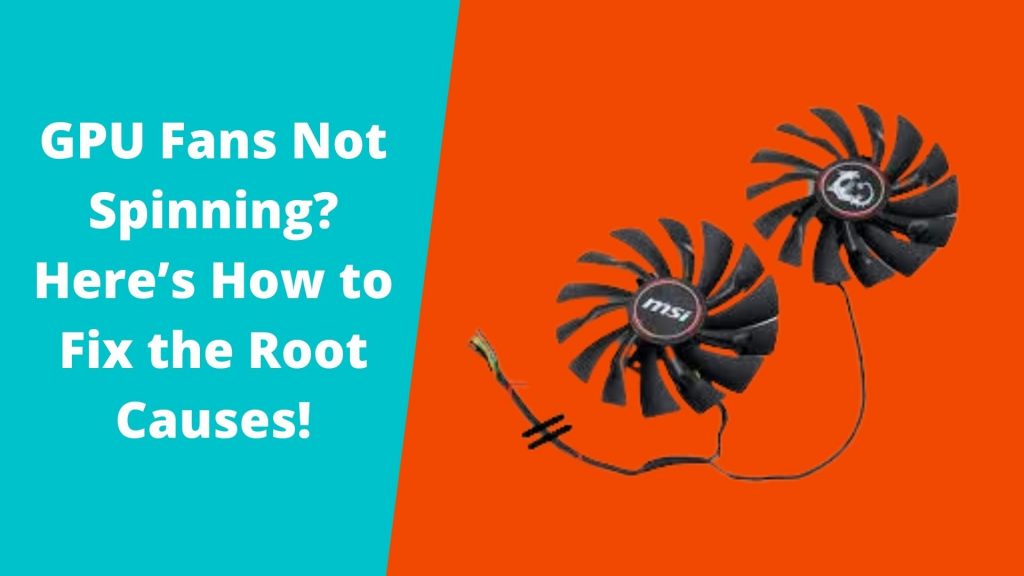 “What could be excruciatingly painful for a gamer? A dead GPU!”

It’s highly problematic when GPU fans stop spinning especially if they are eons old. Ironically, many users have reported that their newly bought beast systems have malfunctioned to the point of a dead-end. It’s apparent when the GPU fans don’t kick-off, resulting in a sweltering ambiance that can shorten the lifespan of the component.

Some of the anecdotes also present a non-biased route to the problem. Stuttering and freezing whilst gaming. It usually starts when your system stops handling the games it used to, indicating a severe underlying problem.

Well, who’s here? Your savior. This guide will enumerate all the root causes that promote dormant fans. Luckily, there are a few solutions you can implement to purge out all the root possibilities and give your fans a new kiss of life. It’s mandatory that before reading the guide you keep certain bulletins in mind-GPU Temperatures and statistical performance data.

It’s quite common for modern GPUs to stay put until it reaches a certain temperature. The state of the GPU under the fans doesn’t work is known as “Idle state”. Before bouncing off the walls, you should be aware of the fact that this feature is in-built and you can’t do anything about it. The reason for putting such a feature is to extend the longevity of the fans-because there’s a certain limit to their spinning power-and promote boosted performance.

The idea is also to cut off the noise and electrical levels. It’s scientifically proven that high voltages result in a higher thermal production rate. To withstand and prolong the life of the GPU, the idle state was implemented.

So, what can you do?

Your priority should be to run stress benchmarks or run GPU-intensive applications (Games). This will ensure that your GPU usage remains exponentially high resulting in abnormal temperatures. As soon as the GPU will cross the threshold temperature set by the manufacturers, the fans should kick-off. If they do not, the problem is severe and worth looking at.

Side note: You can install the MSI burner to monitor the temperatures and voltage levels.

It’s one of the simplest solutions you can get across which is globally recognized and accepted. Restart your PC!

Why should you restart your PC?

Let me explain it in layman’s terms. Your components are all connected with the PSU and sometimes the PSU is cross-chained with a stabilizer. A little fluctuation in the voltage levels can affect PSU severely. What happens is that the PSU stops providing required Watts to the components to save its own life. A fresh start can level up the misaligned voltages and power problems.

When everything goes normal, the chances are that GPU fans might start working again. If not, keep reading the guide, lad. You need to try all of the possible solutions before you come to a halt.

Your second most priority should be to solve the cable mismanagement. It has been recorded that most of the time the wires going back to the components are either faulty or loose. What you can do is take out all the necessary wires and plug them back in, especially the 8-pin or 6-pin connector which comes through the power supply and links back to the GPU. Chances are that the connectors which power up the graphics card are not providing sufficient power. Ensure that you hear a “tick” sound that indicates the wire being pushed properly inside.

Now here’s the real deal. You are supposed to troubleshoot your power supply as well if needed. The recommendation is worth noticing if you have installed a lowered rated PSU. When you buy GPUs, there’s this manual that elaborates on every nick of information. Usually, you’ll find the required Watts to turn on your graphics card. If you have hoarded your system with unnecessary components that lead to a decrease in the resultant overall rating, the chances are that you are on insufficient supply.

What you can do?

There are two routes to take from here.

The first route ensures that you have the bare minimum to support all the components installed in your system. Simply, buy a new PSU or ask someone to lend you one for a limited amount of time so you can ensure full troubleshoot. If the fans start spinning due to the increased rating, it simply means that your old PSU was curbing on essential supply.

The second route is the easiest. You have to disconnect all the not-so-essential attachments to ensure that the PSU only gets connected with the GPU and CPU. If by chance, the fans start working, then you know what to do. Burndown all the unnecessary burden! Or get a new PSU.

One of the most common blunders done by PC-builders is that they forget the proper procedures to be followed. There’s a dedicated way to make the GPU sit properly on the motherboard. What you have to do is acknowledge all the click sounds on the motherboard. If you can register all the necessary sounds that indicate a GPU being plugged properly, then you are good to go.

I am very well aware of the fact that most people, including me, don’t dust off the case. This leads to congestion and temperature problems. The real bummer comes in when there are unnecessary debris and dust particles on the fan blades. This immobilizes the GPU and deprives it of spinning power.

The fan blades are designed in a way to withstand large dust particles. They regulate the environment from time to time but unluckily can accumulate particles that are not easily dust off.

To solve this horrendous issue, what you have to do is open the case, use a compressed air canister, and whoosh away all the dust from the case. You will be experiencing a little tornado in your room. Fight it off! To minimize the dust issue on the GPU, take out the component, and for a good minute or two keep blessing it with the pressurized air until all the stuck particles go away.

How about you take a step further and resolve the issue for once and for all?

Remove the fans! Yes, you have to detach all the embedded fans from the GPU and clean them off from clean water. When you are done rinsing off all the dust, blow the air to dry the fans and plug them back in. This should solve the problem.

If not, then keep reading!

Screw heads! They might be causing the problem. It’s known that they are made up of metallic particles which are renowned for turning into rust. If this is the case, you are in a need of oiling schedules. The best way to get started is to find some sewing machine oil.

The oil will loosen the constriction that has been involuntarily inserted between the fans. First thing first, remove the GPU. You don’t need to oil the motherboard, because that can short circuit the whole thing, and you are not in a position to cause further loss.

When the GPU is detached, now simply put the oil droplets on the screw heads. Over time, the screws will transport all the absorbed oil to the bottom end, reducing the constriction.

Hopefully, this will bring back the fans on track. Unfortunately, if they still do not spin, then you need to try a couple of things more.

Apart from hardware issues, there is a possibility that the software is causing the problem. When you have outdated software it usually results in hardware malfunction. To resolve the issue what you can do is upgrade or clean install all the GPU drivers.

Visit the AMD or Nvidia driver store, download the latest drivers, and install them. When you are done with the installation procedure, now is the time to look at the proprietary software given by AMD and Nvidia: GeForce Experience and Radeon Software.

The reason for tweaking the default settings is to bring back normalized settings for the fan curve. If you are successfully able to run the fans by tweaking, then celebrate. Otherwise, you have to go a long way.

If none of the aforementioned fixes work, then it’s a hardware failure. It happens when you have older cards running for eons. These fans have a limited lifespan. After that, the chances are that they will not work properly.

What you can do to solve the problem of faulty fans?

Typically, you will be required to have third party software installed on your computer such as MSI Afterburner. This application is targeted at overclocking enthusiasts but can be used for monitoring temperature curves and fan speed. What you have to do is set an aggressive curve that will forcefully kick the fans off at a lower temperature. If it still doesn’t work, then you are in a need to replace those dead fans.

Usually, you can get those fans for around $50. It’s required you stick yourself to Corsair or Cooler master fans because of credibility and durability.

This step is one of those steps which require rigorous labor and some understanding about motherboards. So, yeah here’s a warning: do not mess up with the motherboard or plugs unless you know how to get around them.

Forsooth, one of the last workarounds to fix the fans. Let’s cross fingers! To begin, what you have to do is unplug the GPU and take it out of the box. Why? Well, you are going to test the PCIe slots and the motherboard itself. There are slim chances that your GPU is not getting connected properly to the motherboard regardless of the proper sitting into the slot.

If you have an Intel CPU, the integrated graphics card can handle the PC. The second step is to turn on the IGFX mode which will turn on the PC on BIOS settings. That’s all. You can’t go further than BIOS and that’s your station. You have to troubleshoot the motherboard through BIOS.

If your system is booting up without any problems, then the fault is in the GPU and not the motherboard. Here you go. The ultimate verdict: you need to replace/change your GPU if you can’t handle extreme temperatures.

Time to buy a new GPU?

Through the above-mentioned steps we postmortem the GPU. Even then, if the fans are not functioning, then you are in a dire need of an upgrade. A side note, it’s always better to shift to a high-end graphics card that has a prolonged fan life rating. When we talk about the latest GPUs, the first thing that shoots around is the price. You don’t have to worry about that. There are hundreds of top-tier GPUs you can get your hands on at cheap rates. Good luck! Hopefully, this guide was worth a read.

Not in particular. Well, overclocking only so far affects the temperatures of the GPU. If your card is overclocked, you don’t have to blame it for the dormant fans.

If you are looking forward to getting top-tier fans, then they might cost you around $70 to $90. Otherwise, you can always root for typical fans.

It’s time to replace the old card because, after a few months, the card will die anyway due to high temperatures.