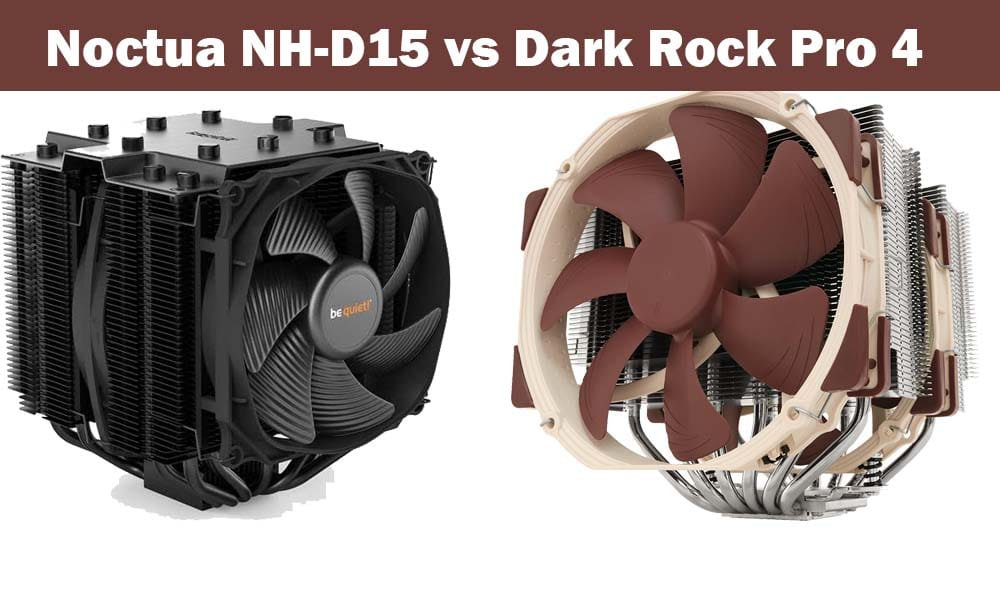 If you want to get the best performance that the processor can provide then you would certainly want to have a powerful CPU cooler to keep the temperature of the CPU low.

Although, the stock CPU cooler that comes with the processors is capable of keeping the temperatures of the processor in check. However, if you want to overclock your processor and want the best, stable, and efficient cooling performance then you should get an aftermarket CPU cooler.

We will be talking about the Noctua NH-D15 and the Be Quiet Dark Rock Pro 4 CPU coolers, which are one of the top CPU air coolers available in the market.

Their performance is on par with some of the AIO cooling solutions. Both are very popular CPU coolers to be used for enthusiast-level PC builds and are often compared with one another. Many of the PC builders happen to stumble upon the same question during their build, which CPU cooler to go with?

Here in this guide, we will be doing a comparison between the dark rock pro 4 vs Noctua NH-d15 CPU coolers to help you choose the right one for your PC builds.

Noctua NH-D15 air CPU cooler has the same dual-tower CPU cooler design as the Dark Rock Pro 4 but the Dark Rock 4 will be able to provide somewhere around 1-3 degrees cooler performance under load when compared to the NH-D15.

This depends on many different variables like airflow, case internals, and many other factors that can affect thermal performance. But, if you want the best performance and want to squeeze every last bit of speed out of the processor then Dark Rock Pro 4 will certainly help you achieve this.

On the other hand, the NH-D15 CPU cooler has a nice simple design. It has a silver metallic color on the Heat Sink and the fans have Noctua’s traditional brown color scheme. It has six copper heat pipes that are soldered to the base, which is a nickel-plated copper base.

Every fin in both of the stacks of the CPU cooler has been soldered directly to the heat pipes, which allows the low CFM fans to work well and increase the CPU cooler’s efficiency.

On the other hand, be quiet Dark Rock Pro 4 lives up to its name and performs much quieter under load and at idle when compared to the Noctua NH-D15. The Dark Rock Pro 4 will be able to operate at 1-3 decibels lower noise.

It isn’t much, but if you want a PC that operates quietly, then the Dark Rock Pro 4 is certainly a better choice. Especially, since both of the CPU coolers have a very similar cooling performance.

The Dark Rock Pro 4 also looks better than the NH-D15. It has a sleek design with a nice matte black finish to it, which will look fantastic in any PC build. Noctua’s brown color scheme doesn’t go with every PC color scheme but black goes with everything.

It has a top-notch build quality and has seven heat pipes, which will help in getting the heat away from the processor. Dark Rock Pro 4 CPU cooler’s base has two parts with different metals. The top section of the base has a pre-cooler and is made of aluminum, and the lower part of the base is made of copper and is responsible for transferring heat from the CPU to the heat pipes.

Why Be Quiet Dark Rock Pro 4 is better?

On the very first look, it looks better than the NH-D15. The matte black color scheme will go with pretty much any PC build. It also operates at a slightly lower noise than the other one and provides a very similar cooling performance. If your main goal is to have a quieter PC then the Dark Rock Pro 4 is the better choice for you.

That depends on your needs. It will keep the processor from thermal throttling because the temperature will not get so high and it will make sure that you get the best performance that the CPU can provide. Although a stock cooler is good enough, if you want to overclock the processor then you should get an aftermarket CPU cooler because it will provide better and more stable cooling performance to keep the temperature of the CPU in check.

It is a fairly simple task if you know what you’re doing, but some CPU coolers have a little complicated mounting mechanism. All you need to do is take out the already mounted CPU cooler (if there is one already mounted) by unscrewing it from the socket.

Now, simply grab the cooler and hold it over the CPU, and carefully line it up with the screws with the holes in the motherboard or the standoffs that you installed earlier. Just place the cooler on the CPU.

Just screw it in using an X pattern. Attach fans if you removed any fans from the cooler or still have to install any. See the manual to figure out how they will connect, which depends on the cooler and the fans that you’ve got. Now that you have attached everything, ensure that all of the fans have power. A simple air cooler fan will have a specific connector on the motherboard, it may have CPU_FAN written next to it. Regardless of your setup, make sure that you have everything connected to their appropriate power source. Voila! You’re all set.