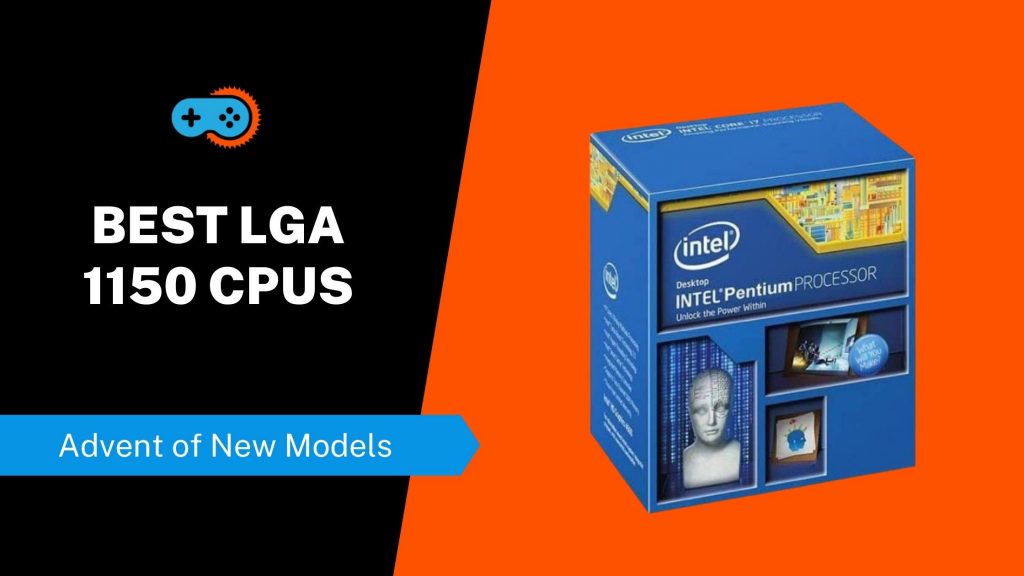 There are many CPUs that you can pair up with your gaming system, but with the advent of new models, the dilation took a new form. In 2023, you can get hold of 10 models for the same Intel generation processor, which means that cherry-picking horizons are never-ending. But here’s the catch. If you have a decent budget-friendly or a mediocre gaming system, you would need not purchase 6th or 7th generation processors. The reason is quite simple. Higher generation processors will only end up bottlenecking your average GPU. If that happens, your system is a complete waste, because now you would not reach the performance height you are destined to. That’s why I have brought you the best LGA 1150 CPUs that are usually put in 4th generation and Xeon processors. It’s worth mentioning that these processors are the best 1150 CPU for gaming.

They indeed belong to older generations, but they work just fine. Before enlisting the worth looking in products, I would first pitch in why we select LGA 1150 CPUs for you in 2023. If you want to read the reasons for choosing the best 1150 CPU then Click Here.

It’s time to move towards the actual product review session. Without any further ado, let’s begin the guide to finding the best LGA 1150 CPUs.

Intel Core i7 4790K belongs to the “K” family that simply indicates that you have the power to overclock the processor to its maximum possible potential. With this processor in hand, you can go up to 4.40 GHz, which is quite enough to power on most of the latest AAA games and applications. It’s worth mentioning that the processor is quite old (2014) and might not cater to your extreme needs. Nonetheless, it’s a versatile and functioning chipset you can get for your gaming system in 2023. The processor has a decent transistor density, which makes it worth a while. On top of that, the processor has 4 cores and 8 threads for multitasking and enhanced performance.

In addition to that, the processor comes with a dedicated IGFX (Intel HD Graphics 4600), which sort of acts as a self-bootup tool when there’s no external card lodged into your gaming Pc. Moreover, the processor can tune in between different resolutions @60Hz, which makes it compatible with most GPUs in the market. Last but not least, the maximum memory bandwidth of the processor is 25.6 GB/s, which is commendable, in my opinion.

Let’s welcome another “K” version into the list. Intel Core i7-4770K is a wonderful and top-notch processor you can get for your gaming build. The processor can be overclocked to 3.90 GHz by simply tweaking the BIOS settings. Not to mention, the processor has 4 cores and 8 threads, which is enough to power on all the processes and applications in your build. It’s worth adding that the processor can run most of the AAA titles to date without any known issues. On top of that, the processor comes with a dedicated Intel HD Graphics 4600 for turning on your build without an external GPU. Apart from this, the processor can go up to 4096 x 2304 @ 24Hz resolution without any stutters and lags. But for that to happen, you need to ensure that your processor is paired up with a decent GPU.

The processor’s maximum memory size is 32 GB, which is enough to run all the high-end applications. Last but not least, the processor makes use of Haswell architecture, which is way better than many old architectures.

Intel Core i5-4690K is another overclockable processor up to 3.90GHz, which is enough to run most of the latest AAA titles. It’s worth adding that the processor’s overall cache is a 6M and takes on a Devil’s Canyon architecture. Sadly, the processor is discontinued, which means there will be no more chipsets for this particular entity, hence, making it another extinct product. But don’t worry, the product is still supplied to date, without any new increments in the lineage. Anyways, the processor has a decent transistor density and works round the clock for pitching-in valuable and efficient overall performance. It was recorded that i5-4690K could run Assassin’s Creed Odyssey at low settings with constant 30FPS. Well, that’s commendable considering the processor belongs to the era of the early ’20s.

The maximum memory bandwidth slotting remains at 32GB and offers a whopping transfer rate of 25.6GB/s. The processor also supports OpenGL and DirectX 12. I would say it’s a decent, affordable CPU.

The reason for putting Core i7-4790 below the Core i5 is nothing but the use of the “K” version. Generally, “K” version processors are better than non-K versions because of the ability to overclock to the maximum possible potential. It’s worth mentioning that the processor makes use of Haswell architecture, which is superior to the majority of the older generations. On top of that, the maximum turbo frequency reached by the processor is 4.0 GHz, which is enough to run most of the latest games. I would say it will be wise and prudent to pair up your i7-4790 with either GTX 1080Ti or GTX 1070. Not to mention, the processor can run in parallel with the majority of the new cards; hence, making the bottleneck rate plummet down.

Not to mention, the processor has a total RAM capacity of 32GB and works at 25.6GB/s, which is applaudable, in my opinion. Last but not least, the processor is highly compatible with the majority of Windows applications and software.

Initially, Intel Xeon processors were made to run workstations, and to be honest; it just works the same for today’s requirements. Intel Xeon processors are power-hungry and require a decently laid out computer system for working efficiently. Not to mention, E3-1231V3B belongs to Haswell architecture and has a max turbo frequency of 3.80 GHz. Unfortunately, Intel Xeon processors don’t have any dedicated embedded IGFX, which means to run your system, you would need an external GPU. Indeed, a backlash! For the total memory capacity and bandwidth, it remains the same (32GB and 25.6GB/s).

The instructions set include 64-bit support, SSE4.1, SSE4.2, and AVX2 for enhanced compatibility with newly arrived games. It’s worth adding that the processor has an 8M cache and runs at a base frequency of 3.40 GHz. In conclusion, Intel Xeon E3-1231V3B is a majestic cheap processor to get in 2023. Go and buy it already!

Intel Core i7-4770 is a majestic processor that you can get for your average gaming PC. Surprisingly, the processor belongs to Haswell lineage, making it another insurmountable entity in the best lga 1150 CPU list. Not to mention, the processor has 4 cores and 8 threads, which is enough for multitasking and running games at decent settings. It’s worth adding that you can go to a turbo frequency of 3.90 GHz for smooth performance. Unfortunately, the processor was discontinued in 2017, which means no tweaking or addition to the lineage; however, it’s still available for sale. For the performance, it’s of top-notch. You get 32GB of RAM slotting, with a maximum transfer rate of 25.6GB/s, which is quite applaudable.

Last but not least, all the major instruction sets are available in the processor, which means you can use them on all AAA latest titles. All in all, it’s a wonderful processor that you can get your holds on in 2023.

Intel Pentium G3220 is the last entity on the list, and to be honest, it’s a decent processor with multiple options unlocked. Although it’s true that you can overclock it, the processor is still worth a shot. The base frequency stays at 3.00 GHz and has a 3M cache, which is way lower than any product on the list. Not to mention, the product first appeared in 2013, which means by now it has been seven years, and it’s pleasant to see it still working efficiently. It’s worth adding that the bus speed of the processor is 5GT/s, which hardly costs you around $50. That’s too cheap, right? No wonder why it’s the cheapest product on the list of best lga 1150 CPUs. On top of that, it uses Intel HD graphics for 4rth generation intel processors and has a graphics base frequency of 350 MHz, which is enough to turn on your system without an external GPU.

Additionally, the processor’s maximum resolution is 2560 x 1600 @60Hz, which is quite appreciative, in my opinion. All in all, it’s a wonderful processor!

What are the reasons for choosing the best LGA 1150 CPU?

I’ll be crystal clear about this bulletin because users do not pay enough attention or heed to what goes into marketing gimmicks. Some processors are just there to showcase and not fully optimize your system; whereas, a few are cheaper but give in their 100%. That’s where you need to be careful; hence for helping you out, LGA 1150 makes a perfect match for your average gaming system.

Intel has gone lousy, and we all are aware of how messed up a few of the coming generations are in terms of overall performance and overclocking profiles. From the research, it was apparent that older generations like the 4th and 5th were considerably durable and healthy.

These 4rth generation processors make use of Haswell architecture, which is performative and efficient in data-handling. Not to mention, these processors pitch in a significantly higher performance ratio than a couple of new models. So, if you have RX 580 or GTX 1060, LGA 1150 CPUs will be best for you.


Piecing out the final evidence

Indeed, most of the list processors are not future-proof for gaming generation titles, but they still make up a good proportion of gamers in the pool. Usually, people buy expensive processors and GPUs, which might not benefit them in the long run. That’s why such an article is penned down to help our fellow gamers understand the concept of how they shouldn’t be running behind expensive titles, but rather root for something between the line. If you think I missed something, do let me in the comments. Your constructive criticism will be appreciated.

yes, they are. LGA 1150 was released somewhat in late 2013 to early 2014, which means it has been six years. Something that ancient will fail to load the majority of the coming titles on PC. So, if you are looking forward to future-proving your gaming build with an LGA 1150, sorry to say you are making a blunder.

Well, this socket belongs to Haswell and Devil’s Canyon architecture and differs greatly in terms of performance and efficiency ratio. To be honest, LGA 1150 will not perform as efficiently as Skylake or the latest processors.