We all know that RTX 2070 got a significant spot in Turing-based graphics cards as a mid-range GPU with excellent performance. 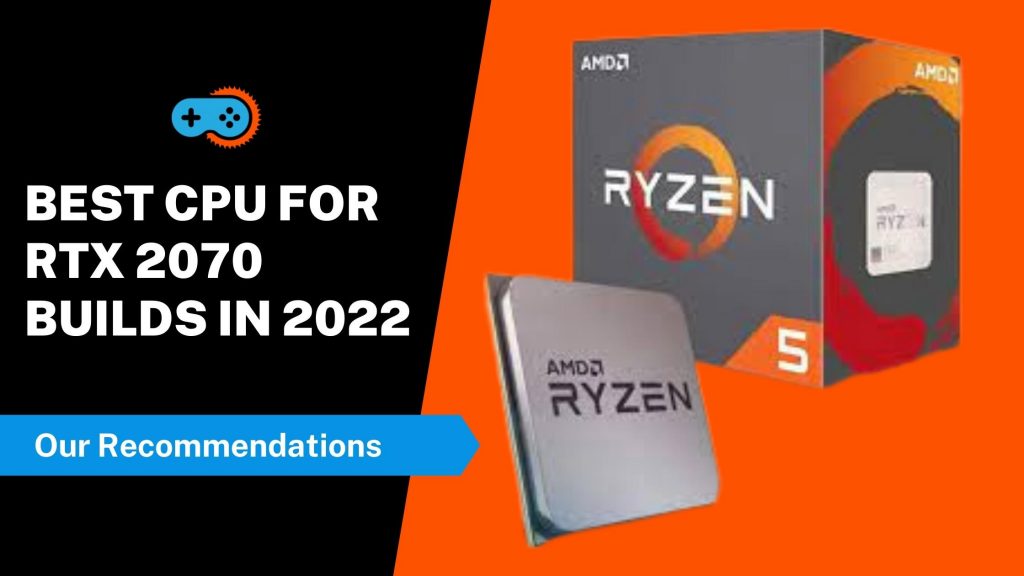 This GPU is capable of maxing out some of the latest titles at 1440p resolution, but you might need to compromise on in-game settings.

And you might already know that pairing a high-end GPU with some low-end processors can limit their performance, thus we may not get the performance that CPU is made to offer, and we call this bottleneck.

This matter seems absurd, especially if you don’t know what hardware you need for your PC, so taking care of this, we have compiled a list of the best CPU for RTX 2070. We got some choices from budget-level processors to high-end enthusiasts hardware, and you can choose them according to your budget.

All these processors can be used with both RTX 2070 and 2070 Super, and we have options from Intel and AMD side. So without doing any further ado, let’s start the list with our first processor.


Best CPU for RTX 2070 – Our Recommendations

There are some of the options you can consider getting for your upcoming RTX 2070 builds, but the main thing is the performance for the price. You can check out reviews of each processor there and can get an idea of which one will be best for you.

The first on our list is Intel Core i5 9600k, which seems controversial between the Ryzen 5 3600 and Intel i5 9600k because of its price and performance ratio.

Intel broke the chain of hyperthreading from their 9th generation i5 processors, but you don’t have to worry about this because these extra cores and threads are enough to handle applications other than gaming. Also, it’s a perfect match for RTX 2070 and significantly eliminates every possible bottleneck. I found this processor better for pure gaming, and raw performance; otherwise, R5 3600 is a compelling option.

We are getting 6 cores and 6 threads clocked at 3.70 GHz, which is good, but on boost, it reaches up to 4.6 GHz. The i5 9600k has excellent headroom for overclocking, and you can enjoy a better gaming experience with it if you consider pushing its clocks. But as it doesn’t come with a stock cooler, you might need some aftermarket cooling solution (AIO or Air cooler).

You are good to go with this processor if looking for something great for RTX 2070 under a reasonable price tag, and of course, it offers excellent value for its price. And we are considering it for RTX 2070, and if you don’t want to overclock it, I would recommend you to go with the F-series CPU because they lack iGPU and are slightly cheaper than K and non-f versions.

The best bang for the buck processor you can get for RTX 2070 is the Intel i7 9700k as it’s more appealing because of additional cores, threads, and a reasonable price tag. Likewise, there are also two options available in this processor; one is with the K suffix while the other one is the f-series. You can save a few bucks if you don’t need an integrated graphics card.

This processor offers eight cores and threads and is best for raw performance while it also performs well in multi-core applications. I’ve reviewed several Intel and AMD processors but found this one more appealing over Ryzen 3000 series in pure gaming. Under the budget category, this one is good over i9 9900k because of its price but you will be compromising on the performance.

The overclocking power of this processor is impressive as it can easily hit 4.9 GHz on turbo boost while the base clock is 3.60 GHz. The thing where this processor disappoints its users is the lack of a bundled cooler and you would have to get an aftermarket cooler. Also, lack of hyperthreading and high price doesn’t seem reasonable, and from my point of view, a price cut would be appreciated.

This processor is slightly more expensive than the AMD Ryzen 7 3700x, which, in multi-core performance, AMD beats it. I would rather say if this processor comes with a stock cooler and has a price cut down, there might be no other better choice to go with. Right now, I would say that this is a high-end CPU to pair with the RTX 2070 for future games and for getting high resolutions.

If you are a hardware enthusiast and looking for a processor more powerful than i7 9700k, ignoring the budget there, we have something for you. Intel Core i9 9900k is no doubt a great gaming processor but a bit expensive than the one mentioned above while there is not much gaming performance difference.

The multiplier of this processor is factory unlocked and you can overclock it to push clock rates and can get a better gaming experience.

This CPU lacks a bundled cooler like the other Intel 9th generation processors and you might need a powerful aftermarket cooler to hit 5GHz.

We are done with Intel processors and heading towards AMD and we have the Ryzen 5 2600x. There we have two options where one is R5 2600, and the second one is R5 2600x, and both of them are very identical to each other. The only difference you will find between them is the improved clock speed and a better-bundled cooler, and I would recommend you the X version if you prefer overclocking.

Getting an AMD processor and ignoring overclocking on it doesn’t make sense because most users get AMD CPUs because of their unlocked multiplier. The AMD Ryzen 5 2600x offers six cores and twelve threads along with hyperthreading support, and it gives you the best performance in single as well as in multi-core applications. If you are on a budget and want a processor for gaming and streaming, there might be no other option than this.

The thing which disappoints me a lot about this processor is its in-game performance as if you pair it with some high-end GPU, i5 8400 will outperform it. If you are getting it for non-gaming purposes, it will be the best piece of product for you. Also, with its performance, you might need some aftermarket coolers because the stock cooler doesn’t support serious overclocking.

Those users who are looking for CPUs for Nvidia Geforce RTX 2070 under a budget category there might be no other choice for you. There are two options, and you can choose them according to your budget, but the main difference between them is overclocking power and clock rates.

The second CPU from AMD is the Ryzen 5 3600x, which is much identical to the R5 3600 but has slightly higher clock rates and TDP. Also, with some performance differences, there is a bit of price difference too, which doesn’t seem much but for its performance, it’s worth it. The reason to consider is its price, performance, and Wraith Spire cooler, which is an advantage over i5 9600K.

Comparing it with the i5-9600K processor, it has some significant advantages in performance and cooler. In the end, I would say that it’s the best CPU to pair with the RTX 2070 in 2023.

Ryzen 7 3700x has a significant advantage over the R5 3600 as it has two extra cores and four additional threads, which gives you significantly improved performance. This processor is best for single-core as well as multi-core applications but it’s pretty good at working with software or applications.

The competitor of this processor from the Intel side can be i7 9700k, but this CPU comes with a higher price point and lacks a CPU cooler, as mentioned above.

Ryzen 7 3700x has eight cores and sixteen threads, which is enough for gaming and daily-life use applications. The base clock of this processor is 3.6 GHz, while on max boost, it reaches up to 4.4 GHz, and it’s factory unlocked so you can hit higher clock rates with it.

The thermal solution you will get with this processor is Wraith Prism, which has RGB lights and a great combo for RGB builds. Its stock cooler can be used if you are not going to do some serious overclocking with it while you can easily push it to new limits with any good cooler.

The best thing in Ryzen 3000 series processors, especially in high-end models, is simultaneous multithreading, which gives you a great experience in editing, rendering, and streaming. Also, this processor is best to pair with RTX 2070 and even some high-end models, and you are not going to experience any bottleneck with it. In the end, I would say that this processor is best for RTX 2070 if you got a high budget.

We all know that RTX 2070 and 2070 Super are mid-range graphics cards and give an excellent performance in games at high resolutions. Our team did excellent research and compiled a list of the best CPU for RTX 2070, so you can eliminate every possible bottleneck.

The best budget processor you can get for RTX 2070 is the AMD Ryzen 5 2600 or 2600x, and it performs better in games as well as in software and apps. The mid-range processor you can get is Ryzen 7 3700x and Intel i7 9700k, while both of them support overclocking and offer excellent performance.

In the high-end category, we have the i9 9900k, which is no doubt a great addition to this list and future proof for the upcoming several years.

Thermal Grizzly Kryonaut is considered the best thermal compound to cool down chips under a good CPU cooler with a copper base. However, Thermaltake TG-7 is also useful for overclocking intensions.