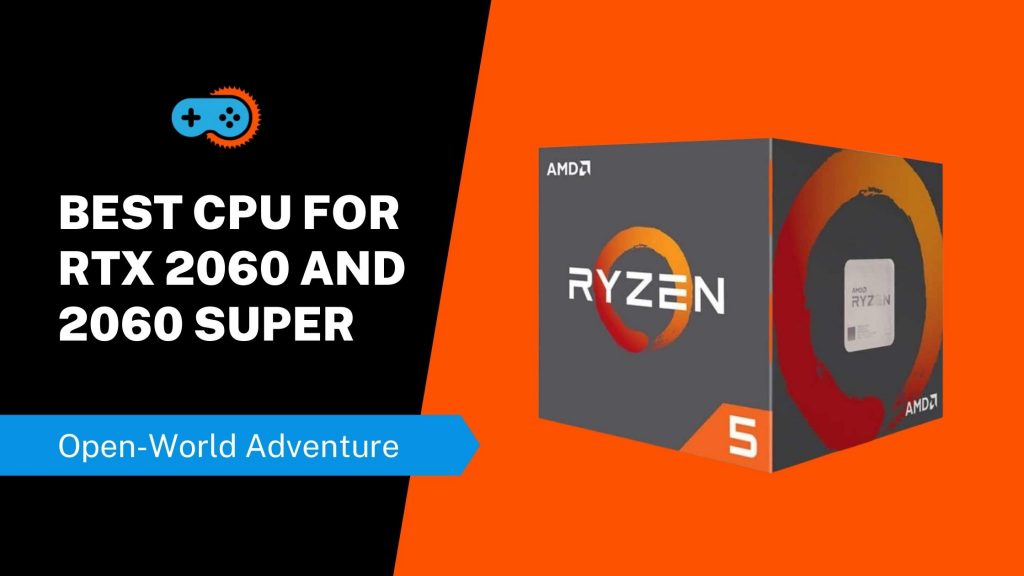 The Nvidia GeForce RTX 2060 is engineered to dominate 1080p gaming and bring you smooth framerates in open-world adventure and competitive games. Achieving ultra/max settings in games with 1080p is quite decent and playable.

Nowadays buying a GPU is more crucial for a future-proof smooth gaming experience. And there’s either GTX or RTX Turing Architecture GPUs which are brand new in the market.

One of the most common black-spot in a CPU is the bottleneck in a modern-age PC. Still, you don’t need a glorious Ryzen Threadripper CPU to rebel against all bottleneck factors which means every hardware must be able to fully communicate with each other under the equivalent amount of data bandwidth.

You can find the best CPU for RTX 2060 at a more reasonable price that provides excellent performance.

Best CPUs for RTX 2060 – Our Recommendations

So, here is the list of one of the best CPUs for RTX 2060 that you should buy for optimal performance without any bottleneck.

One of the newest released CPUs from Intel is the Intel Core i5-9400F and it is the cheapest six-core processor from Intel. This CPU has six cores and six threads. It is one the best CPU to pair up with the RTX 2060 GPU, especially if the value-to-price is considered because the Intel Core i5-9400F has a high-speed single-core performance, and it also comes with Turbo Boost Technology.

The Intel Core i5-9400F is not like the older generation locked Intel Core processors. It has a base clock speed of 2.9GHz. With the Turbo Boost Technology, the clock can go up to 4.1GHz, which will increase the performance in gaming significantly.

This CPU lacks an integrated graphics processor, but that is nothing to worry about as long as you are pairing it up with a GPU, especially a GPU like the RTX 2060 will be excellent. Intel Core i5-9400F beats the Ryzen 5 2nd gen processors without having any hyperthreading when it comes to gaming.

However, when it comes to multitasking and other intensive applications, the Ryzen processors are faster. So, if you just want gaming performance and want the maximum fps at a budget-friendly price then Intel Core i5-9400F is one of the best processors for RTX 2060.

Since the Ryzen CPUs launched back in 2017 and after the release of the 2nd generation, AMD has been very successful. AMD has managed to force gamers and enthusiasts to think twice when buying a new CPU.

AMD has managed to pull itself together, and now, AMD and Intel are in a head-to-head competition to compete for the top brand.

You should use an adequate motherboard for the AMD Ryzen 5 2600X processor to get all of the benefits from it. It does not have any integrated graphics, but that is not something to worry about because you can pair it up with a powerful GPU to get impressive performance, especially with the RTX 2060 GPU.

The AMD Ryzen 5 2600X processor is a deal-breaker as it has a base clock speed of 3.6 GHz and a boost clock speed of 4.2 GHz on all of the cores without going over 95 watts of power consumption.

AMD Ryzen 5 2600X CPU is one of the best processors for RTX 2060 as it provides excellent performance and is a budget-friendly option.

Furthermore, it is equipped with six cores and six threads, and it is also the latest 9th gen CPU that has the highest core clock (boost clock) ever observed in an Intel Core i5 processor.

Since the Intel Core i5-9600K CPU is an unlocked processor, so make sure that you pair it up with a motherboard that allows overclocking. Because if you don’t, then there will be some potential of the CPU going to waste.

The next CPU that you can get to pair up with the RTX 2060 is the AMD Ryzen 5 3600. It gives impressive and can handle almost every game at 1080p. It offers the best price-to-performance ratio out of all the Zen2 processors. It is equipped with 6 cores and 12 threads, which are more than enough for most of the new AAA titles today.

The AMD Ryzen 5 3600 is not the best when it comes to overclocking but it still does provide impressive performance. The CPU cooler that the Ryzen 5 3600 comes with is able to keep it cool for light overclocks but those who want super-high speeds should consider getting a larger air cooler or an AIO cooler.
It also uses the new AMD X570 chipset, which offers nice features. However, this CPU will run on any AM4 motherboard as long as the BIOS is up to date. Also, keep in mind that Ryzen runs a lot better with faster RAM, so try to get a memory kit that is at least 3000MHz.

The Intel Core i7-9700K is equipped with eight cores and eight threads because it does not have Hyper-Threading. It provides excellent performance in the modern AAA titles at very high clock rates.

It is a processor that is a recommendation for the users who are building a PC and have gaming in focus and do not expect titles to benefit from more than eight threads in the near future.

Since the Intel Core i7-9700K is an unlocked processor which means it can be overclocked. We recommend pairing it with a motherboard that allows for overclocking to get the most of the CPU.

It has eight cores and 16 threads at a mere 65 watts, which is extremely efficient and no less than amazing. It consumes very little power, but in return provides very high performance to the users.

When you pair up the AMD Ryzen 7 3700X CPU with the Nvidia GeForce RTX 2060 GPU, it will result in very high speed and performance. However, the performance may not be on part with the top CPUs that are available in the market, but for its price range, it does not disappoint at all.

The CPUs mentioned above are some of the best CPUs for Nvidia GeForce RTX 2060. All of the CPUs in the above list don’t have the bottleneck issue when paired up with the RTX 2060 GPU, and all of them will provide excellent performance.

The ideal CPU to pair up with RTX 2060 is the Intel Core i7-9700K for its absolutely amazing performance, especially in gaming. It is a little bit expensive, but it surely does not disappoint when it comes to gaming and performance.

After the Intel Core i7-9700K, the AMD Ryzen 7 3700X has the best performance when paired with the RTX 2060. It provides an overall amazing performance in gaming as well as in uplifting the daily-life usage experience. It also has a great price-to-performance ratio, so you will not be disappointed with the performance and will not have to pay as much as you would when buying an Intel processor.

Related Article: How to Choose a CPU

When talking about PC gaming, the term “bottleneck” will pop up every now and then. Technically, a bottleneck occurs when there is a restrictive element that is holding the performance that your PC should otherwise be able to achieve.

For example, if you have a powerful GPU but your CPU is weak then your computer will only be able to run as fast as the processor can go.

Not really. The GDDR6 can do well on a PCI-E 3.0 without causing a bottleneck.