AMD Ryzen 7 Vs Intel Core i7 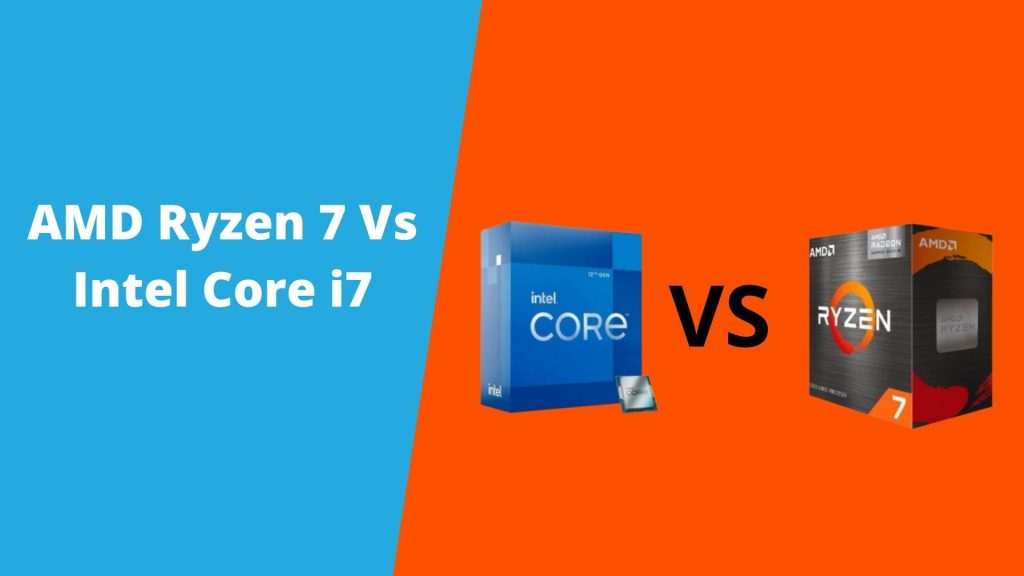 Gamers are well aware that when it comes to PC upgrades, the CPU is the most important factor to consider. Your computer processing unit must be of high quality because it is in charge of reading program instructions and acting upon instructions.

The AMD vs. Intel rivalry, like macOS vs. Windows, is one of the most heated discussions among PC enthusiasts, and in 2022, these two industry giants are more competitive than they’ve been in almost a decade.

We had high hopes for AMD’s Ryzen 7 series, which was introduced as a high-end unit for the avid gamer. After all, AMD has a reputation for making excellent processors. But how does it match up against the Intel Core i7, and which CPU family holds the secret to superior gaming performance?

Today, we’ll look at architecture, clock speeds, cores and threads, and multitasking capability to determine which series has the most to offer and where you should look for your next CPU upgrade.

First, it’s vital to understand what cores and threads represent in terms of CPU performance. The more the cores, the more programs you can run at the same time.

The Ryzen 7 CPUs feature double the amount of threads to cores, which are 8 cores and 16 threads per core across the series, thanks to AMD’s use of Simultaneous Multi-threading technology.

Multi-threading technology is utilized in Intel’s hyper-threading CPUs to enhance performance. The Core i7 series is still the less powerful of the two, with only 8 cores and 8 threads.

Although the Ryzen 9 has more cores and threads but the AMD’s Ryzen 7 CPUs are a substantial improvement over the previous models like the Ryzen 3, which only have four cores and the same number of threads.

The first round is won by AMD’s Ryzen 7 CPUs, which handily outperform Intel’s i7 series. While the number of cores has an impact on performance, gamers will benefit more from a higher single-core clock speed.

Don’t ignore the Intel Core i7 just yet, because it outperforms the Ryzen 7 in terms of higher frequency capability. Even at maximum boosted speeds, it outperforms AMD CPUs, which is important to understand if you’re wondering that overclocking will make a difference.

The Ryzen 7 CPUs are clocked at 3.6GHz/3.9GHz, which is higher than the base clock speed of the Ryzen 9 CPUs, as a result, there isn’t much of a distinction in frame rates between generations.

Overclocking allows it to be increased to 4.4GHz/4.5GHz and will make a difference for serious gamers, as the Ryzen 9 has a faster boost clock speed of 4.6GHz/4.7GHz.

With a base clock speed of 3.8GHz and the possibility to reach 5.1GHz with Intel’s Turbo Boost technology, the Intel i7 actually outperforms both the Ryzen 7 and 9 families in terms of performance. This obviously improves gaming frame rates, but does it compensate for the lowered thread count and horsepower?

While GPU-dependent games may not notice much of a difference, games like Far Cry 5 and Ashes of the Singularity demonstrate why higher frequency CPUs are superior in gaming. The Intel Core i7 outperformed the AMD Ryzen 7 in this round, therefore Intel takes the win.

Do you believe that architecture will be the deciding factor between CPUs? Let’s find out…

The latest generation of Ryzen 7 uses Zen3 architecture, which offers a significant improvement over previous CPUs in terms of clock speeds as well as increased cache size. The AM2 chipset also means that it is compatible with previous, current, and even future motherboards.

The Ice Lake architecture is used in the 10th generation of Intel Core i7 CPUs, which, like Ryzen 7, is a huge improvement over previous generations, which used the Nehalem 45nm microarchitecture instead. However, the Ryzen 7 outperforms with a bigger cache memory capacity.

Although both CPU families are capable of running the majority of high-end games without issue, Ryzen 7 stores more of the most frequently used commands in the cache memory so they can be loaded faster.

The number of threads on your CPU determines the ability to multitask. The higher the number of threads, the better the CPU will be at multitasking. It may not be the top priority for gamers, but it will be if you frequently have other programs running in the background.

AMD has long been the better choice for multitasking, and Ryzen 7 can comfortably handle running multiple programs in the background for gamers who love to simultaneously stream their favorite Twitch videos during a gaming session.

Not trying to say the Intel Core i7 doesn’t perform well, but the fewer threads can’t compete with the Ryzen 7 series, which has twice the amount and thus twice the multitasking capabilities.

The Ryzen 7 series has a relatively good run of holding the top rank in computer processing units because of the improvements made since the Ryzen 5 CPUs. That is until AMD debuted their Ryzen 3000 CPUs.

Intel’s Core i7 CPUs, which offer great multitasking and increased gaming performance, have also been climbing the rankings. They may not be nearly as strong as the i9 family’s ultimate monster CPUs, but they still have a lot to offer the passionate gamers at a lower price.

The Core i7 is the more expensive of the two families we looked at, so you’d expect it to dominate the Ryzen 7 series in every round. This may not be the case, as you can see.

Although these two families are quite equally matched, the AMD Ryzen 7 series of CPUs has a higher thread count, more cache memory, and better multitasking.

If you’re a hardcore gamer hunting for a CPU with a boost in speed and performance, you’ll want to consider one of the Ryzen 9 series CPUs, which are more expensive compared to the Ryzen 7 series.

To conclude, it relies entirely on what you want from your CPU, and you can finally find a great CPU for your gaming PC in either collection.