Cherry MX RED vs Brown: Which one wins? 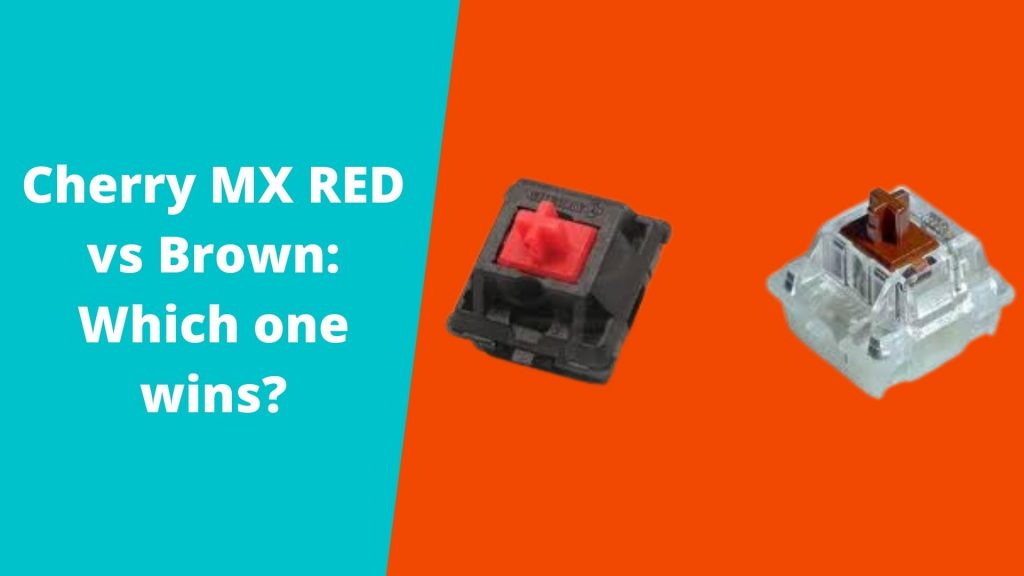 I have been a gamer for most of my life, and gaming keyboards are one of the first things I buy when upgrading my PC. The tactile feedback that they provide is addictive. Other people may not see the need for this, but it can make any game much more enjoyable. The same goes for office work. They don’t cost too much money either if you know where to look! I’ve tried out both Cherry MX Brown switches and RED switches and today we’re going to compare them head-to-head. So without further ado, let’s get started!

The actual difference between both keyboards lies in their build. As its name suggests, there is a membrane present beneath the keys that is in contact with the circuit. When you press a key, the membrane is what stimulates the function by impacting the circuit.

Instead of just a membrane, keys in mechanical keyboards have high-end mechanisms like levers and springs. The keys of this keyboard have a specific kick and sound. Instead of the membrane, the lever is what stimulates the desired function here.

Mechanical keyboards have tons of variations available. Each variation is named after a specific color and has distinct features.

In this article, we are going to do a comparison between two of many types. Keep reading to find out who wins the battle of Cherry MX brown vs Red.

What are Mechanical Switches?

Let’s take a peek at the technical side of mechanical switches. Spoiler alert! Loads of techy-ness ahead!

Mechanical switches are also called “mechanical contacts.” These durable parts usually consist of two or more pieces that make contact when pressed. They’re either a metal leaf spring or the switch housing itself.

When you press down on the keycap, these springs and/or contacts touch each other to complete an electric circuit by connecting conductive wires together. This closes an electrical connection that sends power from the keyboard’s controller board to your PC via a USB cable for recognition as a physical input button.

Most modern-day keyboards employ two main ways when using mechanical key mechanisms — tactile, or non-tactile (linear). The type you prefer is largely up to personal preference. Both offer their own unique feel to typing on but linear has fewer moving parts and is more durable over long periods.

A tactile mechanical switch will give the user a noticeable “bump” or “click” when they press it down. This makes for an overall easier feel to typing because you know exactly when your key has been pressed and can fully depress it with less error in comparison to non-tactile switches. This does make the keyboard louder, though!

Non-Tactile is a linear mechanism that doesn’t have any bumps. Instead, each keystroke moves straight down until it reaches the bottom without anything else happening along the way. Tactiles are considered better for gaming than linear types because of their soft and sensitive function.

There is another type of mechanical switch that is not so famous. These are called Clicky switches and are sensitive yet offer no feedback. They are extremely light to press and aren’t suitable for typing.

Why cherry MX switches are one of the most popular types of mechanical key switches?

Cherry MX switches are one of the most popular types of mechanical key switches in use today. They’re named after Cherry Corporation, a well-established manufacturer and innovator that introduced this switch type to the public market in 1981.

Cherry MX switches provide audible and tactile feedback when pressed in addition to a much higher actuation force than other types of keyboards. You will need, on average, 60cN to press one button down completely. A higher actuation force means higher recoil and higher feedback. As if this wasn’t enough, Cherry MX switches also guarantee 50 million operations. It is unparalleled in ease, longevity, and function.

To put things into perspective, dome key switches(membrane keyboard switches) require an average of 25cN or less for activation. This is because they use less physical space below the keycap(about 0.125 inches).

Over time, other sets of features were also added in these key switches like LED lights, programmable keys, and USB.

Cherry MX has a variety of switches that are divided and named after individual colors. Following is the graph explaining the characteristics of each type.

From all of the Cherry MX switches, the following two are used the most. We have done a comprehensive comparison of these two switches to make your shopping easier.

Cherry MX Red vs Brown! Which One is Best?

Both of these switches have their own strong and weak points. Cherry MX Red and Cherry MX brown are almost structurally similar, ALMOST! There is just a small difference.

Cherry MX brown comes with a little bump on every keystroke that prevents any erroneous and false touch. This feature comes extremely in handy when you are typing vigorously at the rate of 60 WPM.

On the other hand, Cherry MX Red provides no such feature. Its keystrokes are completely smooth and sensitive.

Now, a small bump might not seem like that big of a difference but believe me, it is. Below, we have explained how this seemingly small bump can impact your keyboard user experience to such a massive level.

Both of these switches belong to different classes. One is tactile(Brown) while the other one is Red(Linear). So it is only logical that their “feel” will differ a lot.

Since the brown one offers a little bump, it requires a little more actuation force(55cN). So, the keystrokes may feel a little bit tense.

On the other hand, Cherry MX Red offers smooth usage. The actuation force, in this case, is 45 cN which is one of the lowest of all Cherry MX switches. Keystrokes are pretty sensitive and you won’t have to put much stress to register a keystroke. This can be both good or bad depending upon the user and situation.

The feel of these switches also depends upon the weight of the springs. Cherry MX Brown contains relatively heavier springs. The heavier the springs, the higher the stress will be needed to press the specific key. This is another reason why Cherry MX brown appears to be a bit stiff.

However, the story is completely opposite in the case of Cherry MX red. Its springs are relatively lighter and require less amount of stress to actuate the function.

Key Travel is the term used to define the minimum distance descended by the key in order to register the keystroke. Gamers and typers alike like to have as minimum key travel as possible.

Both Cherry MX red and brown have the same key travel. They only differ in their structures. The value of both of their key travel is 2mm which is commendable.

Feedback is the main reason why most of us switched to the mechanical keyboard from membrane keyboards. But still, there are some who like their typing experience utterly smooth.

There is a massive difference between these two switches in terms of feedback. Since Cherry MX red belongs to the Linear lineage of the MX switches, it offers zero feedback. Its keys are so sensitive and smooth that you won’t feel a thing.

But Cherry MX brown is a completely different breed. Their feedback isn’t a bang but it is still noticeable. Cherry MX brown has one of the lowest and sensitive feedback. It is best suited for those that are irritated by the clinking sound of keys yet need to know whether their keystroke is actuated or not. It provides you with the best of both worlds.

Sound is one of the most desirable aspects of a keyboard by gamers. The clinking of the keys adds to the adrenaline rush of an intense game.

However, not everyone has the same preferences. But worry not, we have brought good news for both of the groups.

Neither of the above switches can be considered loud. MX switch Red provides a completely silent experience. You won’t be able to hear or feel your keystrokes. This can be both good or bad depending upon the person.

However, MX Switch Brown is somewhat louder. It isn’t absolutely one of those screeching key switches like MX blue, but it is moderately loud. This is largely due to the presence of a bump in MX brown. This bump and heavy spring give rise to vibrations that in turn produce sound.

Now, we will consider different scenarios and judge which one of the above works well. This will give you a more realistic and conclusive notion of which one is better.

While gaming, you will have to switch several keys at the same time. Your (character’s) life literally depends upon it. So you want a keyboard that offers zero resistance and you can press the key with the slightest touch.

In this case, the last thing you will need is a tactile bump. The presence of a tactile bump makes the Cherry MX brown relatively stiff. Registering the keystroke could be a little hard. In a cutthroat battle, one missed keystroke can be lethal.

That’s why we have chosen Cherry MX Red as a winner in the gaming category. They offer zero resistance and your gaming experience will be as smooth as butter.

If we are talking about typing, precision matters the most. You need to be completely in control of every keystroke. In gaming, a few missed/wrong keystrokes won’t impact you in any way. But in typing, nothing can be more loathsome than coming back and editing after every line you write.

This is why Cherry MX brown is the absolute king when it comes to typing. Its tactile bump will let you know if you have registered a missed/wrong keystroke.

Also, if you are working in a quiet office, it can be awkward if your typing can be heard in every corner. That’s why Cherry MX brown is the best choice for typing. It is one of the key switches that have the faintest sound. In this way, you can kill two birds with a single stone.

Which switch is best for you? That’s a tough question. One thing to keep in mind though is when deciding which type of mechanical key switches are right for your keyboard, different types have different typing and gaming styles.

The Brown keys from Cherry MX keyboards offer more resistance than the Red ones. So while the brown may not be as satisfying during heavy typists’ sessions, they are perfect for gamers who want an increased feeling of control over their characters with every press. In short words, it depends upon your preferences!

Hey! My name is Mohammad and I am a professional tech reviewer. I have been writing about games, tech and other related stuff for over 3 years. Finding information about high-end tech and educating the masses about it, exhilarates me