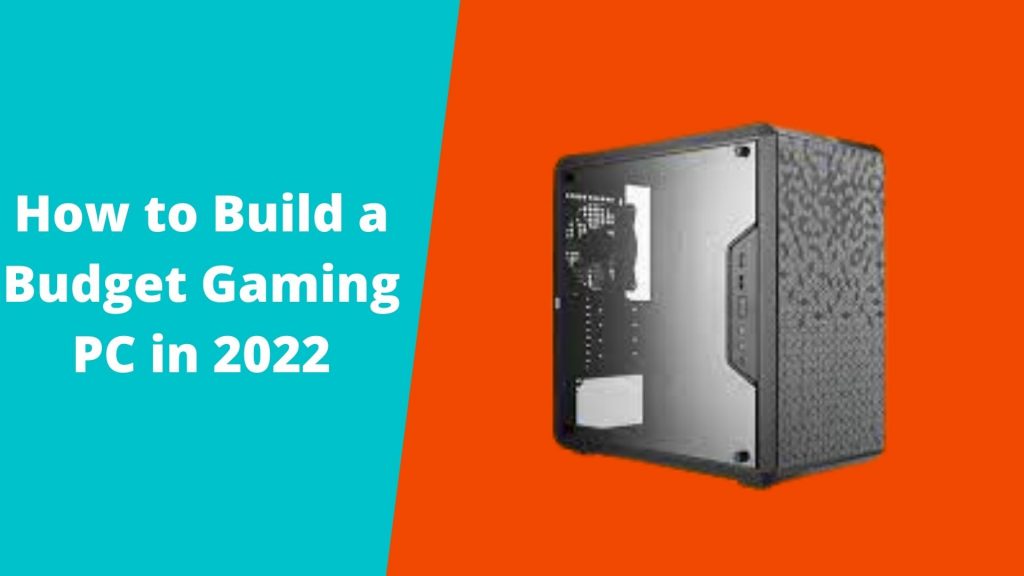 I personally went through countless ordeals because I wasn’t well-versed about what sort of components I would need for my PC. On top of that, I was scammed twice. I don’t want anyone to go through the same experience, and that’s the reason why, today, I will be shedding light on the most questionable procedure “how to build a budget gaming pc.”

For that, you would need to stay with me throughout the guidelines as I will try my level best to pitch in probable inclusions and exclusions, what things to look for in a build, and what budget a person should allot for today’s gaming standards.

Each day you come across a new gaming entry, and that’s because of the dynamic environment development brings in. For instance, if you consider Assassin’s Creed Valhalla, then you’ll know that a minimum of 6GB of VRAM is required. If you are targeting such games-Triple A titles-then what you have to do is allow a little more budget.

Probably, it significantly differs for every title. For example, if you target games such as Star Wars Jedi: The fallen order, you’ll be fine with a 4GB VRAM and Intel core i5 6th generation processor. On top of that, around 8GB of RAM is a must for every game. These are not the times where your pc will be functioning on 4GB or 6GB RAM.

You need to increase the threshold to at least 8 Gigs of RAM. Other than that, a decent amount of storage will suffice as we are targeting a budget-friendly gaming pc build. For that, make sure that you get at least 1TB of storage (HDD).

To make the selection criterion more feasible and credible, you can use sites like Game-Debate and Wikipedia to know in-depth about the individual requirements of applications and games.

An Insight into the World of Hardware

Other than that, you need to look at the dissection formula of each Hardware. For instance, when CPUs are concerned, you need to consider:

Physical Cores: The number of physical cores indicates how frequently your processor will be tending to the task. The higher the scores, the better the performance. But for a budget-friendly system, any processor with four cores will suffice.

Clock Speed: It’s the measure of your processor’s speed. For example, 3.0 GHz indicates 3000000000 clock cycles per second. This correlates to the number of operations done by your system per second. I would recommend selecting those processors with decent clock speed.

Overclocking: Well, if you are rooting for Intel processors, then the processors with the “K” version will only allow you to overclock. Hence, budget-friendly processors like Ryzen 5 3600 are more preferred.

Graphics card is the heart of your gaming pc build. For this budget-friendly gaming pc build, I would recommend you to look between GTX 700 to 900 series-especially GTX 750 Ti, which will give you an edge over other GPUs. As far as the AMD GPUs are concerned, you can select any GPU as long as it has an R9 lineage.

What things to consider when buying a cheap GPU?

VRAM: It all boils down to the available VRAM for your GPU. You can’t expect a 512MB VRAM to run games like GTA 5 or any other game that surpasses the average threshold boundary. For this, you need to ensure that you at least get a GPU with 2GB VRAM, as it will be enough to run games at low settings.

Brand: Well, Brand plays a pivotal role in determining how performative your budget-friendly gaming pc build will be. I would personally choose AMD on any day of the week because of the price to performance ratio. AMD GPUs have been to surpass Nvidia in many aspects, and that’s the tea.

FPS Generation: The generated Frames rate per second entirely depends on the type of GPU you will have. Always make sure not to buy those GPUs which will only be able to produce the bare minimum of 30FPS. No one loves playing games with delay. If the FPS generation is too low, then it’s time to get hold of a better GPU.

It goes without saying that motherboards are a pivotal component of your gaming system. Without them, your system is nothing. Motherboards are like a vessel; hence, you must postmortem every possible aspect of it to get the best results.

CPU Socket: The foremost thing you should be doing is to gather enough information about what socket you want for your components. If you plan to buy an AMD processor, you would need a completely different CPU socket. As far as the intel is concerned, LGA 1150, H81, and H97 chipsets would work all fine. You can’t use an AMD chipset on a CPU socket that supports Intel processors.

Form Factor: The majority of the buyers ignore this. For the love of GOD, don’t do it. Form factors are as crucial as cherry-picking a compatible CPU socket. Imagine slotting in an ATX motherboard in an ITX casing.

Chipset: Here’s another thing. With each successive Intel Core-i and Ryzen lineage, you would need to upgrade your motherboard. You possibly can’t use Intel Core i7 on a motherboard with an outdated CPU socket. That’s plausible, right? So, always look for the correct Chipset version.

RAM plays a crucial role in determining the overall speed of your gaming pc build. For instance, the higher the RAM data rate (DDR4, DDR3), the better the execution of temporary storage will be.

Not to mention, Memory capacity also withholds enough power. You can’t possibly play games like Call of Duty Warzone with 4GB of RAM. The game minimally requires around 12GB of RAM. Well, I would say, for a budget gaming pc build, 8GB of RAM is completely acceptable. But again, it entirely depends on you.

Two more important things are the CAS latency and the frequency of the RAM. As long as the frequency of the RAM remains higher, you are in good hands. For example, 2666MHz RAM will be more efficient than the one with a 1066MHz frequency. On top of that, you also need to ensure that the RAM’s CAS latency remains at bay. As long as the number is low, you are in good hands.

Well, I have come across countless people who were victims of such ticking time bombs. PSU is no different if you are planning to cheap out on the brand and quality. I’m not trying to be condescending, but people need to up their analyzing skills.

If you are building a budget-friendly gaming pc build, then you still need to get a high-quality PSU, nonetheless. It doesn’t matter if it costs you 100 bucks; just get it. PSUs are the heart of your systems; it’s always better to spend more on them rather than letting them die over a span of two weeks.

What you can do is select a decent Corsair or Antec PSU rating of 500W to 750W. Anything in the range will suffice your needs.

Also, I would recommend having a look at your PSU tier list to know more in-depth about what certification is and what sort of efficiency will serve you well.

Last but not least, always ensure to use an online calculator to find the overall TDP of all the components. That will give you enough intuition as to what sort of PSU you want at the end of the day.

There’s no concrete way of selecting storage devices. But I would say to check more on what sort of magnetic recording (SMR and CMR) your hard drives use. For instance, you shouldn’t buy 2TB Seagate’s HDD because they majorly embed SMR techniques in their drives.

Anyways, always check for health and power-on hours before finalizing any HDD. Apart from this, it’s better to buy a 128GB SSD for just installing Windows. This way, you won’t be spending too much and will also be able to have faster boot/load times.

Last but not least, it’s always better to have a look at the RPM (revolutions per minute) of drives since they allow you to know how quicker read/write speeds will be.

I would say since we are targeting budget gaming Pc, then any decent and non-flashy case would suffice. But before buying any case, you need to ensure that it has enough room for slotting in all the components, will fix in the motherboard, and have enough ventilation space, so the temperatures remain at bay.

If all these criteria are fulfilled, then bingo, that’s your dream case.

This section is only for those who do not have peripheral devices and monitors. If you are not one of them, you may skip this session. Anyways, these other components do not exactly account for the total budget. Usually, planning includes the individual components inside the casing. That’s all. If you have enough money to sustain more components like Mouse and keyboard, then sure go ahead.

Otherwise, you can rely on membrane keyboards rather than on mechanical keyboards when considering a budget-friendly system. Also, a decent 1080p 60Hz monitor will suffice your needs, no need to be extravagant when you know you are low on budget.

Assembling all the parts

First things first, you need to ensure that you have all the components available at your disposal. When you are done assigning them their dedicated slots, you are good to go. Before that, I would love to mention that it’s always better to have a look at manuals since they give detailed guidelines about how to fix an XYZ component.

Always make sure that you handle the fragile components with care, especially processors. Once you are done assembling all the parts in your system, it’s time to launch your first budget-friendly gaming system.

I hope you are successful! Do let me know in the comment session about how you tackled all the hurdles when slotting in all the components.