How Much does it Cost to Build a Gaming PC 2023 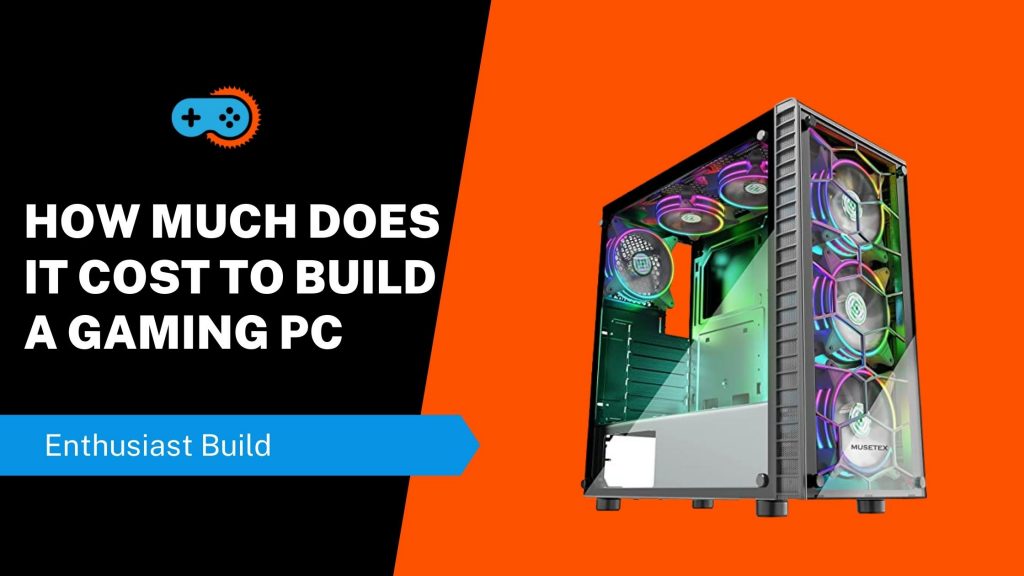 Are you tired of prebuilt setups? How could you not be! We all have been there, you know. The sellers coerce us into buying prebuilt PCs which are restricted by time and effort. Within a year or so, the PC dies out, and then the loop continues. To break this wheel, I have brought to you something so pivotal that it will save you from the hassle of constantly buying new PCs. Yes, the ultimate answer to the question “how much does it cost to build a pc for gaming?” The short answer could be anywhere between $300 to $2000. It entirely depends on the selected components and the price tag they entail.

It goes without saying that building a PC from scratch can be daunting and excessively time-consuming when one has to learn all the nuances and rules for perfect PC making. But, hear me out! You will be future-proofing your PC for at least a good three years if you are able to build a PC from scratch. Why? What’s so special about building it yourself? Well, number one, when you are building a PC yourself, you consider all the features of a component. You try to match the specifications against a myriad of products. See, you are investing your time into self-learning, and what you get in return? -A perfect flawless PC that can withstand years of usage!

I really don’t mean to avoid pre-built rigs like a plague. You know, at times, they are fine and completely appreciable, but other times, they are not. It’s because of the limited number of products available at a vendor. They might force you to buy off an i5 7th generation processor and pair it with GTX 1060 3GB. This might lead to a bottleneck, which means the performance will be greatly restricted due to the unmatched component requirement. See, this is why you should be building a custom pc build from scratch to save yourself from this horrendous reality of not being able to do anything about bottlenecks.

A PC comprises a lot of components, in which the foundation is a motherboard. On the MOBO, you slot different products like GPU, CPU, fans, hard drives, SSDs, RAM modules, WIFI card, etc. But what’s the catch? Why am I enlisting all these components? Well, the reason behind doing so is nothing but to spread awareness regarding the cross-compatibility between the components. You really can’t use Intel Core i9 10900K with GT 730 GPU, can you?

So, when the question arises of how much does it cost to build a decent gaming Pc, there’s no straightforward answer to it. For you, it might cost $2000 because all the components are high-end, whereas, for another, everything might easily befit within the range of $300. It’s very personal and user-dependent.

It’s a traditional saying, “CPU is the brain of a computer”, and it’s 100% accurate because the CPU allows you to communicate TO and FRO with the applications and hardware alike. Now, let’s say there’s a CPU with a lowered computation power. What do you think will happen? The run time of the applications and the communication between the components will be slower. For that, you need to select a processor that’s either quad-core, hexa-core, or octa-core. With the new AMD threadripper series, you can get a core count of 24, but such processors are not recommended for gaming; hence it’s better to select a processor that lies at the middle of the spectrum.

A GPU complements a processor because both of them are required to run games and applications. As you climb up the stairs, you’ll notice that the price tag of GPUs skyrockets because either they are offering a humongous amount of VRAM, or they are from a reputable brand. Whatever may be the reason, you need to be very well aware of the fact that GPU has to be as par the computation power of the processor. Anything below or higher will simply lead to bottlenecks. I would recommend spending around $200-$500 on a GPU from the middle-tier. Anything higher than this should be at your own discretion.

Here you might need to compromise on your budget. Number one, if both the CPU and GPU are from the high-end spectrum, then automatically, the motherboard would be expensive as well. Otherwise, anything below $200 would be sufficient. But let me tell you a thing. The motherboard is a vital component that houses all the components. Without it, you really can’t make a PC, especially a resounding gaming PC. Hence, you need to ensure that your motherboard has all types of features such as Bluetooth and WIFI support, M.2 and NVMe slots, and USB gen XYZ slots.

Also, VRM (voltage regulator) should be top-notch because most products don’t have a decent VRM, which turns out to be a bummer for those looking forward to overclocking their CPU and GPU.

I wouldn’t recommend buying traditional hard drives because they are noisy and have slower transfer rates. Instead, you should turn your gaze toward SSDs and NVMe, which are a lot faster than conventional storage devices. Not to mention, SSDs are preferred for faster boot and load times; hence, it’s better to get a 120GB SSD for just installing windows and storing important applications. For storing games, you can use HDDs because SSDs are brutally expensive.

For gaming, you can go for 16 gigs of RAM, and it’s more than enough. A decent kit will cost you around $90, so keep the budget accordingly. As far as the importance of RAM is concerned, it’s a must requirement to store data temporarily. The CPU and GPU transact data from the RAM to constantly update the game on your screen. It doesn’t necessarily have to be a game. Any application will do the same.

Believe me when I say I have seen people’s PCs burn down to cinders just because they used a local PSU. Not many people research when selecting a power supply. You need to understand that your motherboard is powered on through a PSU. If you are buying a faulty PSU, then there would be voltage spikes. This anomaly can damage your motherboard, so always choose a PSU from a reputable brand (80+ power efficiency is a must/bare minimum).

Also, I would advise you to set a budget of around $100-150 for a highly efficient PSU.

When you are done buying all of the major components, now is the time to have a look at a good PC case. Well, there’s no particular range, as the price tag depends on the form factor you are going for. If your motherboard has a form factor of micro-ATX, then it’s suitable to find a PC case with the same form factor. So, maybe a budget of around $100 for a PC case. Apart from this, make sure that your case can support fans and have an insurmountable airflow. As long as there’s airflow, the temperature of your components will remain below the maximum threshold.

Price enlisting for these major components

Other components to consider

This definitely brings the article to a wonderful end. I believe I have enumerated all the possible required components for building a decent gaming PC. But if you think there’s something missing, do let us know in the comment session. Before departing, I want to recommend some of the budget-friendly, and top-tier builds for you. So, do check them out:

The initial stage of looking out for information is what seems to be the only complex thing. Because if you are a first-time builder, then getting familiar with the specifications and jargon can throw you off guard. Apart from this, there’s nothing that can account for “Tough”. So, yeah, just get familiar with the realm of PC hardware, and you are good to go.

Research is the key to getting the best out of your gaming PC build. Hence, it can take months and even years (at times) for finding the right component for your PC. Not to mention, the majority of the low-budget users wait for the prices to drop down, so it can add up to the time frame.

Nothing much! All you need is a PC case and familiarity with it and a screwdriver for screwing your components (pun intended). That’s pretty much all you need. Apart from this, you might need to apply the thermal paste before slotting the CPU and GPU for reducing the temperatures.