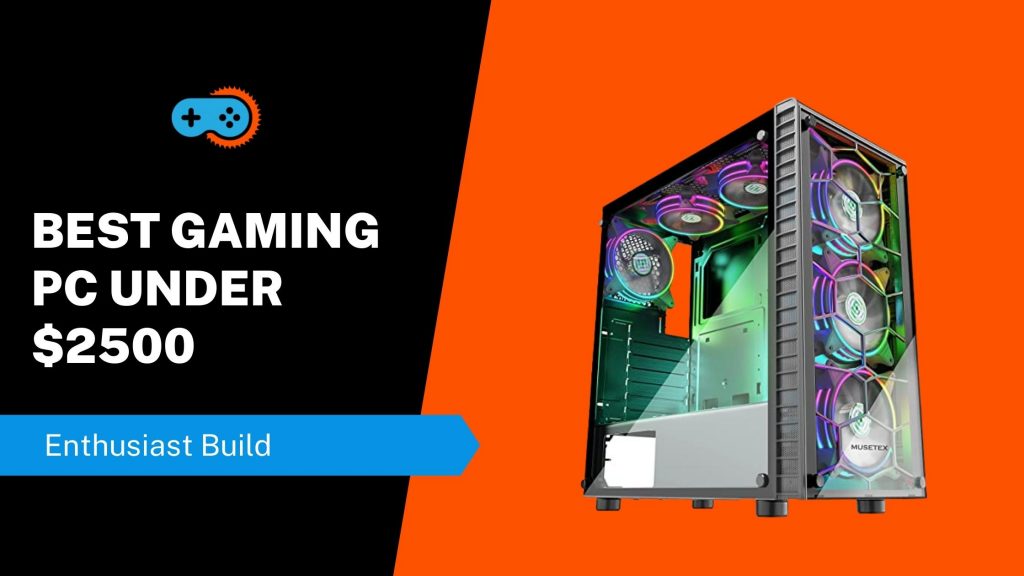 The best PCs are the ones that are put together with one’s own hands. Yes, you got it right, it is always recommended to build your own PC rather than getting a pre-built one and the reasons are many.
Custom build PCs are exactly according to your preference and are less pricey as compared to the prebuilt ones even with exact same specifications.

When we are building a gaming PC for $2500, we surely don’t want to compromise on the CPU as it is the core element for better gaming performance. And for this purpose, I decided to choose an Intel Core i9 10850K, a truly outstanding Intel processor for gaming!

I won’t say this is the best one out there, but if you are an Intel freak, this is surely one of the best gaming CPUs from Intel. Moreover, do keep in mind, its performance is almost the same as the 10900K but at a lower price and becomes a better option for gaming enthusiasts.

What’s the point of building a $2500 gaming PC when there isn’t a top-quality graphics card? Therefore, I decided to go all out on a budget with 2080Ti because a graphics card can make or break the deal for a gaming PC. The 2080Ti will cover you for a 1440p high refresh rate, 4K in the ultra, and all other related details without breaking.

The prebuilt PCs come with all the good specs but not the motherboard. Manufacturers mostly use a low-end motherboard, which can halt the reliability and durability of the CPU. Therefore, one of the biggest advantages of building your own PC is that you can add in a high-end motherboard and have a great gaming experience.
I would recommend the Gigabyte Z390 AORUS ultra motherboard for this PC build as its IO and other features beat the other competitors, VRMs are amazing, and it allows to easily overclock the Intel Core i9 10850K. If you are willing to spend $2500 on a PC build, your PC definitely deserves the performance, look, and feel of Gigabyte Z390 AORUS Ultra.

It’s not a brainer that Gaming PCs run hot easily. Therefore, they need a good cooling setup to keep everything balanced. I rarely think of any other brand other than Noctua when it comes to air cooling solutions, mainly because they are best at what they claim.

The latest Noctua NH-U12A has been our editors’ best choice since the day it launched. It offers outstanding cooling performance while not making noises like a tractor. Also, this CPU cooler is very easy to install! One more thing that had us impressed is the Noctua six-year warranty.

For the best gaming PC build under 2500 dollars, we have decided to use Samsung 970 Evo due to its speed and high transfer rate. It helps in booting up the OS in seconds alongside processing and loading the software and games in a blink of an eye.

In addition, it will take your gaming experience to the next level as there will be a fast loading time and a good amount of capacity for the game library.

However, if you ever feel like running low on capacity, you can always throw in some more SSD according to your preference and needs. But, for the speed and ample storage, you’re in the safe zone with the Samsung 970 Evo Plus.

Dual-channel memory is always better than one! And, even the cheaper builds these days have a dual-channel memory so there is no point in having a single one in a PC worth $2500. I suggest getting this G-Skill Ripjaws 32GB (2 x 16GB) DDR4 RAM as this is completely compatible with Intel processors.

Also, this RAM is one of the personally tried and tested components for gaming, and trust me when I say it gives a whole new level of smooth gameplay, I mean it. Also, it is quite stable during rendering as well.

For a PC Case, my recommendations always involve something that is roomy and has a good airflow setup as gaming PCs do run hot quite too much. And, hands down, I have never come across a better option than Fractal Design Meshify C. It comes with one of the best airflow setups as it’s made of mesh. Don’t worry; the mesh doesn’t feel or look cheap; rather, it looks premium and eye-catching when placed on a computer desk.

Also, this PC Case can fit in all your essential and miscellaneous hardware, including water cooling or custom tubing, thanks to the huge space! It can even fit 240mm radiators.

The bad power supply is the first thing that made us switch from pre-builds to building a custom gaming PC. Therefore, we surely won’t skimp on this one! For PSU, you can’t go wrong with EVGA Supernova 750 G3. It is highly compatible with our recommended CPU (Intel Core i9 10850k).

Moreover, you’ll be impressed by the quality of cables, full modularity, and of course, EVGA’s official warranty. So, now say goodbye to poor power supplies with this top-of-the-line PSU for Intel i9 Processors.

When it comes to CPU, you should aim for getting the best of the best in the given budget (never compromise on CPU!). For gaming, the perfect choice will be Intel Core i7-i9 or AMD Ryzen, depending on your preference and usage. If you ask for my recommendations, go for the Latest Intel Core i7 for the best gaming performance or if you are an AMD enthusiast, get the Ryzen 9 3900X. You surely won’t regret these purchases.

No matter how amazing your gaming CPU is, if you don’t have a fairly equivalent graphics card, it’s never going to be a perfect gaming PC. If you have a budget, go for the best consumer GPU available in the market, that is Nvidia RTX 2080Ti. Though I have my eyes on the new Nvidia RTX 3090, it is a little on the expensive side.
Anyways, RTX 2080Ti has the best performance to value ratio and I am pretty sure no other graphics card can beat its performance. If you are a beginner and looking for a less expensive variant, go for Nvidia GTX 1660 Ti.

No matter what your hardware specifications are for a gaming PC, you’ll surely be needing a CPU Cooler to keep your PC away from all the thermal issues. Gaming PCs run hot easily and if these heating issues are not catered properly, you’ll surely be in big trouble. Therefore, go for a CPU Cooler that gets the job done pretty well while also not taking up a lot of space in your PC case. My always go-to brand for CPU Coolers is Noctua, do check out their coolers and decide according to your need!

When building a PC worth $2500, you’ll surely don’t want to corner Memory and Storage after getting such a good CPU and GPU. For Memory, you’ll be needing 2 x 16GB of fast 3200MHz. This Memory will be sufficient for all your gaming, multitasking, and browsing needs or if you want a workstation for rendering and production. Also, a dual-channel memory is always a better option than a single!

Go for a dual setup for Memory as well! Get a separate boot drive with class consistency and sustained speed; as we mentioned in our build, Samsung 970 Evo Plus is a very good option available in the market or you can go for similar variants as well.

For capacity, the sky’s the limit! I would suggest going for a 500GB SSD but if you want to build a bigger gaming library, you can decide whether you want 1TB or 2TB. Whatever you choose, do keep in mind the rule of thumb, SSD over HDD!

Go for a PC case that has the best airflow as you’ll surely be needing that with a gaming PC. Also, not to forget, the PC Case should be roomy enough to accommodate all your hardware components, including water cooling and large radiators. When going for PC Case shopping, look for a mesh design case.

Not everyone wants to build or customize their own PC. There can be many reasons; maybe you don’t want to get into the technicalities of connecting hardware, you want to get a PC quickly, or maybe it’s just a personal preference. Whatever your reason is, you can always shop for a prebuilt gaming PC as there are tons of options available out there.

Here are two of the most liked to pre-built gaming PCs under $2500:

Alienware is a very renowned name in gaming PCs, mainly because of its unique aesthetics. However, aesthetics are not the dealmaker for everyone. But, Alienware R11 holds the ground with its undeniably outstanding features.

Inside the beautiful and compact chassis of Alienware R11, it houses Intel Core i7-10700F paired with Nvidia GeForce RTX 2060, the perfect combo for smooth gameplay. This gaming PC comes in various configurations so there’s little room for options and preferences. It is a little on the pricey side but still under the $2500 budget.

Not to forget, the Alienware R11 features 32GB RAM along with a 1TB SSD and 2TB HDD. These specifications will help you make a huge gaming library while not compromising on the lag-free gaming experience.

Undoubtedly, the first pick was Alienware R11; all credit goes to the new Intel CPU lineup. But, the second on our recommendation list also belongs to Alienware because no one can do better than Alienware when it comes to gaming PCs. It is for the ones who are into AMD processors rather than Intel ones.

The Alienware R10 accommodates AMD Ryzen 7 3700X under the attractive black chassis. This chip is not only good for day-to-day productivity tasks but for gaming as well (duh! That’s the whole point). It is very much comparable to Intel Core i7, though.

Moreover, the Graphics Card also belongs to AMD and makes this PC a true gaming one. Not to forget the 16GB RAM is pretty much enough for multitasking and taking care of the majority of work. Though I would have enjoyed it more if there was a little room for upgrading, sadly, the design of the chassis doesn’t allow that. Anyways, as a first machine, Alienware R10 is not a bad option at all!

There is no exact figure when it comes to building a PC. You can build a PC for as low as $800. However, if you want to run high-end games (AAA titles), you’ll be needing specs according to that. A high-end PC would cost you somewhere around $1500 – $2500, depending on what hardware you are going to throw in.

When it comes to price, building a custom PC is much cheaper and more rewarding than a prebuilt PC. Also, you can add hardware and other specifications according to your usage and preference. While on the other hand, even though the prebuilt PC is expensive, it is an easier and quicker option.

Prebuilt PCs come with a bad power supply and poor quality build. Even though you can easily find the latest and robust CPUs and GPUs in prebuilt PCs, the presence of a single cooling fan, poor quality of power supply (PSU), and an average motherboard will surely make your experience dull.

No, unfortunately, we don’t sponsor and nothing is sponsored here either. Our site’s thriving on the commissions based on the Amazon affiliate program, so yeah.