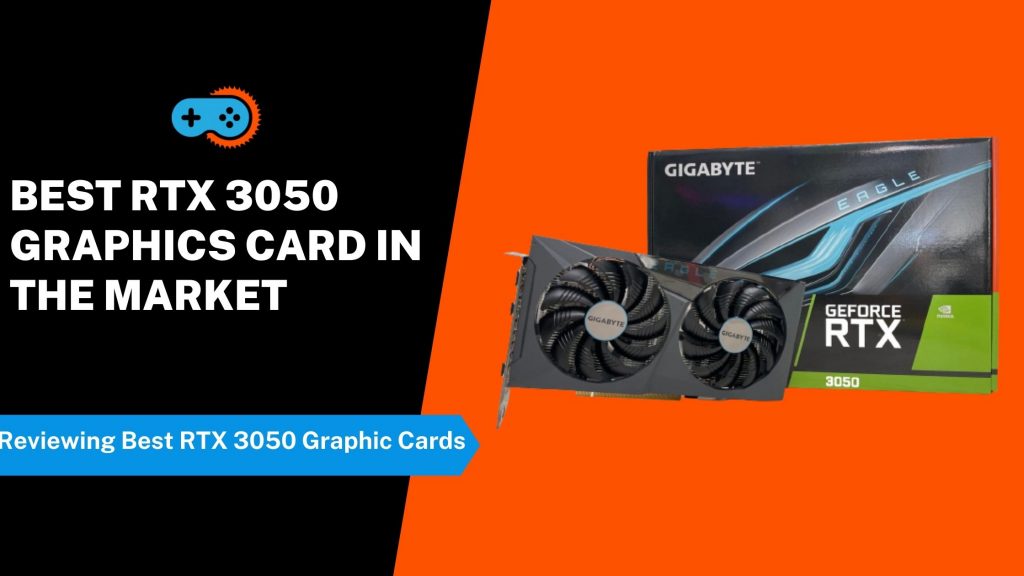 The RTX 3000 series by Nvidia ended up to be one of the best in terms of performance and value. Sure, the GPU shortage came in the way and ruined a lot of things for a lot of people but with the GPU supply becoming steady slowly, a lot of people are gearing up to get their hands on the RTX 3000 series and with Nvidia releasing the RTX 3050, this is a great time to jump the bandwagon.

For those who are not aware, the RTX 3050 is better than most of the competition at the same price and has performance that is much closer to the RTX 2060, which served as a great card. This time around, you are not spending a lot of money. Therefore, it is only valid that we go ahead and figure out the best RTX 3050 graphics card because after all, performance is something that we do want.

So, let’s not waste time and start exploring some of the best options that are available.

Now, when you are talking about finding the right RTX 3050 graphics card, the process is not at all complicated. As a matter of fact, it is the opposite as you can easily find some excellent offerings in the market without running into too many issues.

Still, we are going to help you find the best GPU that you can and that too, without spending all your money. So, let’s not waste more time and have a look.

When you are talking about top of the line graphic cards, the one company that has always been in the front is Asus. They have developed some excellent GPUs over the past couple of years and have continued this trend, as well. If you are looking for performance, you would be happy to know that you cannot get things better than Asus and that is what makes this company so good in terms of their overall fan following and commitment.

It is safe to say that in terms of specs, the ROG Strix GeForce RTX 3050 OC is not at all something that holds back and you would be glad to know that the level of specs that you are getting does translate into the overall performance as far since this GPU is an absolute performer.

For those wondering, this is made primarily for 1080p and 1440p gaming and the performance remains excellent through and through. What is even better is the fact that you are looking at one of the best build qualities and design.

The GPU is excellent when it comes to factory overclocking as it boosts up to 1890 MHz, however, the real world numbers are higher all thanks to GPU boosts being one reliable tool.  The card does bring a 2.7 slot design so fitting it in smaller cases would be difficult and it is also a longer card at 300mm but all of it translates into one of the best built variants of the RTX 3050 I have seen.

The RGB personalization is just as good as the higher end models that you can see in the market and the thermal performance is also amazing. So, if you are getting this card with the thought that you want it to run as stable and as cool as possible, then this is the right pick without a doubt.

My only concern with this card is its massive design but aside from that you are not really going to run into any problems.

Overall, the ROG Strix GeForce RTX 3050 OC is an excellent offering from Asus that delivers top of the line performance and even though there is a premium on the price, you are not going to regret it. 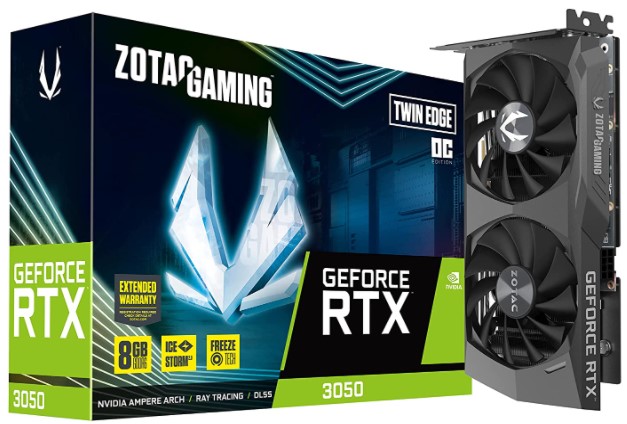 When you are talking about good companies that are known for some amazing GPUs, Zotac is one name that is always there. The company is known for making some amazing GPUs for those who are looking for something. The GPUs that are provided by Zotac are available in both standard variants and higher end, overclocked variations, too and there is plenty to choose from, so you are in luck.

Now, in terms of the overall specs and everything else, it is safe to say that the RTX 3050 by Zotac is not all there. However, the core specs remain the same. Thankfully, the company did not skip on focusing on the build quality as the RTX 3050 Twin Edge remains to be one of the better built cards in the market, and I am glad that Zotac has done a great job overall.

With that said, you are also getting the option to choose from both overclocked and non-overclocked variations with plenty of room to overclock manually, too. So, if you do want that, you can have that feature with ease.

Moving further, the GPU also brings an excellent heatsink design that lets you use the GPU to its full potential and in my testing, the GPU easily boosted beyond the advertised clock, which is all thanks to the amazing GPU boost.

After spending some time with the RTX 3050 Twin Edge OC, I really did not run into any issues aside from the fact that the GPU does not perform as well as some of the other RTX 3050 variants in the market. If you are okay with it, then the GPU is a solid offering.

Overall, this specific version of the RTX 3050 comes as a great variant. Sure, the performance might be a bit lacking as compared to some of the other variants but it never feels like a bad thing because at 1080p, you are still getting great results. 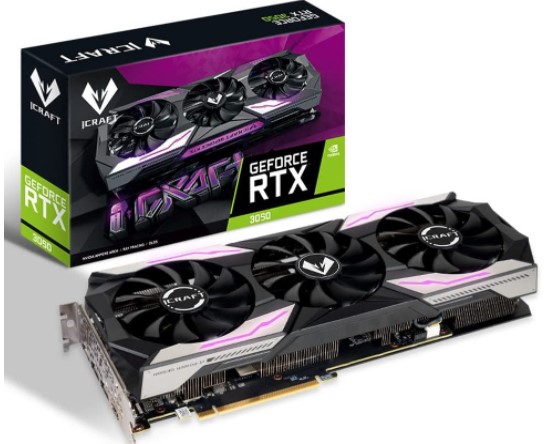 iGame is one of the brands that has come a long, long way when you are talking about GPUs. The company went through a humble start but is now considered to be one of the best in the business and the performance is never something that they are known to sacrifice. If you are in the market looking for something truly unique, we can guarantee that iGame is the company to provide you with that.

You can tell from the specs that the iGame GeForce RTX 3050 Ultra is not messing around as it means business and that certainly is a good thing for anyone who wants performance. However, performance is not just the only thing it offers as this is perhaps one of the best looking RTX 3050 available in the market, and although I do understand that the looks are not going to win any awards, if you want some serious horsepower, that is also there.

The GPU comes overclocked out of the factory and delivers impressive performance across the board. What’s even better is that you are getting full support for both DLSS and Ray tracing that will allow you to enjoy the games the way you want to enjoy them.

The 8 gigs of VRAM is plentiful, and the fact that you are also getting HDMI 2.1 makes it the perfect card for higher refresh rate monitors. The single 8-pin connector is another plus point for me because you do not have to worry about a lot of power consumption.

Honestly, after using the iGame GeForce RTX 3050 Ultra for some time, I have to say that the experience has been more than promising with little to no disappointment. My only concern is that the overall color scheme of this GPU is not something that everyone would want.

Overall, though, the iGame GeForce RTX 3050 Ultra makes a case for itself by being one of the most compelling GPUs in the market, delivering fantastic performance across the board. 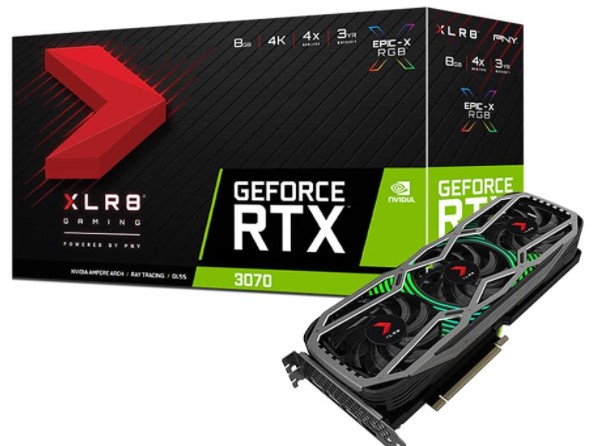 When talking about graphic cards, PNY is one of the companies that has been around a lot longer than some of us might know. However, the company has never really enjoyed the same level of mainstream success as other companies but that does not mean that the performance is not on par. As a matter of fact, PNY GPUs are excellent in terms of their value and the PNY RTX 3050 8GB UPRISING Dual Fan is here to prove just that.

Now, in terms of the specs, the PNY RTX 3050 8GB UPRISING Dual Fan is not something that is drastically different from the other offerings in the market. Sure, the overclocks are not as good but that barely leaves a massive impact on the performance and if you genuinely want something that performs well, this is the one that you should be going for.

I do love the fact that the PNY RTX 3050 8GB UPRISING Dual Fan is a more affordable offering because in a market where a lot of people are paying higher prices, this still makes more sense. However, with affordable pricing, there are some corners cut in terms of the look or factory overclocks but if you genuinely want this card to perform to its limit, it is going to do just that.

In my testing, it is safe to say that the performance remains excellent throughout and there is not a single point where I felt that the card is not doing the job as it is supposed to do. Plus, in games that do support DLSS, this card absolutely crushes the competition because you are getting a massive frame-rate boost without running into too many issues.

The overall thermals on this card are also nice and, in my testing, the card never went beyond 60C. Which certainly is a great thing.

Overall, the PNY RTX 3050 8GB UPRISING Dual Fan serves to be an amazing card. It does have a very minor factory OC which effects the performance by a small degree but nothing that is majorly problematic here.

After spending a good amount of time with some of the best RTX 3050 graphic cards, it is safe to say that Nvidia has done a great job with these cards. I do understand that there is a shortage going on currently but the GPU situation is slowly improving, which ultimately is paving ways for some amazing GPUs that you can buy at the very instance.

If you are looking for a good RTX 3050, we have covered all the best options here so you can make your decision according to your needs.

Yes, if you are looking for a graphics card that would be more than enough in 1080p gaming, then the RTX 3050 is an excellent card that you can use.

Nvidia actually released the RTX 3050 so it can target all the gamers that still play at 1080p resolution.

The RTX 3050 is more than capable of running all modern games at well above 60 FPS as long as the settings are properly tuned.