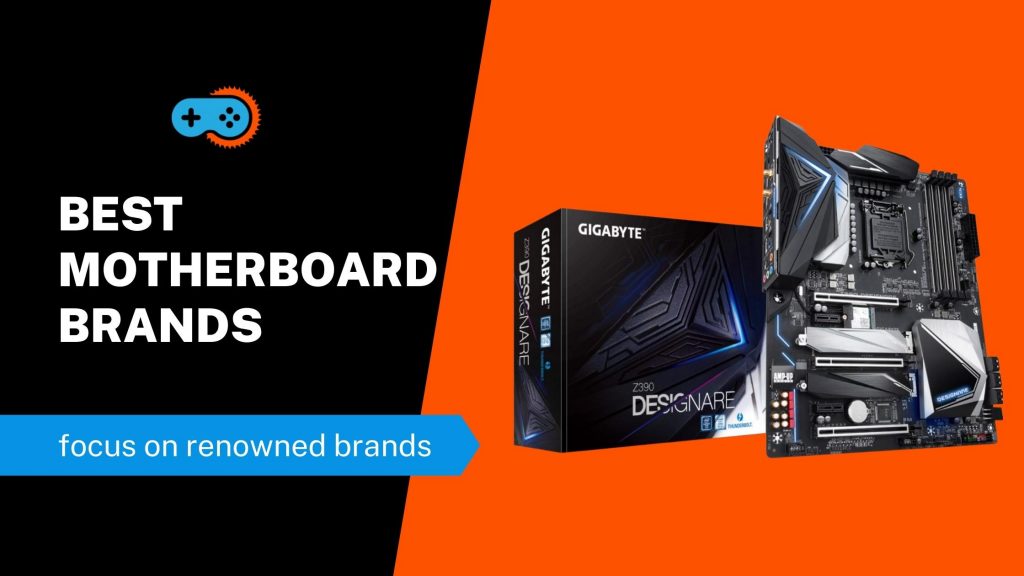 Believe it or not, Brands really play a vital role when you are cherry-picking components for your PC, especially if it’s a motherboard. I remember that ASUS TUF has been doing brilliant in the past years, crusading against Gigabyte and MSI motherboards. But the thing is, some of the lineages of ASUS TUF are pure trash. What happened was that a couple of motherboards were laid out with defiled and run-of-the-pill VRMs, leading to the components dying out way before their expiry date (Although there’s none).

Then there was a huge backlash from the potential customers, arguing and asking for refunds. See, this is what happens when you don’t research properly and just blindly buy off a motherboard. That’s the reason, today we have chosen a very controversial and special topic that will shed light on the best motherboard brands that you can choose in 2021. Before beginning the actual guide, let me rehash a couple of things. Number one, the article will majorly focus on renowned brands like ASUS, MSI, Gigabyte, and ASRock. We won’t be focusing on local brands that are not credible enough to be on this article. Number two, the article will propose an overview of how these brands are faring in 2021, so you really can’t allege us being biased toward any of the brands.

Well, without any further ado, let’s begin the guide to enumerating the best motherboard brands of 2021.

Why is a credible brand so important for your components?

Imagine slotting a derailed motherboard that is so sneaky and might aid in the deterioration of your components. That’s the worst you can do to your components, to be honest. Everything is directly connected to your motherboard. One single fluctuation, and bingo, there goes all your components to ashes. That’s the sole reason why you, in specific, should be rooting for credible and renowned brands.

I’m speaking from personal experience. MSI motherboards are a blessing for gamers. Why? It’s not because MSI has been pitching in GPUs, coolers, pre-built setups, or anything of that sort. In particular, MSI has set a benchmark for many brands, especially how Gigabyte is morphing into something ridiculously better in terms of performance. It’s true that when you are focusing on a lot of entries, your productive level usually plummets down, leading to negative reviews. MSI has experienced this backlash on a couple of B450 motherboards, and they got a chance to redeem themselves, and they did it brilliantly with X570 chipset motherboards.

You can now get hold of wonderful MOBOS for your high-end Ryzen processors because of the polished attitude on the motherboards’ production level. Not to mention, you will come across a plethora of budget-friendly motherboards that will aid you just the same as any other expensive entry. On top of that, the warranty age is breathtaking when it comes to replacement. To be honest, MSI is the best you can get at the moment, so don’t hesitate at all, especially if your eyes have befallen on Tomahawk variants.

Before proceeding to the next brand, let me talk a little about how Tomahawk motherboards can help you in the long run. Basically, Tomahawk is the prime entry sold by MSI, and you can completely rely on it as far as extreme overclocking is concerned. What’s surprising is that most of the Tomahawk motherboards are backward compatible with B450 and older generation chipsets. Not to mention, if you are currently out of credits, you can BIOS upgrade your old Tomahawk motherboard to the latest one without any hardware failure. That’s just wonderful. For what it’s worth, the majority of the MSI motherboards are usually in the range of $150-$300 (The best).

Why should you go for the MSI brand?

What are a couple of defects of the MSI brand?

After a series of ups and downs faced by ASRock in the GPU community, ASRock turned their eyes to manufacturing motherboards. Well, perhaps, this was the best they could have done for their reputation. Still, you will come across a couple of RX5700 XT GPUs laid by ASRock; they are perfectly fine. You can completely rely on their components because they have come a long way.

For the motherboards, you can literally get the best entries to date. It’s been said that ASRock is trying its level best to pitch in user-friendly, robust, and durable motherboards because every component is in direct contact with the motherboard. One single spark or defect means that your components are at a greater risk. For what it’s worth, with ASRock motherboards, you get hold of the ability to transform your components into something extraordinary with the help of overclocking capabilities. To top it off, the RGB compatibility gives your PC an exceptional look and aura. But here’s the deal. ASRock’s proprietary software isn’t the best out there. To be honest, it’s the worst as far as RGB software is concerned.

Still, you shouldn’t fret over just a single feature. As far as examples are concerned, you can take a look at ASRock X570 motherboards, which are literally outshining in the market at the moment. If you are not really into X570 MOBOs, then try ASRock’s X470 Taichi series. You won’t regret it.

Why should you go for the ASRock brand?

What are a couple of defects of the ASRock brand?

Now it’s time to talk about Gigabyte motherboards. In general, Gigabyte’s MOBOs are heavenly and the best to date. Basically, Gigabyte is as popular as any MSI or ASRock motherboard, but the thing is, these motherboards are a little expensive, in general. Again, the gaming community is subdivided into two groups, where the appraisals are at an all-time high for Gaming OC lineage, whereas, on the other hand, VEGA lineage is cursed. The reason is quite simple; you really can’t juggle between budget-friendliness and all high-end features. If it’s cheap, it won’t entail all the extra features, and if it’s not cheap, assume it to harbor every high-end feature. That’s the formula, and Gigabyte was seen breaking it; lest, to no avail.

It’s worth mentioning that the Gigabyte is one of the competitors producing brilliant Intel-infused motherboards. Let’s take the example of Z390 and Z490 motherboards. To top it off, they are equally a preservative when AMD is concerned; hence their X570 lineage is also fantastic. Although it’s true that the failure of VEGA lineage has left some drastic imprints on the reputation of Gigabyte, the lineages like EVGA are still the epitome of perfection. And it was only possible due to the hard work of Gigabyte.

For some examples, you can check the Gigabyte Z490 AORUS pro. The brilliance of 12+1 VRM, and amazing compatibility with Intel Core i9 processors, make the motherboard candy to the eyes. Not to mention, the price tag hardly touches $200! What else can you desire?

Why should you go for the Gigabyte brand?

What are a couple of defects of the ASRock brand?

ASUS is the last brand on the list because there are not many renowned brands in the first place. To begin with, ASUS has been crusading against MSI and ASRock for a long time and has been pretty successful. For what it’s worth, ASUS is pretty much similar to MSI in terms of overclocking potential and aesthetics. You get to enjoy top-notch performance and aesthetics with ASUS’ motherboard alike. To top it off, the majority of the ASUS motherboards are RGB-enabled, indicating the sheer requirement of RGB lights from the user’s part.

Not to mention, the VRMs are the epitome of perfection and never malfunction, which means that you can completely rely on ASUS for years to come. You can take the example of the X570 ASUS TUF Gaming motherboard, which is literally causing havoc in the market. Many of the motherboards were sold on day one, which perfectly tells the tale of success. Last but not least, the majority of the motherboards are user-friendly and cheap; hence, they are available at the disposal of anyone who can’t afford expensive motherboards.

Why should you go for the ASUS brand?

What are a couple of defects of the ASUS brand?

This brings us to a close, but it doesn’t mean that you can’t take help from us. We are always available for you, so feel free to contact us by email or in the comments. I want to reiterate the core idea of the article before departing. Well, it’s always in your best interest to find a feasible motherboard for your processor. Once you have made the selection, it’s time for you to look further into the brands, and believe me, the given four are the best you can get in 2021. Basically, all the local brands are not worth a while and usually die out in a couple of years or months. I can give you the example of Tomahawk from MSI that has lasted for the previous six years without any issues.

All in all, research is your best friend. There are Pros and Cons of every brand, but it’s better to look at the bright side. Happy Gaming!