Best Graphics Card for Call of Duty in 2023 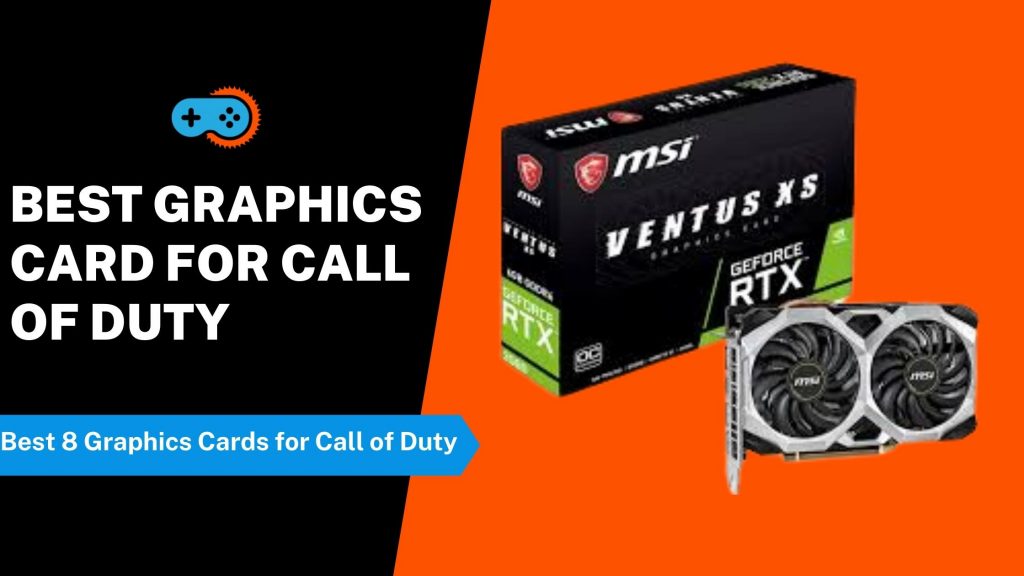 If you are a Call of Duty fan and love playing this then here is news for you that they are coming with another grand release and if you want to enjoy this to the fullest then you must get the best graphic card so that you can experience the best out of it. This will help you play the game more competitively and provide you the desired resolution.

Graphic cards hold vital importance in gaming PCs because you get the most out of a computer if you have a good graphic card. For hardcore gaming and professional video editing, it is essential to get a high-grade graphic card. All the images that you see on your screen are because of the graphic card that is installed.

Getting the right graphic card for your system to get an exceptional gaming experience could get pretty tedious because you have to account for several factors before buying one. To help you find the best graphic card for the call of duty we have done extensive research and shortlisted eight graphic cards so that you do not have to do the hard work. Moreover, we have provided reviews for each card so that you can make an informed decision. If you are in a rush then we recommend you to go over MSI GTX 1050 TI Graphic Card which has 9 sensors to monitor memory and VRM.

List of Best 7 Graphics Cards for Call of Duty

If you are looking for the best graphic card for the call of duty then you have landed at the right place. We have demonstrated the best graphic cards and reviewed each one to help you make a smart choice. Do not forget to check out our buying guide towards the end which is followed by some frequently asked questions. To further help you we have made this handy comparison chart which lists the top graphics cards and highlights their unique features.

So which one is the best graphic card for the call of duty? Let’s find out…

First up on our list of best Graphics Cards for Call of Duty is the Gigabyte Radeon RX 5600 XT Graphics Card which is a reference design of AMD with increased clock speed and memory speed. It uses a Navi 10 GPU and its die is manufactured with TSMC’s 7nm finFET process. It has a total of 36 compute units for 2304 stream processors, 144 TMUs, and 64 ROPs.

The clock speed is 1607 MHz for the game clock and 1750 MHz for the boost clock which is quite impressive because it enhances the performance considerably. For this graphic card, you will require a single 8 pin power connector because this card is rated at 180W. The dimensions of this card are 11 x 4.5 x 1.9 inches which need to be fit in a dual-slot and may not fit in a system with a small form factor.

Gigabyte Radeon RX 5600 XT Graphics Card features a wind force 3 cooler that enhances heat transfer but prevents the critical components from getting heated. Since there are 3 fans because of which the airflow is effective. This graphic card has 3 display ports 1.4 and an HDMI port 2.0 for output. It has additional memory and bandwidth to support 1440p gaming.

Second, on our list is the XFX Radeon RX 580 GTS Graphic Card which is a factory overclocked card with a boost speed of 1405 MHz and GDDR5 RAM from 8.0 to 8.1 GHz. The cooling system of this graphic card is outstanding and makes minimal noise. This graphic card has a power rating of 185 watts.

XFX Radeon RX 580 GTS Graphic Card uses Polaris architecture. With its Radeon chill software, less power is consumed because frame rates are limited in case there is not much movement in the graphic being rendered on the screen which could be a result of many possible reasons. This is an opt-in which means you enable it before playing the game.

This card has a dual-slot cooler with two fans and the backplate is made of metal. The size of the card is larger than the other cards providing similar performance which is not impressive. Installing and removing this card can be troublesome. This graphic card has 3 display ports, 2 HDMI ports, DVI-D port.

Next, we will be reviewing the ZOTAC GeForce RTX 2080 Graphic Card which is one of the top graphic cards because of its high performance. The base clock of this card is 1515 MHz with a boost clock speed of 1845 MHz with 8GB of GDDR6 memory for 448 Gbps of memory width.

ZOTAC GeForce RTX 2080 Graphic Card has 2944 programmable CUDA Cores, 368 Tensor cores, and 46 RT cores. Amazingly this graphic card has 8 Giga rays per second of bandwidth whereas the highest bandwidth of FP32 operations is 10 teraflops. The processing of this graphic card is done with a 12nm process and there are a total of 13.6 billion transistors. The TDP of this card is 225W.

The size of this card is 388mm because of which you will require a CPU with a bigger form factor because it will require 3 expansion slots. This graphic card requires 6 pin and two 8 pin power connectors. You will have to make sure that your PC has the same slots as this graphic card. There are a total of three fans that are less noisy and they maximize airflow.

We will now discuss in detail ASUS ROG Strix RX 5500XT Graphic Card has a lead in the race from many of its competitors and is a product from a well-reputed firm because of its higher boost clock, higher core count, fast memory. This card uses a Navi 14 GPU and has a size of 158 square mm. clock speed is quite impressive with a 1737 MHz game clock and 1845 MHz boost clock.

This card is factory tweaked and has a 2.9 slot which has dimensions of 11 x 5 2.3 inches which are largely owing to large PCB and heat sink because of which it would not fit in small form factor cases. It has 5 heat pipes at the start of the plate which does not let the important components get heated. The speed of the fan of this graphic card can be set to auto or manual.

We will now dig into the details of the EVGA GeForce GTX 1080 Ti FTW3 Graphic Card which is one of the best graphic cards from this company calling it the titan because of the uniqueness of its architecture. This graphic card provides much-enhanced performance from its previous versions because of the substantial improvements made in its design.

EVGA GeForce GTX 1080 Ti FTW3 Graphic Card runs at 11 Gbps which is much faster than the previous version. It has 2 coolers and like previous models, it has 2 slot designs which mean it is not suitable for small form factors. It has 3584 Cuda cores running.

The base overclocks of this graphic card are 1569MHz whereas the boost overclock is 1683 MHz and uses the bus type PCIe 3.0. This card run hit because of which cooling system has been improved. The refresh rate for this graphic card is 240 Hz and is perfect for rendering a high-resolution image on your monitor.

We will now review Gigabyte GT 1030 OC 2G Graphics Card which has a lead in the race from many of its competitors and is a product from a well-reputed firm because of its higher boost clock, higher core count, fast memory. This card has a size of 158 square mm. clock speed is quite impressive with a 1737 MHz game clock and an 1845 MHz boost clock.

This card is factory tweaked and has a 2.9 slot which has dimensions of 6.6 x 4.3 x 1 inches which are small owing to PCB and heat sink because of which it would in small form factor cases. It has 5 heat pipes at the start of the plate which does not let the important components get heated. The speed of the fan of this graphic card can be set to auto or manual.

Lastly, we will discuss MSI GTX 1050 TI Graphic Card as the best on the entire list that we have shortlisted and we have the reasons why. This card has 4 GB of DDR5 memory on a 128-bit interface. This offers 768 Cuda cores and the card occupies 2 expansion slots because of its size and its installation is easier.

MSI GTX 1050 TI Graphic Card has a single fan and because of its small size, it can also be fit in a small factor form. The maximum resolution you can get from this card is 7680 x 4320 p which is quite impressive from a graphic card of this size. This graphic card has 9 sensors to monitor memory and VRM.

The dimensions of this card are 9.01 x 1.54 x 5.16 inches and have a display port, one HDMI port, and a DVI-D port as well. The base clock of this graphic card is 1392 MHz and the base clock is 1290 MHz and the chipset used in this is NVIDIA GeForce GTX 1050 It. This is a high-end high performing graphic card.

We hope you find this article helpful and have established a selection as of yet for the best graphic card for the call of duty. Since graphic plays a vital role in overall performance, therefore, you should get one after doing complete research, therefore we provided reviews for each of the graphic cards

Moving on to the FAQs

EVGA GeForce GTX 1080 Ti FTW3 Graphic Card can be used for call of duty which would provide excellent performance.

Gigabyte Windforce Gaming 1660 Ti would be a nice selection for running 144 FPS.

A graphic card renders the image on your monitor whereas RAM is just keeping the data available to the processing unit. With a higher memory graphic card, you will need RAM enough to be compatible with that amount of memory.