What’s exactly rendering is? "This question usually pops up, but I assume that since you are here, it only directs me to the fact that you would have at least a semblance of knowledge about what’s rendering, and why people do it." 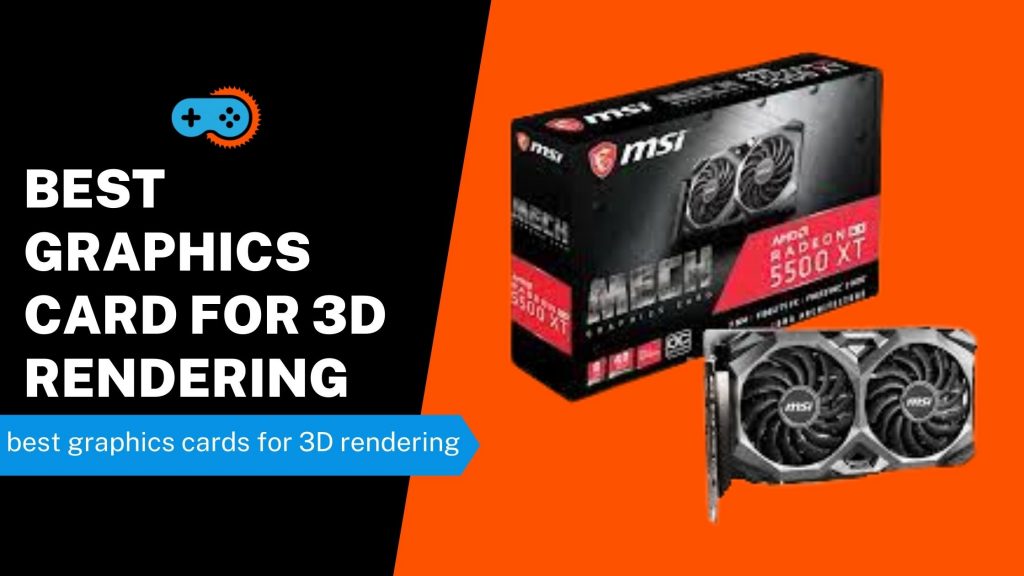 To be honest, I started rendering a few weeks ago on the blender, and believe me, it’s a much-needed skill in such an autonomous era. If you have landed on this page to know in-depth about which GPU to root for when rendering is concerned, then you have come to the right place.

CPU and RAM indeed plays a pivotal role in rendering since all the frames and threads are passed on to the CPU for final processing. In layman’s terms, GPU only helps in giving a smooth texture and a graphical 3D model to the CPU.

Not to mention, you can still render with CPU, but it will skyrocket the overall rendering time since processors do not have proprietary graphical processing units. Anyway, today we will be talking about the best graphics cards for 3D rendering.

Apart from this, We have tested these products extensively, which means you can trust our words, and buy off the products as soon as possible from Amazon.

What’s the reason behind the rampant use of rendering in professional fields?

In today’s world, digital rendering has become a norm, considering its usage in architectural fields. If you are asking, “Which Graphics Cards are Best for Architectural Rendering?” then don’t worry. We’ll tackle each individual field collaboratively since the majority of the time; the cards are the same.

Anyways, from Donuts to billboards, from palaces to gardens, from malls to playgrounds, everywhere the initial step is to render a digital map or a layout for the final product. It has become so important in today’s architecture that nothing feels right or real without putting a visual image before the construction process.

What’s the process of 3D rendering?

It’s not rocket science. In simple terms, all you need is the required PC components and third-party software like Adobe, Maya, or Blender. The process is intricate and isn’t the target for today’s article. For explanation, the 3D rendering process makes use of slices and vertexes to create a final image. These 2D slices are combined together with the help of a GPU and CPU. That’s all for it!

Which card to select For 3D rendering: AMD or Nvidia?

I have personal experience with it. Nvidia’s CUDA cores are all hyped up when compared to the cores implanted in an AMD’s card. When you render on an Nvidia card, it only makes use of CUDA, whereas AMD makes use of OpenCL and OpenGL for rendering. Not to mention, on AMD cards, the blender is 25% faster when put in against Nvidia. You might come across different sites fangirling over Nvidia’s rendering, but believe me, the test is for once on an AMD card, and you’ll know. So, I would recommend you buy an AMD card for rendering. Nvidia will work fine as well, but at the end of the day, it’s your choice.

Now we will be moving towards the actual product review session about the best graphics cards for 3D rendering. Without any further ado, let’s begin!

Nvidia RTX series uses RTX modeling, which indicates that the generated image will be photorealistic. This happens due to the ray-tracing feature, which extensively makes use of a yellow light filter to help you achieve the desired results. That’s the reason why ASUS ROG STRIX GeForce RTX 2080 Ti is on top of the list. Not to mention, 3D rendering also requires enough core processors to finish the final product at the earliest. If you are rendering on a card like Quadro, then do expect it to finish the rendering before the doomsday.

It’s worth mentioning that the card has a whopping 11GB VRAM, sufficient for the rendering process. On top of that, since the card supports VR and 4k compatibility, you can play all the latest Triple-A titles without any issues. Last but not least, you don’t have to worry about the escalating temperatures due to the rendering process. It’s all fine as the card has Axial technology and MaxContact support for reducing the soaring temperatures.

There are hundreds of reasons. To be honest, words will fall short, considering how functional this card is. Not to mention, the recent hype and untamed enthusiasm of the AMD fan group shows that the card is doing wonders. When considering 3D rendering, AMD has always been ahead of Nvidia because it has its own dedicated cores that help in rendering the final project. The card brings in features like RDNA architecture, which is efficient, insurmountable, and perfect. Not to mention, you also get hold of a 7nm chipset, PCI expresses 4.0 support, Radeon Anti-lag feature, and Virtual super-resolution. This helps in providing your system with assets that are needed for rendering images and videos.

All in all, RX 5700 XT is a majestic card that brings in all the recommended and desired features for rendering and gaming.

Like I mentioned while reviewing the first product that RTX GPUs are a mile ahead in terms of rendering, whereas RDNA is still trying to pave its path to success. For now, all the RTX GPUS are known for pitching in the best rendering results, and RTX 2080 super is no different. From the recent results, it can be concluded that the RTX 2080 Super was 20% faster when rendering on blended was concerned. On top of that, the final product was mind-blowing. With its whopping 11GB VRAM, you can possibly do anything as long as 3D rendering is concerned. It’s worth mentioning; you can also play 4K and VR games since the card supports these options; thus, skyrocketing the overall consumer experience.

Not to mention, the card also uses extensive heatsinks to reduce the overall temperature, so you are not at a disadvantage. Feel free to overclock your GPU for photorealistic effects.

As far as the 3D rendering is concerned, in 1660, it’s a win-win situation. Why? Number the one, the card doesn’t cost you much compared to other GPU lineages. Number two, the card is able to render 4k images without any problem. This means that you can use the same card for 3D rendering. On top of that, the results are just the same as what you get on RTX models. The only difference is the yellow light saturation, which you would need to trade-off for buying a subsidized card. It’s worth mentioning that the GPU offers a wonderful frequency boost, which is enough to render seamlessly. I know, right? That’s just applaudable.

In addition to that, you don’t have to worry much about the temperatures, as the card makes use of heatsinks and thermal control modules, which help in reducing the soaring temperatures. Last but not least, you can use the RGB lightning aesthetics by simply using the Redragon center.

AMD RX 580 is a magnificent card when it comes to blender rendering. For your information, the blender is a third-party rendering application that runs way smoother on AMD cards. The recent reports concluded that the AMD RX 580 could render 3D objects at 1080P resolution. Since it’s one of the budget-friendly cards on the list of Best GPU for 3D Rendering, you can’t expect it to shoot at 4k directly. For 4k, we have got RTX and 1660 models for you. Anyway, it’s worth mentioning that the GPU is also able to run games at 1440P, which is commendable for such an old card. Yes, it’s been a couple of years since RX 580’s release, and it’s still functioning well.

Its 8GB VRAM is enough to power on any game and renders at any resolution (except 4k). All in all, it’s a wonderful card you can get hold of in 2021 at a subsidized cost.

The last card product on our list is another RTX model: RTX 2060 Super, which is the foundation of RTX cards. By this, I mean that it’s the first card in the lineage. Since the card makes use of Ray-tracing, it absorbs all the yellow light particles and presents them as photorealistic pixels. It’s worth mentioning that the card has around 1920 CUDA cores, which are way enough to render the majority of the images at high quality. On top of that, heatsinks and cooling options like Axial fan spins help reduce the soaring temperatures. All in all, RTX 2060 is a great choice for enthusiasts.

I would love to mention that the products mentioned above are not the only entities you can get hold of in 2021. The list is not finite and is ever-expanding with each increment in the new products. If you come across any other RTX model like 2070, then sure, you can go ahead and buy it. But I would recommend you to stick to these products since all of them went through a series of rigorous steps for credibility and authenticity. If you think there was something amiss with the article, then do let me know in the comments.

Well, any GPU with ray-tracing or RDNA enabled is best for Architectural rendering. In Nvidia, it’s the RTX series that makes use of Ray-tracing modularity, whereas, in AMD, you can completely rely on 5700 XT. Not to mention, I would still recommend you to root for Nvidia RTX 2080 Ti since i’s one of the best GPUs to exist for 3D rendering.

Yes, it’s possible since the card makes use of RTX properties. On top of that, you can also play VR games on the card, which means it’s one of the top-tier cards to date.

I don’t get it.. The author of this article goes on about how Nvidia is too hyped up and talks about how good AMD is.. But the top choice card is Nvidea and 4 out of 6 recommended cards are Nvidea..

So? Yes, Nvidia is really hyped up, and even if I talk about AMD’s GPU, no one’s going to buy my words anyway. Statistically speaking, people run for the majority, and keeping that in mind, I have recommended the GPUs. On top of that, we have to keep the availability of the products in mind as well. The links are directly related to the Amazon. If an X product is not there, we can’t add it in the recommendations.