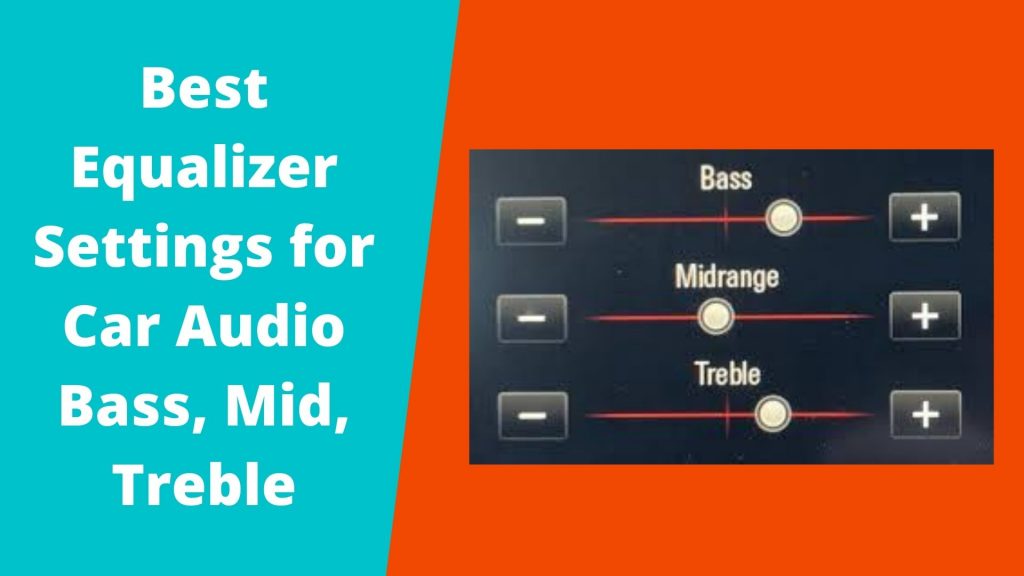 For a lot of us, good car audio is very important. We all know that one person who has decked out their car in the best possible way when it comes to audio. Now, a common issue that most people complaint about is that they cannot seem to get the right equalizer settings on their car audio and this results in the music coming out sounding average, buddy, and tinny.

That is why in this guide, we are going to pay attention to every single setting that you can use to get the most out of your car audio. All the equalizer settings that we will be exploring can be used on pretty much any car audio setup and the best thing is that you are free to explore your own customizations, as well.

It should not come as a surprise but the best equalizer settings for car audio bass, mid, and treble are entirely based on the type of music you are listening to. This means that going with the one-shoe-fits-all approach is not going to work.

That is why, we are going to look at different settings for the most popular music genres and help you tailor your settings accordingly.

Soul has become one of the most popular genres of music over the past couple of years; with strong emphasis on vocals and rhythms and in such a case, you need to be sure that you are able to hear artist’s voice as it is supposed to sound like. Which means that you will be focusing on increasing the mid of the equalizer.

So, what should you do? Well, for bass, you should shift it by an additional one or two points. Mid would need to be increased by two to four points, and bass would need to be decreased by 1 or 3 points. Treble should be dropped by either two or three points.

However, it is important to understand that the aforementioned settings are for 3-band equalizers that are more common in most car audio setups.

If you are using an audio system that has 10 bands, then you are going to need to make more fine adjustments until you get the cleanest and clearest vocals and then adjust rest of the aspects.

Acoustic has also become a lot common in the recent years, especially since independent artists starting recording and posting their own songs on most of the platforms. As the name would suggest, acoustic has a heavy focus on the instruments as well as the vocals. This means that increasing the mids of your equalizer would result in better performance.

If you are looking at a ten-band equalizer, then you will need to adjust the settings to a point that you are getting a small wave near the middle of the equalizer and that should give you a better audio performance.

Classical is perhaps one of my favourite genres and it is a lot different as compared to the previous genres that I have talked about. You are looking at various instruments and vocal ranges. In most of the cases, it is better that you are leaving the equalizer to a point where it is because you would want a flat profile because messing up with it can actually result in the music sounding terrible.

So, what you should do is that in case of a three-band equalizer, adjust the bass with a single increment, the same for mid, and treble.

For the ten-band equalizer, I would suggest that the entire equalizer should show a straight line because although the finer adjustments are there, we do not want the music to sound out of place.

It is safe to say that in the modern day and age, jazz is more or less an acquired taste but that does not mean that we are going to skip the best equalizer settings this time around.

Considering how jazz is largely based on instruments such as trumpets, double bass, and drums, we are going to look towards increasing the bass and treble while dropping the meds.

For a ten-band equalizer, you are looking to achieve a stretched “U” shaped figure and that should get the job done.

Thanks to YouTube and Soundcloud, lo-fi has become a lot more popular, and in most cases, it is independent artists who are producing this music and, in some cases, are covering songs in their own fashion.

Lo-fi music does consist of vocals, but in most of the cases, you are just looking at instruments, then the customization is not going to be that difficult.

The point here is that we are looking to lower both the bass and the treble.

I would suggest that you are going with four increments down on both the base and treble, and no adjustments to mids. If you are on a ten-band equalizer, the aim is to achieve an inverted U.

Who does not love pop music, right? This genre has been around for as long as one can remember and the best part is that pop is among the genres that are still kicking and that is certainly a good thing because of the amazing experience you get.

So, what exactly can we do with pop music in order to make it sound really good? Well, considering how almost all the modern and classic pop music involves vocals, you would need to focus on increasing the mids and lowering the bass and treble.

It is not all that difficult either, for a three-band equalizer, just drop the bass and treble by a single increment, and increase the mid by two increments and you are good to go.

With a ten-band equalizer, you are trying to get a small downward curve with flat edges.

Personally, I have never been a fan of electronic music such as house, techno, and dubstep. However, for anyone who is looking for a good pick-me-up music genre, this works.

You are looking to make sure that you are getting better bass and treble range if you want to get the best experience while listening to electronic music.

So, what you need to do is increase the bass and trouble by around two increments and drop the mid by a single increment. I do understand that it might look like a very small adjustment but it actually makes a whole lot of difference.

I can unequivocally say that rock is perhaps one of the best music genres that has been around for the longest time. It is the genre that paved way to so many other sub genres. Rock music is known for focusing on not just instruments but you are also looking at an emphasis on other aspects such as bass and treble.

What you need to do here is increase the bass and treble by at least two increments and leave the mids where they are.

Remember, rock, due to its diversity, can be a bit more difficult to work with, so keep that in mind before you go ahead and tune the equalizer.

Heavy metal is a lot like rock, as a matter of fact, it is safe to say that both genres are closely aligned and therefore, have sound profile and signature that is actually a lot similar.

However, when it comes to tweaking the equalizer, you need to understand that you are going to have to increase the bass, mid, and treble by a drastic measure. I would say that you increase all three of these properties by at least 5 increments.

If you are using a ten-band equalizer, then I would suggest going for something that creates a flat line after all the sliders are tweaked.

What is the Difference Between a Three-Band and Ten-Band Equalizers?

A lot of people would get lost in figuring out the differences between three-band and ten-band equalizers and to be honest, it is not as complicated as it might sound. The simplest way to tell you the difference is that while the three-band allows you to customize the bass, mid, and treble in their entirety, the ten-band equalizer takes things further and allows you to further fine tune your audio adjustments, it also is more difficult.

The purpose of this guide was to ensure that everything can be as comprehensive as possible. Therefore, we looked all the best equalizer settings for car audio bass, mid, and treble. Using these settings, you will be able to get the sound quality regardless of the genre you want to go with.

You can even make your adjustments if you want the music to sound a bit different.