Best CPU for Editing and Gaming in 2023 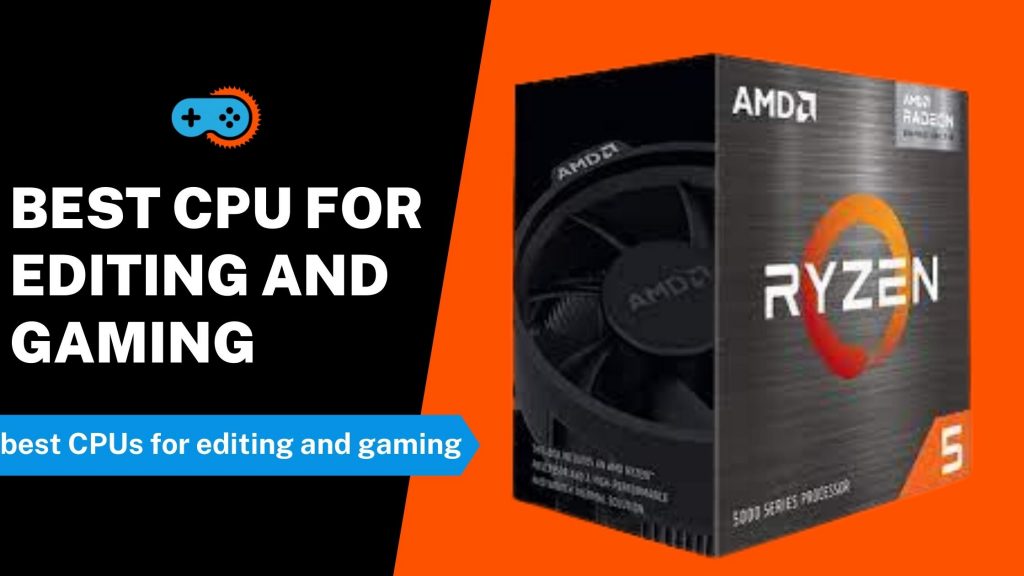 It’s completely reasonable to divert your focus on components like GPU, RAM, and motherboard since they largely make up for your gaming system. I have personally been through this dilemma of cherry-picking the desired component, and it took me ages. Due to that, I couldn’t make much out of my time to select a decent processor. I failed miserably, and then there was no way out but to get a new processor. I can understand the need for prioritizing graphical processor units, but at the same time, negating the central hub of your system can cause severe repercussions. I believe processors are the most vital requirement for establishing a functioning gaming system. That’s the reason why we will be diverting our attention to the most superior and best CPUs for editing and gaming.

What’s the story behind finding a compatible and best CPU for editing and gaming?

To further stress my point, I would like to pin down how a CPU can make the overall system’s functionality a piece of cake. Imagine that you searched every nook and cranny, and turned out that your existence alighted top Intel Core i9. What do you think your system will be like? Like an angel, fluttering its wings across the never-ending ether. The overall performance indeed will skyrocket. But now imagine slotting an Intel Core i3 processor, with 1TB NVMe SSD, 64GB DDR4 RAM, and an RTX card. What do you think will happen now? Sorry, but your angel will collapse and crumble down miserably. Your system will be crashing now and then, causing absolute chaos. Do you understand the point behind explaining the need for having a collaborative and compatible CPU?

Now it’s time for us to turn our gazes towards the best CPUs for editing and gaming. We will be reviewing a couple of entities that are known for being absolute gems in the market. However, they are expensive, still worth a shot.

Imagine working on a threadripper and that too from a 3000 series. Now let’s not imagine, but in reality, but the scene in effect, which can only happen if you are willing to get a majestic and highly efficient chip-3990X. AMD Ryzen 9 3990X is a dream come true, but at the same time can cost an arm and a leg due to its expensive price tag. Well, for the enthusiast, the price doesn’t matter. And if you are one of them, I would highly recommend you to buy Ryzen 9 3990X as it’s one of the top-tier processors for gaming and editing at 4k.

The processor offers a whopping 64 cores and 128 threads, making the overall task-tending time plummet down by 75 percent. The number of threads indicates how efficiently the processor is catering to tasks, and with that number, your system is definitely going places. Not to mention, the base frequency of the threadripper stands at 2.9 GHz and can be topped to 4.3 GHz. On top of that, the processor includes an sTRX4 package module and PCIe 4.0 for enhanced connectivity. Last but not least, you can pair up this processor with a maximum of 4 DDR4 RAM modules.

In stark contrast, Intel Core i9-10900k is a little lenient in using the hyperthreading module. I’m not saying it doesn’t exist, but when we consider algorithms for rendering and gaming, Intel seems to be lacking at times. Perhaps, this didn’t stop Intel from still being on the top. Intel Core i9 and Ryzen 9 are believed to be on the same pedestal of performance from the recent reports. If you can’t afford a threadripper as of yet, Intel Core i9-10900K is a much-suited substitute as of now. Not to mention, the processor can overclock its base frequency to soaring heights. Exactly, at 5.3 GHz, which is far more than the achievable frequency one can get on Intel processors.

It’s worth adding that the processor has around ten cores and 20 threads, which are ample enough to run multiple processes in a given time. In the recent reports, Intel was able to tackle AMD Ryzen 9 by 15% on gaming. This means that for gaming and editing, Intel Core i9 is equally recognized for such niches. Last but not least, you can slot up to 128GB of RAM with intel processors since it supports the concept of a dual and quad-channel. All in all, it’s a wonderful processor to get hold of in 2021.

Intel Core i9-9900K is another formidable entity on the list. Well, you must be wondering why I’m only proposing top-tier and expensive products. The reason is quite simple. For high-end and 4k gaming, with an allowance of smooth rendering performance, only products that offer withstanding properties can achieve such claims. That might not be possible for Intel Core i3 5th generation, or even 10th generation. Don’t worry; we will be talking about AMD’s most budget-friendly product that offers both gaming and editing modules at an approachable margin.

For now, let’s focus our attention on the specifications of Core i9-9900K. The processor offers you eight cores and 16 threads, which is sort of enough to power on your gaming pc. Not to mention, the same cores and threads will help you achieve seamless rendering time. On top of that, the base frequency at the processor works is 3.60 GHz and can be cranked up to 5.00 GHz on turbo mode. This is commendable, in my opinion. It’s worth mentioning that the bus speed stays at 8 GT/s and uses 95W TDP in general. In conclusion, it’s a marvelous processor.

It’s time to welcome another threadripper into the list. Well, AMD Ryzen 9 3950X is a great deal when considering the number of cores and threads available. It comes with a whopping 16 cores and 32 threads, which is sort of a dream come true for enthusiasts. In professional terms, the processor uses hyperthreading, which reduces the rendering time by 70%. It was recorded on the blender that the donut rendering took barely a second. That’s just appreciative, in my opinion. Not to mention, the base frequency of the processor stays at 3.5 GHz and can be increased to 4.7 GHz. I guess the boosted frequency is just shy of 0.3. Otherwise, it would have overhauled Core i9-9900K.

Anyways, you can slot up to two memory modules, which means that the processor does not support the quad memory channel. You would have to work with only two 16GB or 32GB RAMs. In addition to that, the processor also makes use of the PCIe 4.0 version, which means that you can slot the RTX 3000-series card without any issue. All in all, it’s an artistic processor. Grab it already!

I was talking about this processor. I know it’s not Ryzen 5 3600, but it still belongs to the same lineage (3rd generation). The only difference is that it also is one of the threadrippers but comes at a subsidized cost. This product is the most budget-friendly processor you can get on the list. Anyways, moving towards the specifications. The processor makes use of 6 cores and 12 threads. This indicates that it’s a perfect match for editing and gaming niches. It’s worth mentioning that the memory specifications can only shoot up to a single channel, which is sort of a bummer. Nonetheless, it’s a great processor.

Finally, the processor supports the latest GPUS insertion, which means you still have a shot with the RTX series. Good luck!

Piecing out the final evidence

I hope the article was crystal-clear in every aspect. I tried my best to put forward products that are internationally known for being good for editing and gaming. Not to mention, these products went through a series of rigorous processes. I also ensured that each item does not entail any bad reviews. All in all, these products are clean and a must-go-to. Anyways, the list is not finite, which means you can still select any other product as long as it suits the purpose you are building your system on. If you think there was something amiss with the article, let me know in the comment sessions.