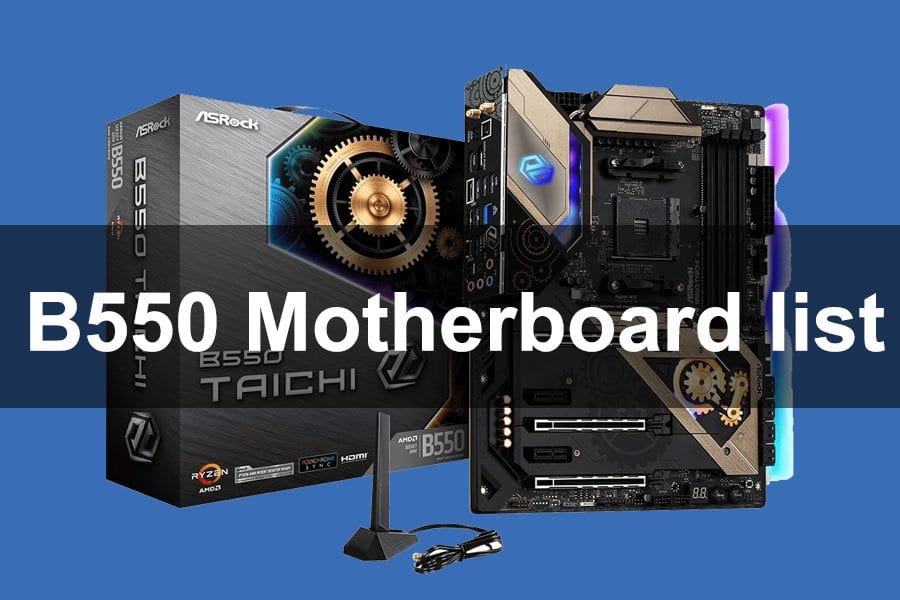 After the success of the B450 chipset, B550 made its first-time appearance in June 2020 and turned the odds against Intel. Basically, B550 is a refurbished and exemplary entity that marvelously succeeds B450 in every way, including the PCIe 4.0. Yes, with the B550 motherboard, you get hold of PCIe 4.0, which is a crucial expansion port for all the high-end components.

For what it’s worth, the B550 chipset offers the same budget-friendly formula to the users, despite being higher in the lineage. This means you don’t have to worry about not experiencing the astounding nature of the B550 chipset. The same thing applies to the price-to-performance ratio. In layman’s terms, you are getting two-fold the performance at the same price point of the B450 chipset.

Not to mention, before moving on toward the tier list, I would like to enumerate the core features of the B550 motherboard. This will make sure that you remain on the same page and understand the vital elements that go into making a motherboard.

The Core Elements of the B550 Motherboard

To begin with, the B550 chipset entails the PCIe 4.0 expansion slots with 20 lanes. Basically, you get hold of 4 lanes that have uplink orientation and 16 lanes for storage support. It’s worth mentioning that the B550 chipset also slips in PCIe 3.0, and that is to be used for general slotting. On top of that, the chipset also pitches in 2 USB 3.2 Gen 2 ports, 6 USB 3.1 Gen 1 ports, 6 USB 2.0 ports, and up to 8 SATA ports (inclusive of other ports as well).

Do you know what’s surprising about the B550 chipset? With this chipset, you can kick off your gaming setup with a dual GPU configuration. This means if you are into creating animations or playing games at Ultra settings, the B550 chipset will be the one making things easier for you. I know the dual GPU configurations were only meant for chipsets with the “X” variant (for example, X570), but you are not getting it on the “B” series as well. What a game-changer!

Well, my final verdict would be that the B550 motherboard is a watered-down version of the X570 chipset and brings in nearly all the required features for high-end gaming.

The golden tier consists of those motherboards that are within your reach. Basically, they are neither expensive nor cheap but fall in between. Not to mention, the golden tier products uphold the notion of absolute integrity, which means by buying them off, you won’t be disappointed. For what it’s worth, they are as credible as any platinum product and harbors all the required features for mid-high-end gaming. Last but not least, these motherboards are robust and highly recommended for those who have just started PC gaming.

This tier focuses on budget-friendly and in-reach entries, which means that you can easily buy them off from the market. Not to mention, these products also feature all the required expansion ports and USB Gen types. But do remember that they do not really have a lot of value-added features. Basically, it’s like having a 50-50 chance over getting a high-end motherboard at such a low price point. You know, completely probabilistic. It’s also worth mentioning that these entries are as credible as any other product in the previous tiers and can easily last for 2-3 years.

Well, I don’t want to repel away from potential buyers by demeaning the performance ratio of these products. These products are 90% functional and can malfunction at times, so there’s that too. Apart from this, you can rely on these motherboards to easily survive a couple of years, and not more than that because, sooner or later, you will be in need to upgrade to a more refined and functional motherboard. Last but not least, you don’t have to worry about credibility. These MOBOs are amazing nonetheless.

I really hope that the tier list was crystal clear and gave you a deeper insight into the innumerable options available when the B550 chipset is concerned. Although, I would still recommend you to root for the X570 chipset as it’s much faster, cleaner, and superior to the B550. Anyways, that’s the debate for another time. If you have any questions, do let us know in the comment session!

ASUS ROG Strix B550-XE Gaming WIFI in golden tier? There is no better mobo in Platinum tier specially for overclocking.

All of the motherboards mentioned in the Platinum are good for overclocking. Without testing, we don’t recommend products. On top of that, ASUS Rog Strix B550-XE is a worth a while motherboard if the user really know how to use it.