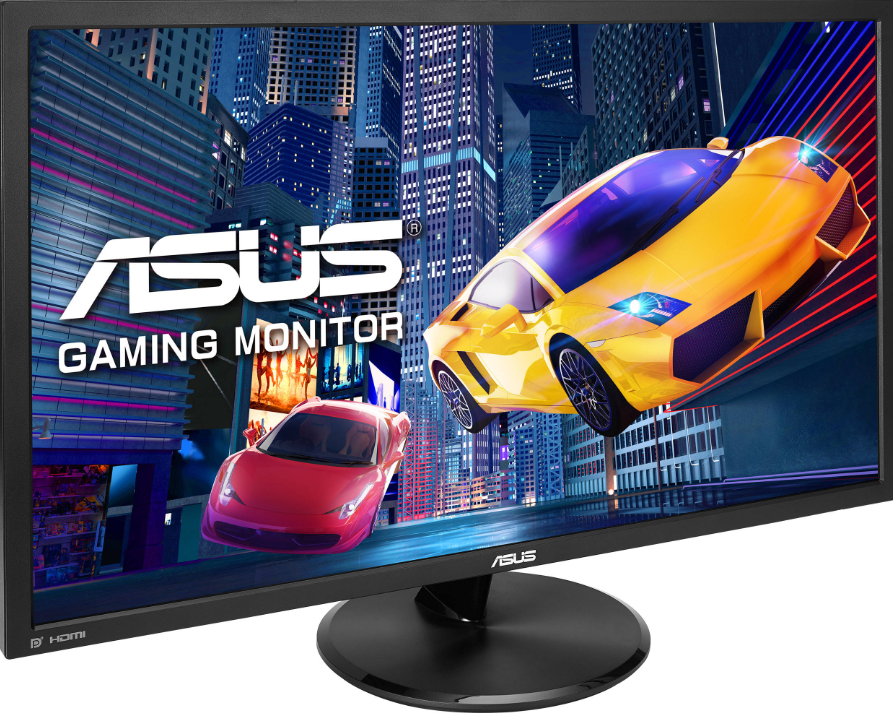 AMD’s Free Sync-an adaptive syncing technology that reduces shuttering and tearing when two different refresh rates are put together-anti-tearing technology has caused turbulence in the markets. It’s a 28-Inch gaming monitor with a 1ms refresh rate making it suitable for gaming purposes. Asus VP28UQG fashionably uses Twisted Nematic (TN) panel which offers clear visuals and sharp images even on wide angles. Whether you are a console gamer or a PC lunatic, this monitor caters equally to everyone. The epic feature it brings with its existence is the 4K support which allows gamers to sync their gaming experience up to their expectations.

Notwithstanding, apart from the 60HZ refresh rate, the model is earned with discrete 3 video inputs giving you an edge over other users with a superior 300 cd/m2 peak brightness feature. When 4k support is concerned, you can expect up to 3840 X 2160 resolution which means a lot for a gamer to render the graphics.

Surprisingly, Asus is known for its products such as motherboards, Rams, Graphics cards, and other high-end technologies. So, when you question the reality and credibility of their products, they are unparalleled. There is no room for errors. You can trust their words and expect the features which are written in the manual guide. The same is the case with the Asus VP28UQG which is another phenomenal product in today’s market which is competing against flagship models. The rest of the article will further elaborate on the functionality and the features of Asus VP28UQG.

The behemoth screen proposes high-definition visuals. It’s due to the technology used inside the monitor which generates a multitude of pixels to cater to your need. It can shoot up to 3840 X 2160 resolution creating a 3d-esque environment to watch. The 4k support generates 157 PPI (pixels per inch) which is a bit less than the flagship models but is best for budget gamers.

To our surprise, the monitor also makes use of “Eye Care technology” which helps in reducing the stress on the eyes due to prolonged screen time. You can also use night and day modes with 4 additional filters to match your priorities. Not to mention, the incorporated TN panel supports up to a 10-bit color ratio giving around 1.10 billion colors to select from. The combination of these colors helps in generating the perfect and real-time images on the screen.

Lacking major aesthetics, the product can still project its beauty in new ways. It has a 2.5-inch thick cabinet with 0.5-inch bezels anti-glare coating which protects it from scratches and dirt alike. In addition to that, it also has 25 degrees compound tilt which enables it to rotate at a higher rate. Besides this, there are I/O ports that are located at the rear end of the cabinet. From there, you can discern two HDMI inputs, a display port input, and a headphone jack paired with labels. There’s a little problem which makes it not as per the mark, and it’s the invisibility of inbuilt-speakers. There are none, but the features that the Asus VP28UQG is providing for the price is agreeable.

What makes the product worth using? It’s nothing, but the incorporation of AMD’s Free Sync technology. To battle against Nvidia’s G-sync technology, AMD released their own. Both the technologies help in fixing the tearing ratio on the screen. It happens when there’s a mismatch of the refresh rate of the monitor with the graphics card. Due to this artifact like split screening is visible which makes the experience hollow and dreadful. To eliminate such possibilities these technologies, help in minimizing the tearing ratio and equate both the refresh rates concurrently for better performance.

The only difference between the two technologies is that for G-sync, the graphics card automatically handles the refresh rate, but for Free-Sync you will need a monitor, like Asus VP28UQG, to eliminate the tearing possibilities. In short, Asus VP28UQG can handle the Free—Sync skillfully if you have an AMD card with, support drivers and software installed on your PC. This helps you achieve the best possible refresh rate in games without split-screening.

While gaming most of the time, gamers require a few presents and value-added supporting features to help them in the overlay. Asus VP28UQG brings embedded Game plus relay which consists of customizable crosshair overlays with dedicated time, and an FPS counter. This counter helps in monitoring the average generated Frame rate per second for your games.

Moreover, the feature of HDCP 2.2 allows you to stream your content on Netflix, Amazon Video in ultimate 4K resolution. This means that if you are making a livelihood through gaming, then Asus VP28UQG can help you achieve your dreams.

Furthermore, there are 8 pre-installed picture presets which help you change the screen mode as per your requirement. You can shift the current preset to Scenery, Reading, SRGB, Standard, Theater, Night, and Game mode.

The performance quote provided by the Asus VP28UQG is up to the mark. The past anecdotes have vocalized to their best. It performs above the margin on PCs because of the graphics card and the refresh rate with 1ms pixel response rate. Games like Assassins Creed Odyssey and Red dead redemption were treated equally by the monitor. When the 4k option was turned on, the monitor performed at its peak without ghosting or comprising the pixelated screen.

Some of the colors stand out of the spectrum and they somehow make the screen look dingy, but in reality, it’s not. The technology is feeding on whatever it gets, and somehow ignore the possibilities of using red and green lights, leaving behind only the blue one. Regardless, the saturation levels are low which makes it best for gaming purposes.

Surprisingly, there weren’t any recorded tearing and stuttering when the AMD Free-Sync featured was turned off. It was obvious when games like Dragon Age 3 and Grand theft auto V were running without the featured turned on, giving them a refreshing look. The pixels were smoother and aligned. So basically, it means that, as far as the games are fulfilling the base requirements, you are not in a need to set up your monitor to a boost mode. It’s completely fine if the Free-sync feature remains dormant for certain tasks.

As far as the response lag is concerned, the monitor gives around 27.4 milliseconds lag which makes it still a decent product. It also draws a standard amount of power from the power supply, so as long as you have stocked up some extra watts, your monitor will do its job without having a breakdown.

Some of the Standout Features of Asus VP28UQG

Some of the features were already explained in the above portion, but what makes it a competitive model? For a subsidized price tag, it’s rare to get something like this, especially if its harboring AMD Free-sync and eye care technology. The smoothing features give you an edge when compared to other users who are using below-the-belt products for the same price.

The monitor has definitive colors that can spring according to the requirements. As far as portability is concerned, you can shift as per your will wherever you want. The dimensions are as follows: 26 X 2.5 X 15. Not to mention, it only weighs around 10.1 pounds which makes it a light-weighted monitor, ready to be carried anywhere.

Additionally, you can decorate the monitor as well, as it comes with an LED slot which is situated below the base. The led gives a loving vibe and special aura to the air. It’s also noted that the flickering remained static throughout long gaming sessions. If you had problems regarding tearing and split-screening, then how about you simply go for Asus VP28UQG?

The Asus VP28UQG is a recommended choice for both gamers and professional editors. The aforementioned features are paramount when paired with AMD Free-sync and a potential high-end graphics card. Some of the reviews recorded unusual flickering and a lowered 4K performance, but it usually depends on the system you are using the monitor on. It necessarily doesn’t connote to it being a flawed product.

The colors and resolution prescribed in the manual are oddly satisfying when they are put into action. You can experience sharp details and 100 percent accurate graphics on Asus VP28UQG.

All in all, it’s a great choice for budget gamers and renderers!

What’s the average score given to Asus VP28UQG?

Reviewers have rated it a good 8 score out of 10 for giving phenomenal features at such a subsidized cost.

As far as the overall performance is concerned, it’s decent. You can render and game at the same time with a constant refresh rate.

How long the monitor works?

It entirely depends on the usage. But it’s said that you can take out around 4 to 5 years easily.